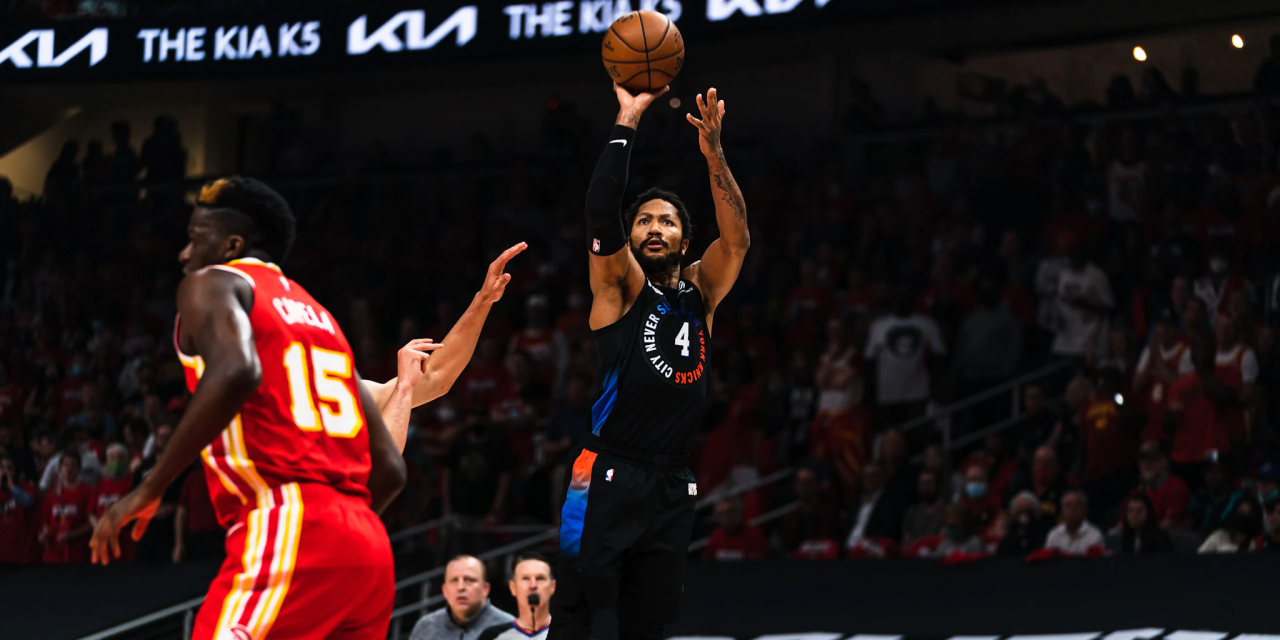 The Knicks’ offense was putrid for a single quarter on Friday, costing them Game 3 in Atlanta. In order to fight back, the fire needs to be restored.

ATLANTA, GA. — The New York Knicks only lost a single quarter in their Game 3 defeat at the hands of the Atlanta Hawks.

But it was a costly quarter.

“The second quarter, we did not play well,” Knicks head coach Tom Thibodeau said after practice on Saturday. The Knicks were outscored 29-13 in that period.

A starting lineup shuffle, due in part to a limited role for center Nerlens Noel following an ankle tweak, saw Derrick Rose and Taj Gibson, former Chicago Bulls teammates under Thibodeau, start at point guard and center, respectively. There is no argument that Rose has been the only consistent force on offense for Thibodeau’s Knicks through three games, but without Rose plugged into that second unit—assuming he’s not playing 48 minutes—New York’s offense is going to suffer barring creative adjustments.

Interestingly, New York’s defense is right around where it was all season long (105.9 Defensive Rating in three games; 107.8 DefRtg in the regular season—both ranked fourth). The problem is Atlanta’s DefRtg ranks even above New York’s—1.7 points better. Now, this is more of a process of playing the same team three straight times, but with the Knicks offense plummeting (only second-worst among playoff teams to the now-eliminated Miami Heat), only improved firepower among members of the team will pull them out of the reaches of a potential 1-3 series deficit before heading back to the Big Apple.

"You always have to do what you think is best for your team … Elfrid is a critical part of the team, he's had a very good year for us.

"We've asked everyone to sacrifice and put the team first and he's done that. We have great veteran leadership."

Perhaps shifting Rose into the starter’s role disrupted the flow of New York’s offense by removing him from the bench unit.

So, could the bench help? It did, with Rose’s part as the leader of the second unit, outwork opposing second-stringers during the regular season along with the Game 2 win. “Our bench has given us a big boost all year long,” said Thibodeau. “We know how gifted [Immanuel Quickley] is offensively. When his shot’s there, don’t hesitate, just let it go.”

The rookie guard shot just 2-of-8 on Friday, scoring four points. While fellow rookie Obi Toppin’s star has been rising during the playoffs, Quickley, after a couple of triples in Game 1, has seen issues helping the offense off the pine.

Three-point shooting in general—an area the Knicks ranked third during the regular season (behind the Clippers and Nets)—has hurt New York in this first-round series. Shooting 9-for-30 in yesterday’s loss (with the starters shooting 8-for-23), has shaken the foundation of an improved outside-shooting Knicks offense, which carried the development of critical players like Julius Randle and R.J. Barrett.

Another regular-season above-40.0% three-point shooter, Alec Burks, who was nearly Game 1’s hero with 27 points off the bench, went cold in Game 3 like Quickley. With eight points on 25.0% shooting from the field, Burks is an easy candidate to pick to lead the second unit while Rose is resting (which isn’t long, as Rose played 39 minutes).

It comes down to hitting your shots, though. Randle, who Thibodeau called the team’s “engine,” put up a dud on Friday—14 points on 15 shots (two makes), 11 rebounds, and two assists. The 2020–21 NBA Coach of the Year finalist offered advice to the first-time All-Star: “Just be Julius. I don’t want him overthinking it. Play freely, let the game come to you … sometimes you’re going to get your shots, sometimes you got to make the play.”

With Randle seeing quick double teams to start off possessions and Rose now playing with the starters, the offensive burden doesn’t fall on one person, but the team. Whether on the road or at Madison Square Garden, the difference in the series is hitting shots, something Randle and Barrett have done impressively for 72 games.

“I’m always confident in my game, confident in my team. We’ve been doing it all year … we’re in the playoffs for a reason,” Barrett, playing in his first playoff series, said. The sophomore swingman scored seven points, as he combined, with non-Rose starters, to score 36 points, barely eclipsing Rose’s personal 30-point performance. Barrett, who shot 40.1% from three in the regular season, has gone ice cold from deep—four for his last 16 attempts from downtown, via NBA Stats.

“By the end of the day it’s all effort, energy, and being tough,” said Gibson. “It’s the playoffs, you’re going to continue to see the same plays, same personnel over and over again. … It just comes down to how long you can continue to swing and continue to fight.

“It’s all about who can fight the longest,” he added.

The Knicks look to counter with a punch of their own to tie the series at two games apiece on Sunday at 1 p.m. ET.

»READ: After Game 3, R.J. Barrett is the key to getting back on track