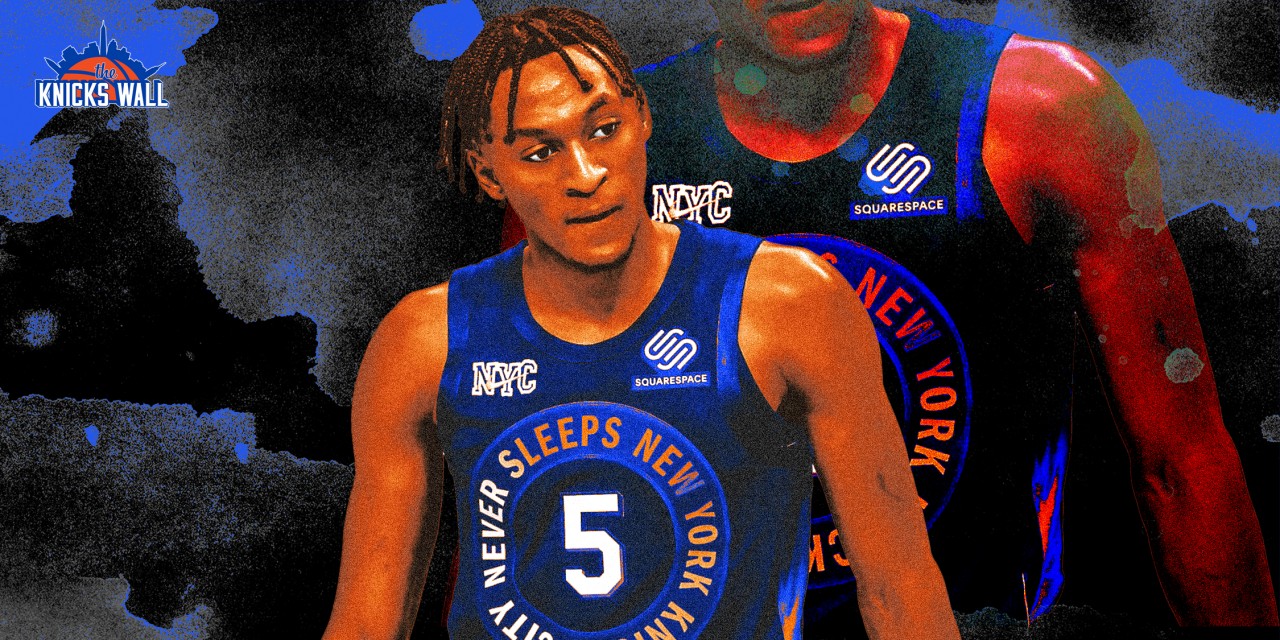 Immanuel Quickley has had a flawed rookie season, as most novices experience, but there is no reason the Knicks guard can’t improve.

This has been a season of defied expectations for the New York Knicks, and not in the self-delusional or self-destructive manner fans have been forced to grow accustomed to over recent years. Julius Randle is a candidate for an All-NBA team and the Most Improved Player award, R.J. Barrett has proven himself an elite young player (regardless of what you might read on ESPN), the veteran additions of Alec Burks, Derrick Rose, and Nerlens Noel have come up huge time and time again when called upon, and, entering the final quarter of the season, the Knicks are firmly in the playoff mix for the first time since the halcyon days of Carmelo Anthony’s prime. Currently slotted at eighth in the East, only one game separates the Knicks from the fifth-seed Heat, and only 1.5 games separate them from the ninth-seed Pacers.

A tough stretch of games against top teams in the Eastern Conference slowed some of the Knicks’ first-half momentum, and the final 17 games won’t be much easier: 11 come against playoff teams, including two games against the red-hot Suns, one game apiece against each Los Angeles team, and one against the retooled and revitalized Nuggets, and even the non-playoff teams they are set to face off against are still formidable. The Spurs, Bulls, and Pelicans are all teams fighting for a play-in spot, and all three have a puncher’s chance against most teams in the NBA. The Rockets stand as the lone bottom-feeder team the Knicks will see between now and next season, which means they’ll need to be on their A+ game from here on out.

Which brings us to another member of the “defied expectations” club, one who will prove a major x-factor entering this pivotal stretch of games.

When Immanuel Quickley was drafted at 25, it was seen as a major reach by most people who pride themselves on their draft acumen, including yours truly. But through the first 50 games of his career, he’s proven any such concerns to be completely unfounded. Quickley is fourth per game in rookie scoring while playing nearly 10 fewer minutes than the three guys ahead of him, fourth in made three-pointers, second in made free throws, first in free throw percentage (minimum 10 attempts), and eighth in assist-to-turnover rate (minimum 30 games played). By virtually any measure, Quickley’s rookie year has been a massive success, and if the Knicks were the Knicks of yesteryear—a.k.a. a rebuilding team—that would be enough.

But this is a brave new world of Knicks fandom, and while an overachieving rookie is a win for any team, the stakes are about to get a whole lot higher, as is the bar for success. After all, not many rookies are counted on to be a consistent source of offensive output in the playoffs, even off the bench.

Some are, for sure, as Tyler Herro and others have shown us recently, but it remains more the exception than the rule. This is why it’s going to be important for Quickley to focus on a couple of key areas heading down the home stretch in an attempt to build some consistency, keep Tom Thibodeau’s trust, and potentially swing some games if and when Randle and Barrett aren’t able to do it all themselves.

Drive With Purpose, AKA Chill On the Trae Young Tomfoolery

Quickley, as a rule, doesn’t love getting into the paint. He prefers to do his damage from three-point range, and if run off the line, to go to his patent floater or try to draw a foul. While this works for him more often than you’d expect, there are still a few problems with it as a general strategy.

The first problem: it makes his game entirely too predictable. Teams have already started playing the floater and working to avoid his admittedly All-Pro level foul-baiting, and this game-planning against him will only intensify should the Knicks reach the playoffs.

The first half against Toronto showcased some of the habits he falls back on at his least effective: the drives with no plan, the prioritizing of drawing fouls overworking for good shots, the frustrations that come when you rely on the refs to bail you out:

That disparity would be somewhat frustrating under any circumstances but is made more so given how lethal a free throw shooter Quickley is. If IQ could start driving hard to the basket from time to time, it would open up dump-offs, allow him to get to the line, and would even give him more room to get his floater off when he chooses to go to it.

That last sentence is important because I’m not arguing for Quickley to excise the shot completely from the repertoire. When he keeps his concentration and shoots it purposefully, it’s a powerful weapon, one that has helped the Knicks many times over the season.

But variety is the spice of life, and especially so in the NBA playoffs when teams focus on taking away your first and second options and force you to start improvising. Quickley needs to get less predictable and more dangerous, and it starts with getting to the basket.

It’s no secret that the most deadly part of Quickley’s game is his three-point shooting. The Knicks have been looking for a sniper out of the backcourt for years, and in Quickley, they have one. And for all the hemming and hawing about whether or not he’s a point guard, the fact of the matter is that with playmaking wing/forwards like Barrett and Randle as the team’s two best players, he doesn’t really need to be. But, partially due to lineup decisions and partially due to his own proclivities, IQ doesn’t always play into his strengths or isn’t always played to his strengths, as much as one might like.

The clearest example of this is the way his three-point attempts are distributed. Nearly 31% of Quickley’s field goal attempts are pull-up threes, compared to just 19.2% being catch and shoots. That’s a difficult shot diet for anyone, let alone a rookie, and the impact can be seen in the percentages: Quickley shoots 31.5% on pull-ups versus 45.1% on catch and shoots.

QUICKLEY PUTTING THE OFFENSE ON HIS BACK 🎯🎯🎯 pic.twitter.com/6Z97RxmJLA

Now, don’t get me wrong, Quickley being a confident and capable pull-up shooter is huge for an offense that can bog down at times. But if Quickley can become a more dangerous movement shooter, not only will it help his individual shooting splits, but it will also open up the floor for everyone around him. His gravity will shift the balance of the defense, and Randle and Barrett have shown themselves to be up to the task of finding their open shooters for easy looks.

The problem is: being a constant mover like Stephen Curry or J.J. Redick isn’t easy. If it was, every shooter would do it. It takes a ton of conditioning and a ton of mental discipline, as well as a coach that actually wants you to use your energy sprinting around like a maniac without the ball in your hand. But while the final point may or may not be the case, I have no doubt that Quickley has the physical and mental stamina to thrive in that role, if it’s the one given to him.

Keep Ya Head Up

As for the aforementioned point guard questions that linger around projecting Quickley’s future, it’s true that between Randle, Barrett, Derrick Rose, and (I can’t believe I’m saying this) even Alec Burks, there’s less need for Quickley to be a Point Gawd, but he does need to continue to work on his playmaking. Quick is sometimes a step slow reading shifting defenses, but he has also shown the ability to improvise great reads on the fly, especially when it comes to finding big men on lobs.

QUICKLEY TO OBI FOR THE OOP pic.twitter.com/CBtGWFYHpe

But it’s reads like this unsuccessful attempt to Obi Toppin that are most exciting (and not just because someone has finally started consistently finding Obi on the lob!).

Here Quickley leverages the threat of his floater while having the weak side cutter in his eye the entire time. The anticipation, as well as the backup plan he leaves himself in case the lob doesn’t materialize, is exactly what the team needs from him.

The chances are, Quickley isn’t going to be a good enough pure scorer to be a positive-value starter if that’s all he brings to the table—and that’s not a knock on him, it’s just that it’s really fucking hard to be so good a scorer that you don’t need to do anything else. Even professional bucket-getters like his idol Lou Williams bring a ton of pick-and-roll playmaking to the table, as we saw in his time with the pre–Kawhi Leonard Clippers. If Quick wants to take the next step and to be a guy who impacts playoff games, rebalancing the scoring and facilitating, if only slightly, is going to be huge.

Whatever happens as this season winds down, it’s clear that Immanuel Quickley is a keeper moving forward. His confidence and poise are perfect complements to Barrett’s, and as the game slows down in year two, he should learn to pick his spots better on his forays to the rim.

But right now the team is focused on the playoffs, and for Quickley to keep Thibs’ trust down the stretch and become the x-factor he clearly has the potential to be, it’s important for him to iron out a couple of these little wrinkles in an attempt to add a little consistency to the already potent mix. Don’t be surprised if he swings a playoff/play-in game with an offensive explosion either way, but if he can stay focused and intentional, he could be instrumental in extending the Knicks’ season as far as it can go.