For Kevin Knox, Patience Is Key for the 19-Year-Old’s Growth 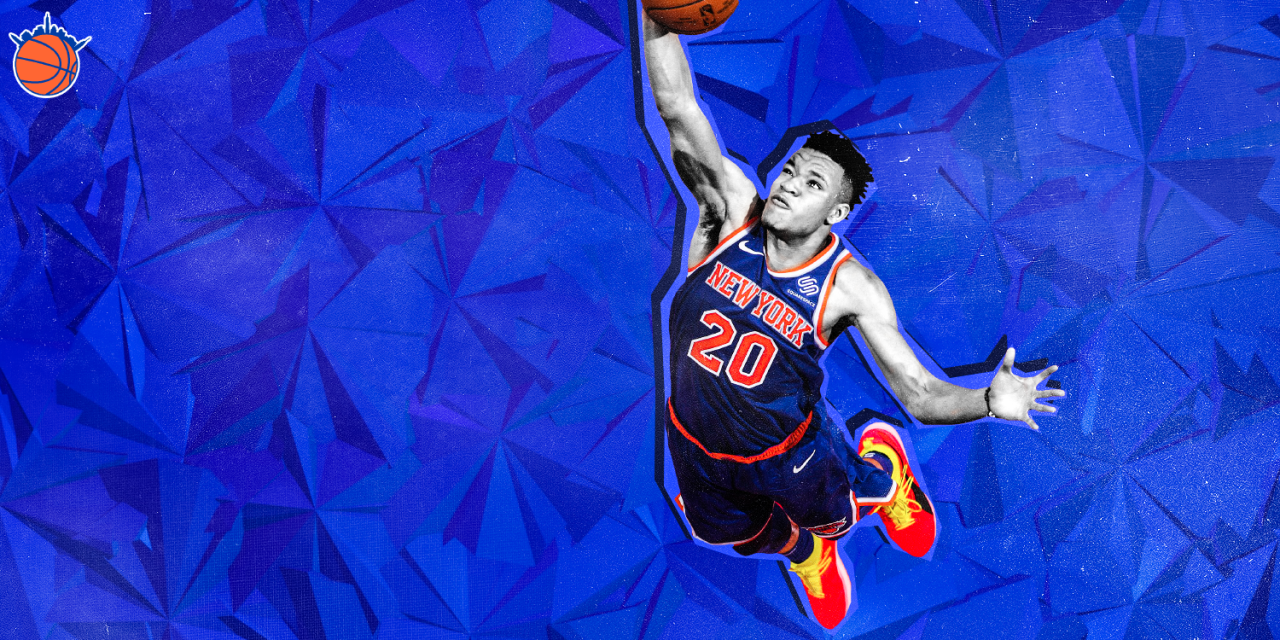 Kevin Knox hasn’t exactly exploded on the court since his Summer League breakout. What’s up with the rookie, and how could Coach Fizdale push the envelope with the 19-year-old?

Kevin Knox was supposed to get thrown to the wolves. The original plan was to start the rookie from the jump and let him “take his lumps,” as David Fizdale put it. An ankle sprain pumped the brakes on his fast track, but he’s finally in the starting lineup and back on track. The early results have not been pleasant.

In the three games Knox has started, the Knicks are 0-3 with a catastrophic 123.6 Defensive Rating (DRtg). Knox in particular has been suspect defensively. In his first start he was slotted at the 3 but was spared the assignment of Paul George (Tim Hardaway Jr. was assigned that dirty job). He had early success in New Orleans while Nikola Mirotic was out there before getting bullied by Julius Randle, his Wildcat brethren.

Aaron Gordon was a problem Knox couldn’t hide from; he took the rookie to school. Gordon’s perfect start to a 31-point night (on 13-of-17 from the field) was the shot of NOS the Magic needed to for the win. Knox, on the other hand, scored four points on 2-of-8 shooting in 23 forgettable minutes.

These road bumps wouldn’t be as glaring had Fizdale not tweaked a lineup that was working, in theory. I’m sure you’ve seen it to the point of exhaustion by now, but the starting lineup of Frank Ntilikina, Hardaway Jr., Damyean Dotson, Noah Vonleh, and Mitchell Robinson is pretty good, outscoring opponents by 8.1 points per 100 possessions. The numbers are a bit misleading; the lineup’s stellar defense (98.5 DRtg) deserves the lion’s share of the credit. Offensively, the lineup is prehistoric.

As much as old school fans love them some defense, if you’re going to survive today you need to score a lot of points. Vonleh and Robinson can be menaces on defense, but on offense they’re non-factors outside of the paint. As TKW’s  stat guru Jack Huntley broke down, the duo is outdated, attempting a league-low 1.2 three-point attempts per game.

The insertion of Knox is a necessary sacrifice made to modernize the offense. Fizdale did not mince words about the effect it has had.

David Fizdale today: "At 1st we were defending better and couldn’t score and had no pace. Now we’ve picked up our pace and our defense has dropped. That’s pretty typical of young teams." #Knicks

Sunday in Orlando was bad, but it’s not the ugliest we will see. Matchups with Giannis are on the horizon. Knox will have to run into Durant and face LeBron. Night’s like those might make you want you to consider mixing some bleach with your drink of choice, but experience is the greatest teacher.

Every rep Knox accrues will help improve his motor, one of the glaring weaknesses in his game. There are times—most notably when he lit up Summer League—where Knox is all over your screen. When he’s sprinting in the open court, euro-stepping and letting it fly without thinking twice, he is in his bag. You see a noticeable hop in his step.

As of right now, Knox is a top-10 candidate to win the 2019 NBA Rookie of the Year award. He’s put up decent stats since returning from an ankle injury but he had a rough start. Plus, his competitors for the title include Luka Doncic, Trae Young, and Deandre Ayton. It’s going to be hard to get into the top five unless he starts playing more consistently. If his odds to change, this ROY odds tracker will get updated to reflect any changes throughout the rest of the season. It also shows how he compares to some of the other top contenders which can be handy if you want to see who his biggest competitors are.

That energy offensively translates to the other side of the court. When he’s feeling it you see him attack the glass, rip down a board, and push the tempo. At Kentucky, he flashed these fleeting moments of aggression, but they were just that, fleeting.

“A lot of people told me that coming out of college but that’s not something that’s going to fix overnight,” Knox told reporters when asked about sustaining his energy. “I have to get in shape, get conditioning, compete everyday in practice. I think most of it is just competing offensively and defensively. But there’s games when my motor is good, I just got to get it consistent and play at a high level.” (via Chris Iseman/NorthJersey.com)

The problem here is consistency. Fizdale is tasked with finding the optimal situations for Knox without sinking the team in the process; remember the team is definitely not tanking. The best possible solution to Fizdale’s predicament is keeping Knox at the 4.

With Knox on the floor the defense takes a noticeable hit, as mentioned earlier, but the solution improving the defense could be a better offense. The Hawks and Kings are near the top of the league in pace. The Hawks in particular are in a similar situation to the Knicks. They too cannot defend a traffic cone right now, but sport a slightly better DRtg than the Knicks (110.6 to 112.2). Their success can be credited to their league-high pace of 106.8, per NBA Stats.

The Kings are a little further ahead in the rebuild process but follow the same formula. Despite a defensively challenged roster, they manage to get by on their offense, which is second in the league in pace. This is a formula Fizdale has started to dip his toe into. He slid Knox up to the 4 against the Pelicans and the team jumped out to 32-18 start.

Fizdale should continue to tap into a similar lineup with one minor tweak. One lineup he hasn’t experimented with is Frank, Dotson, Timmy, Knox, and Mitch. With that group, Fizdale can mask any of Knox’s defensive deficiencies by insulating him with his two best defenders. Frank and Dotson have proven worthy enough to handle the toughest assignments. Mitchell Robinson continues to be all over the place, but has established himself to be a beast on the glass in addition to a human fly swatter.

When Knox has started, he hasn’t shared the court with those guys. He has been grouped with Emmanuel Mudiay and Hardaway Jr.—guys not known for their defensive prowess, thus amplifying Knox’s shortcomings. Dotson and/or Ntilikina being on the floor frees up Fizdale to hide those shortcomings by matching Knox up with the opposing team’s least imposing threat.

For instance, Knox guarded Jerian Grant versus OKC instead of Paul George. Maybe that game goes a different way with Dotson harassing PG instead of George overmatching Hardaway. The main thing Knox would have to focus on is crashing the boards.

The sample size is small, but the Knicks pull down rebounds at a similar clip whether Knox is there or not. His body is not there yet to bang with bigger guys full time and his overall rebounding (2.7 rebounds per game) has plenty of room for improvement. One thing Knox can already do is push the pace when he does secure a rebound. This creates more opportunities for transition baskets versus grinding out possessions in the half court, which has been the a majority of the offense up to this point in the season.

This is why from offensive standpoint it is a no-brainer to ride with Knox; he adds a playmaking dimension neither Noah Vonleh nor Enes Kanter can match.

The Knicks are dead last in assists per game (18.9) while leading the league in unassisted two-point field goals (62.8 percent of makes). Those stats mirror the offense we see when there are only three ball handlers, a lot of dribbling resulting in mid-range pull-ups or post-ups.

Conversely, when there are four playmakers on the floor, fluid sequences like this are possible.

Tuesday night against the Blazers, we saw Vonleh attempt to replicate the same action Knox could bring by stretching the floor. Vonleh did happen to hit two of his five three-point attempts, but you could tell the Blazers were content with letting him fire away. (Vonleh would hit a pair of three-balls in the win versus Boston.) Knox would at the very least attract a close-out.

Development has become the newest buzzword for this team. It was a main reason New York’s second-round pick Mitchell Robinson was thrusted into the starting lineup much earlier than expected. That mentality shouldn’t change because the fan base grows antsy with all the losses. Fizdale must remain true to the vision that landed him the job in first place.

Knox personifies a modern day 4 and pushes the position-less movement we all clamored for this summer. There will be extremely rough stretches while he and the other Fiz Kids take their lumps, but that’s part of the process we all signed up for. Rome was not built in a day, as the old saying goes, and neither will this Knicks team. Develop the young guys and trust the process.