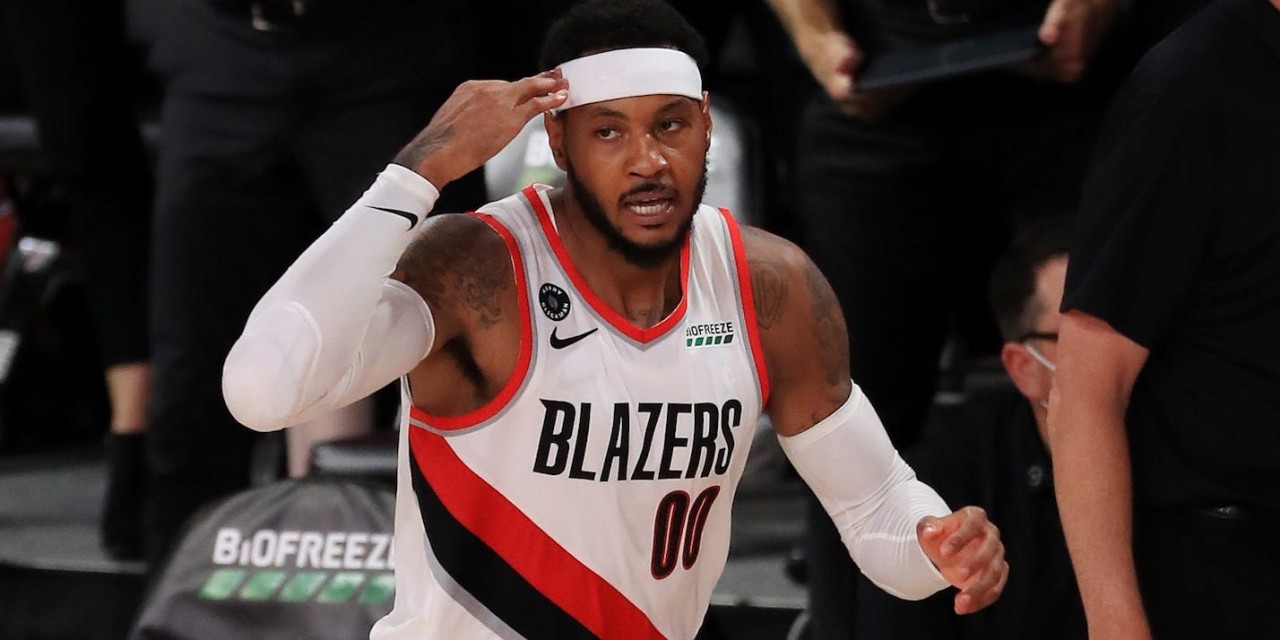 The Knicks did not get a bubble invite, but former players of the New York franchise are in the NBA playoffs, representing them in a way.

Although the New York Knicks didn’t qualify for the NBA’s restart, and therefore the chance to snag a postseason berth, the franchise will still be represented all throughout the playoffs. Several former Knicks have found their way onto the league’s best teams. Five of the last six champions had a former Knick on their rosters, and 13 of the 16 playoff teams are capable of adding to that total.

As the saying goes: Once a Knick, Always a Knick. So, here is every former Knick on a playoff team.

Lopez signed a four-year contract with New York in the 2015 offseason. The seven-footer started all 82 games in the 2015–16 season, averaging 10.3 points and 7.3 rebounds on 53.9% from the floor. He was traded to the Chicago Bulls in the offseason for a package centered around Derrick Rose.

The other two only spent two games each with New York. Matthews, who arrived in New York during the 2018–19 season via trade from the Dallas Mavericks, appeared in two games before his contract was bought out. Antetokounmpo was drafted 51st overall in the 2014 draft with a pick New York got from the Mavericks. He was waived before ever appearing in a game in the 2014–15 season but signed a 10-day contract during the 2015–16 season, where he played a total of six minutes.

Enes Kanter is the lone former Knick that is currently a Celtic. The Turkish big man arrived in New York in the summer of 2017 as a part of the package the Knicks received in exchange for Carmelo Anthony. He averaged 14.0 points and 10.8 rebounds in his 115 games as a ‘Bocker.

Kanter’s legacy in New York is more about what he said than how he played, even though he has the highest PER in franchise history. At media day for the 2018–19 season, Kanter provided too much information when he described what happens to him when he thinks about the playoffs. He complained throughout the season about being benched and his diminished role with New York, who released him in February after failing to find a suitable trade partner.

Holiday came to New York form the Bulls along with Rose. The 6-foot-6 wing was the only player to play all 82 games of the cursed 2016–17 season, averaging 7.7 points in 20.0 minutes per game. McDermott also found his way to the Garden via trade; the Knicks welcomed him as they traded away ‘Melo in the following offseason. The former Creighton star averaged 7.2 points and was traded at the 2018 trade deadline for Emmanuel Mudiay.

Like their first-round opponent, Philadelphia’s only former Knick is a big man: Kyle O’Quinn. The 6-foot-9 native of Queens joined the Knicks ahead of the 2015–16 campaign and spent three seasons as a productive bench player. In just 15.3 minutes per game over those three years, he averaged 6.1 points, 5.2 rebounds, 1.6 assists and 1.1 blocks.

The Nets took the Knicks’ free agents last summer and then signed a few former ‘Bockers just for good measure.

Brooklyn began the season with free agent acquisitions DeAndre Jordan and Wilson Chandler. Jordan only spent 19 games with New York in the end of last season, averaging 10.9 points and 11.4 rebounds. Chandler was drafted 23rd overall by the Knicks in 2007, averaging 14.0 points and 5.3 rebounds in over three seasons.

As more and more Nets opted out of the NBA’s Walt Disney World bubble, the team signed several former Knicks—Jamal Crawford, Lance Thomas, and Michael Beasley—to play in their place. Crawford spent five seasons with New York, averaging 17.6 points and and 4.4 assists. He averaged his career-high of 20.6 points as a Knick in the 2007-08 season. Thomas also spent five seasons in New York, averaging 6.0 points and 2.6 rebounds. Beasley, who averaged 13.2 in his lone season in New York, contracted the coronavirus in July and subsequently didn’t attend the bubble.

The first-seeded Lakers acquired their only former Knick, shooting guard J.R. Smith, shortly before the league’s restart. Smith spent over three seasons with New York, putting up 15.1 points, 4.3 rebounds, and 2.8 assists per game and winning the 2012–13 Sixth Man of the Year Award. He ranks eighth in three-point field goals in franchise history and holds the record for most three-pointers in a game when he splashed 10 on the Miami Heat in 2014.

The other Los Angeles team has two former Knicks in Marcus Morris and Joakim Noah.

Morris is the most recent playoff participant to become a former Knick, as New York traded him to the Clippers in February. The 6-foot-8 forward led the Knicks in scoring (19.6 points per game) and three-point percentage (43.9% from downtown). Noah signed a four-year deal in the summer of 2016 but only appeared in 53 games with New York over two seasons, averaging 4.6 points and 7.9 boards. He was waived and his contract was stretched out over three years, which ends after the 2021–22 season.

Noah Vonleh is the lone former Knick on the third-seeded Nuggets’ roster. New York took a flyer on Vonleh for the 2018–19 season and the 6-foot-10 big man had his best season yet, averaging career-highs with 8.4 points and 7.8 rebounds in 25.3 minutes per game.

Tyson Chandler is both the only former Knick and the only player over 6-foot-10 on Houston’s roster. The seven-foot-tall Chandler only spent three seasons in New York, but they were among the best of his career. He was the Defensive Player of the Year and league leader in field goal percentage in the 2011–12 season, and a first-time All-Star the following year. His field goal percentage of 63.8% is the highest mark in team history.

Danilo Gallinari is the only player to don the orange and blue for the Knicks before repping the same colors for this Thunder team. New York drafted the Italian sharpshooter sixth overall in the 2008 draft. In three seasons, Gallo averaged 13.7 points and 4.3 rebounds while shooting 37.7% from beyond the arc. He was a part of the trade packaged that helped the Knicks land Carmelo at the 2011 trade deadline.

The lone former ‘Bocker that now calls Utah home is Emmanuel Mudiay. The 6-foot-3 point guard spent two seasons in the Garden, averaging 13.2 points and 3.9 assists. His head coach at the time, David Fizdale, vowed to “get him right”, which resulted in the league’s least effective offense.

All four of Dallas’ former Knicks were acquired in a single trade. At the 2019 trade deadline, the Knicks sent Kristaps Porzingis, Tim Hardaway Jr., Trey Burke (later released and re-signed by Dallas), and Courtney Lee to the Mavericks in exchange for a pile of assets whose value has collectively depleted as time ticks on.

Porzingis was the last Knick to be named an All-Star, averaging 22.7 points, 6.6 rebounds, and 2.4 blocks in the 2017–18 season. The Latvian power forward averaged 17.8 points and 7.1 rebounds over his three seasons with New York, and ranks third in blocks per game and sixth in total blocks in the team’s history. He was named to the All-Bubble Second Team, averaging 30.5 points and 9.5 rebounds in six seeding games.

Hardaway Jr. spent four seasons with the Knicks across two stints, being drafted 24th overall in 2013, traded away, signed as a restricted free agent, and traded again. In 254 games as a Knick, the 6-foot-5 shooting guard averaged 13.8 points on 40.7% form the field. Burke was signed by New York out of the G League and appeared in 69 games for the Knicks over two seasons, averaging 12.3 points and 3.8 assists. Lee signed with the Knicks as a free agent in the summer of 2016 and put up 10.9 points and 3.1 assists per game in his three seasons as a Knick.

‘Melo was the face of New York for seven years, leading the Knicks to three playoff appearances and earning the 2012–13 scoring title and a bid to the All-Star Game in every season he spent at the Garden. In franchise history, he ranks third in points per game, third in three-pointers, and seventh in total points.

Hezonja only spent one year in New York but made the most of it, dunking on Giannis Antetokounmpo and blocking a game-winning shot attempt from LeBron James. Ariza was drafted 43rd overall in the 2004 draft by the Knicks and spent just two seasons in New York, averaging 5.5 points in 18.0 minutes per game.

»READ: The Knicks should be interested in reuniting with stretch four Danilo Gallinari