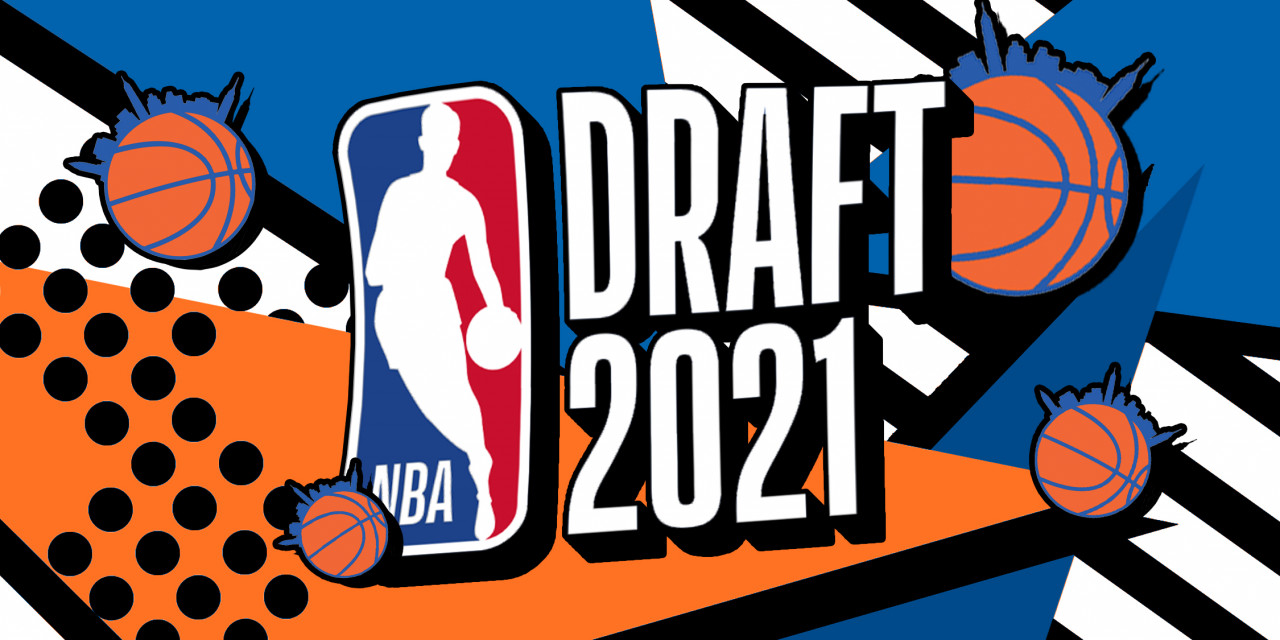 With two picks in each round in the 2021 NBA Draft, there are countless possibilities for the Knicks to add young talent to the roster. Here are four versions played out with different draft scenarios.

Usually, the NBA Draft is a clear-cut process for the New York Knicks. Thanks to the high draft positioning they’re (usually) famous for having, there’s a pretty good idea as to who they’ll end up selecting. With picks as high as three and four, and even picks eight or nine, there is always a good idea as to who the players available for them will be.

The 2021 NBA Draft bucks the trend. The highest pick the Knicks have at the moment is no. 19, with the 21st, 32nd, and 58th overall picks in their possession as well. Last year’s draft showed first-timer Leon Rose’s affinity for wheeling and dealing, which could make his second draft night as a president of basketball operations an unpredictable one.

Four TKW writers have teamed up to offer a brief glimpse into how many different directions the Knicks could take. Each writer has a different collection of picks to draft players with. They’ll be working with different draft simulations since no one knows what the draft will look like until it’s happening live.

Here are four visions of an ideal 2021 draft class for the Knicks. Each image was made with Fanspo’s mock draft simulator.

In our first simulation, the Knicks don’t make any moves and use all four of their picks. 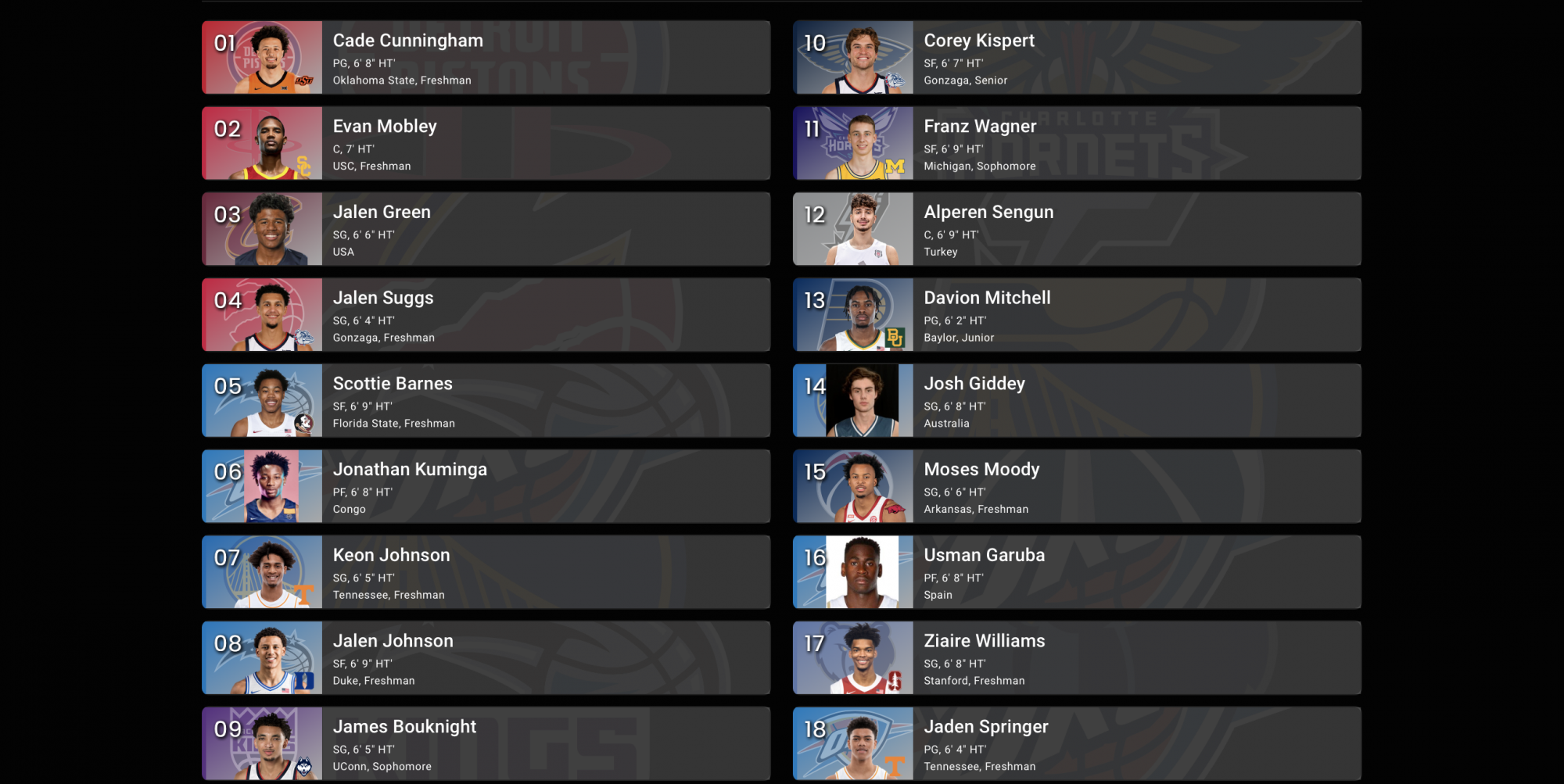 19. Sharife Cooper, guard, Auburn: I was about to put Tre Mann here until I noticed a certain point guard was still on the board. If he gets to 19, Cooper makes too much sense for the Knicks. He’s a smart point guard; one of the best passers in the class, with the ability to provide rim pressure. While he might not start day one, Cooper is a worthwhile investment and could be the most talented lead guard the Knicks have rostered in at least 20 years.

21. Trey Murphy III, wing, Virginia: Outside of R.J. Barrett, the Knicks lack true depth on the wing. Trey Murphy III would fix that. At 6-foot-9, Murphy has the size needed to handle some of the larger wings in today’s game. What makes him an enticing pick for New York is his ability to defend on the perimeter and space the floor. Not a creator at the moment, Murphy can get on the floor and play “Thibs Ball” while figuring out the other intricacies of his game.

32. BJ Boston, wing, Kentucky: Boston has the size and skill to be an effective player in time; that’s enough to allow the Knicks to get him at the top of the second round. New York doesn’t need to play him right now. In a perfect world, the Knicks can stick him in Westchester for the majority of the season and reassess in a year.

58. Yves Pons, forward, Tennessee: This is a shot in the dark; usually players selected in the 50s are destined for adventures overseas. Pons is a talented defender, capable of defending anywhere from point guard to center. The issue, however, is that his offensive game is nearly nonexistent outside of 10 feet. Take his rights, stash him overseas, and hope he learns to hit a three with consistency.

This time, the Knicks package picks 19, 21, and 58 to get the 13th overall selection from the Pacers. They still have pick 32 at their disposal.

New York is in desperate need of offensive firepower from the frontcourt. Too often last season, the Knicks looked lifeless on offense and didn’t really have a true floor general who could manage the game as well as be a bona fide threat to score. We all are aware of Elfrid Payton’s struggles and how good Derrick Rose was, but he is way past his prime and is better served as a backup due to all the wear and tear his body has endured. Yes, I know Luca Vildoza will be here next season, but I don’t envision him being a starting-caliber point guard. Maybe he proves me wrong.

Enter Davion Mitchell, who put himself on the map last season by helping the Baylor Bears win the NCAA title. The 6-foot-2 point guard is explosive, quick, and can get to the cup with conviction, making him a great finisher. Mitchell also knocked down 44.7% of his three-point shots last season and is an absolute pest on the defensive end of the floor. Essentially, Mitchell would be the whole package for the Knicks at 13: A polished, experienced two-way player who is ready to contribute right away. Sure, Mitchell is a bit small and there are still questions about him being able to sustain his marksman-like play from behind the arc. But in my opinion, this is the answer at point guard going forward for the Knicks.

At 32, a pick with excellent upside would be Josh Christopher. The Arizona State guard is an athletic marvel who didn’t get much shine in his one season as a Sun Devil due to their disappointing season. He is a very energetic and bouncy guard who has the capability to score from all three levels. However, he is somewhat of a project and definitely needs to polish his game in order to be a more diverse scorer, but the potential is certainly there. Defensively, I believe he can contribute right away due to his love of the game as well as his 6-foot-9 wingspan. JayGup could potentially develop into a reliable sixth man or even a back-end starter if he can improve his offensive consistency and decision making. If Christopher is there at 32, he is worth the selection.

For the third scenario, the Knicks tap into Oklahoma City’s obsession with draft picks to move up a few spots. New York receives pick no. 16 in exchange for nos. 19 and 32. They hang onto the 21st and 58th selections. 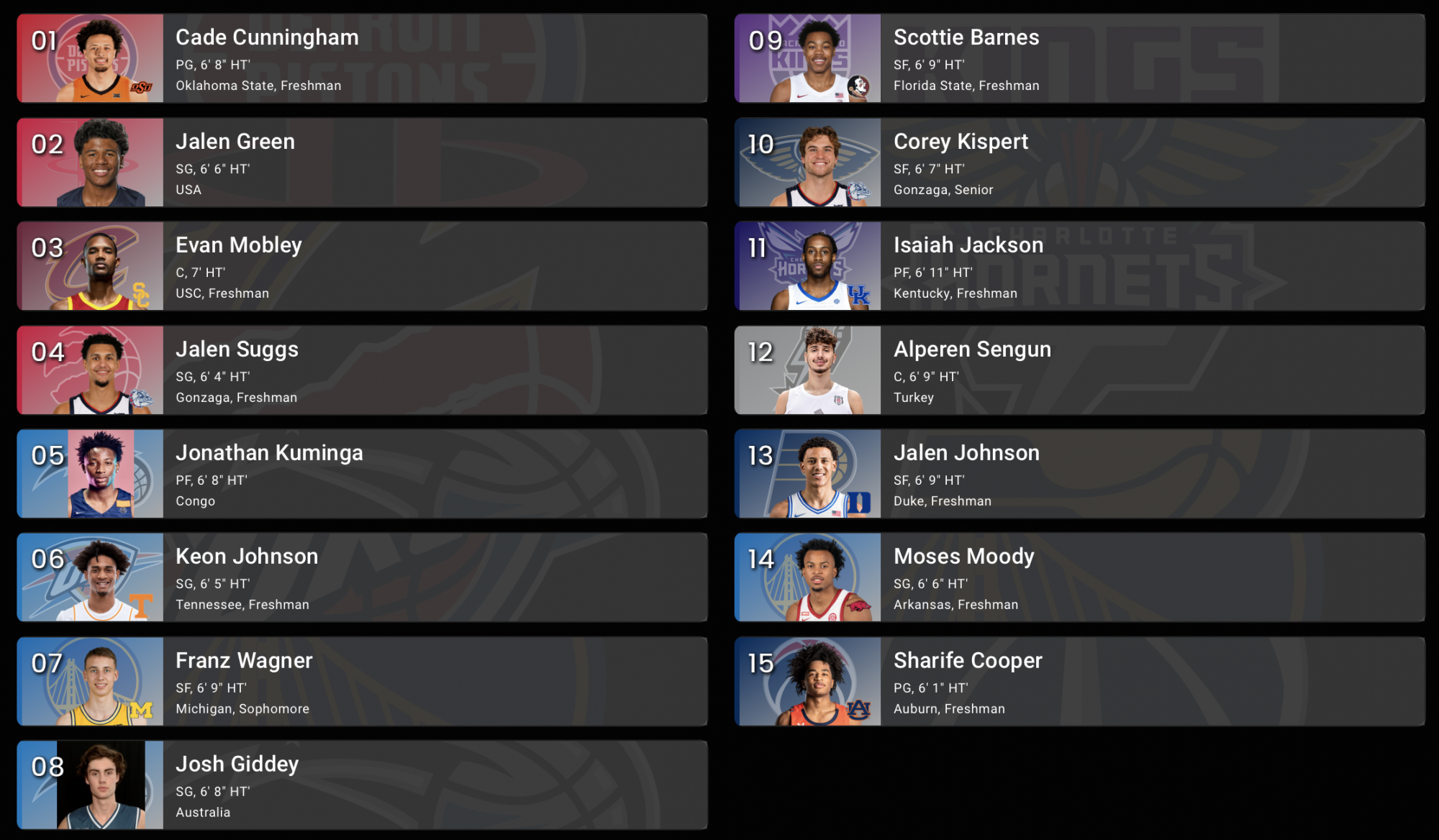 Cooper is perhaps the perfect fit for the Knicks out of all the mid-to-late-first-round prospects. Just missing him right here stings, but being able to select James Bouknight curbs those sad feelings. Bouknight, a 6-foot-4 guard from UConn, has the tools to be a scoring machine, primarily slick handles and explosive finishing near the hoop. The Brooklyn native has a nose for the basket and much more potential to tap into if he improves his deep-range shooting and decision making.

With pick 21, I think the Knicks would be wise to still look for a true point guard. One of Jared Butler or Jaden Springer would suffice but I would prefer Springer due to his age (he’s not yet 19) and defensive talents. His physical playstyle would make him a perfect Thibs Guy at the point of attack defensively. He also shot 43.5% from deep in college, albeit on just 2.6 attempts per game. Springer is the rare ultra-youngster who could be impactful right away because of his defense, though he’ll definitely need time to marinate the rest of his game.

At pick 58, it’s damn near impossible to tell who will be available. If New York keeps this pick, whoever they use it on will likely be a draft-and-stash option, whether that be stashed overseas or in the G League. I wouldn’t mind the Knicks rolling the dice on Sandro Mamukelashvili. The Seton Hall product has the mobility and passing abilities to run pick-and-rolls as a ball-handler and the size to run them as a big. He also showed some shooting ability, converting 33.6% of his triples and 71.4% of his free throws last season, each of which came on over four attempts per game.

To wrap things up, the Knicks have traded up to the eighth pick. They receive the pick while taking Gary Harris’ one-year, $20 million contract off the Magic’s hands. New York sent picks 19, 32, and 58 to Orlando while retaining the no. 21.

After trading up for the eighth pick and the expiring contract of Gary Harris, an overpaid but not useless player who could shore up the bench defense or be used as cap matcher in a future trade, the Knicks are in a fun position to choose between three players: Scottie Barnes, Franz Wagner, and Moses Moody.

Each prospect holds undeniable appeal. Barnes is likely the highest-ceiling swing of the three, as he has genuine point-forward potential while being a future All-Defensive guy, should things pan out. But the jump shot, and halfcourt scoring in general, represents a question mark as big as any in the class, and with Julius Randle, Obi Toppin, and Mitchell Robinson, Barnes might not get the opportunity he needs to shine. Don’t get me wrong—fit shouldn’t determine a selection this high. But fit combined with the aforementioned concerns make him a tough sell for the Knicks.

Wagner is a great defender, reading the floor incredibly well to provide high-level impact defense across multiple positions. He isn’t an incredible shooter, but he’s solid, and he makes up for it with a devastating combination of playmaking and driving. He makes quick decisions and generally plays inside himself/the team while not taking away anything on the floor. With R.J. Barrett and Randle, Wagner could form a potent and versatile two-way forward tandem.

But ultimately, Moses Moody gets the nod.

Moody is maybe my favorite player in this class. He’s the quintessential 3-and-D prospect with more upside than he gets credit for, given his age, sky-high free-throw rate, and room for improvement, both from a mechanical/mindset standpoint, as a shooter. Despite having slow feet and a general lack of burst, he’s strong as hell and a great, instinctual defender, with hands that routinely rip the ball from drivers.

The 6-foot-6 Arkansas product could use a little more “eff it” in his game, as he is constantly focused on making the right play, almost to a fault. With a bit less self-consciousness and a bit more loco in his coco, Moody could be the perfect high-level complementary player. Now, if that seems lower than you should be shooting for at eight, just remember the Knicks’ track record in that range this decade.

At 21, the Knicks are taking Sharife Cooper. If Moody carries the safety of being a guaranteed long-time NBA contributor, Cooper represents the home run swing. One of the two or three best passers in the class, Cooper can also get into the paint whenever he wants—though what he does there is sometimes an adventure. With Moody, Barrett, Harris, Randle, and Robinson all around to insulate him, his defense doesn’t worry me. The big question, of course, is the shot. He shot poorly in his 12 games at Auburn, but a sample size that small shouldn’t be viewed as a death sentence. He shot much better at AAU and seems to have gotten rid of a bit of the dramatic lean-back he displayed in college. Simply put, Cooper is a home run swing well worth taking.

»READ: Shooting for a playmaking wing: looking at creators in the NBA Draft

»READ: Could Oregon’s Chris Duarte be the most NBA-ready prospect?