Four Visions of an Ideal Draft Night Outcome for the Knicks 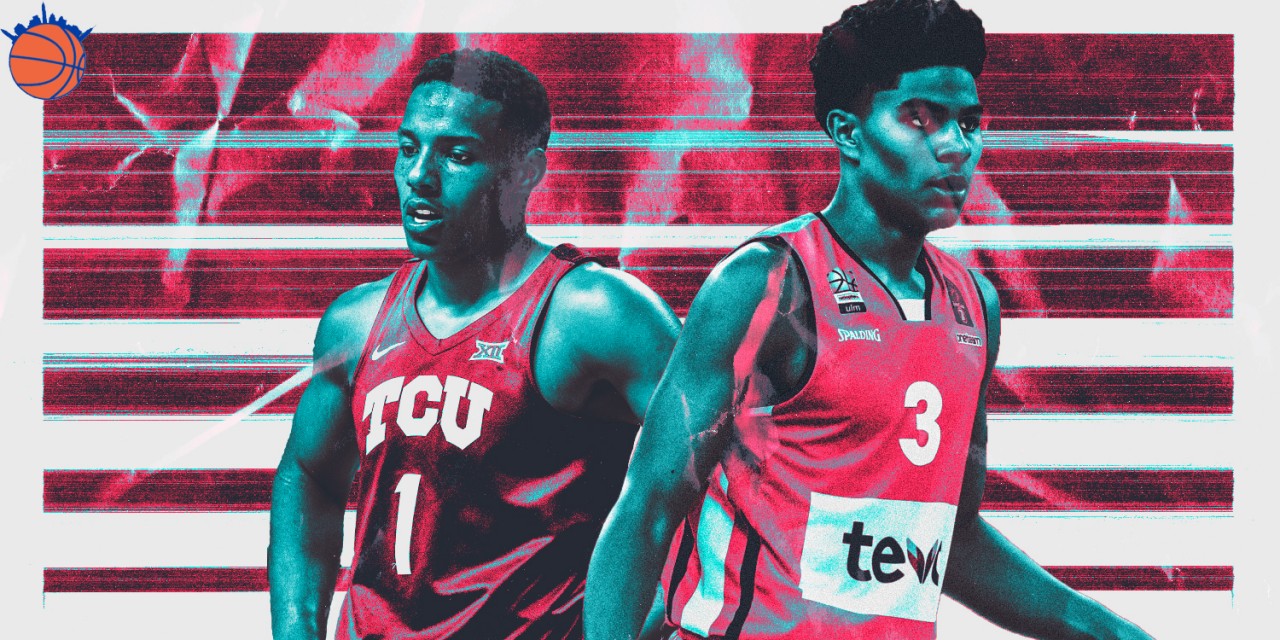 Who should the Knicks keep their eye on during the 2020 NBA Draft? We present four versions of draft night given the varied lottery outcomes.

Part of the misfortune of postponing the 2020 NBA Draft is the rescheduled date of the lottery, too. The New York Knicks, among 13 other teams, won’t know where their top pick falls—anywhere from 1-4 and 6-10—until August 25th. This further suspends any active measures the Knicks can plan, scout, and evaluate in the draft (and the franchise’s future following a new management restructuring).

That being said, The Knicks Wall took matters into our own hands. Four staff writers were given a simulated lottery and pitched their ideal outcome at the 2020 draft (given realistic choices at New York’s three selections).

The Knicks stay put in the lottery results

At the sixth pick, it’s tough to say who will be available—especially before the lottery. Since this is a dream scenario, after all, I’m going to have visions of the Knicks drafting Killian Hayes dance in my head.

I don’t think the dynamic, lefty Frenchman being an option at sixth overall is unrealistic. LaMelo Ball and Anthony Edwards will likely go top three, with any combination of James Wiseman, Onyeka Okongwu, Deni Avdija, or Tyrese Haliburton rounding out the top five.

Hayes would be a great addition to New York. The 6-foot-5 point guard has displayed grown-up scoring abilities, flaunting smooth jumpers off the dribble, strong drives into the paint, off-the-dribble three-pointers and more. Adding to his bag of tricks are impressive playmaking chops and alert defensive instincts.

In order to be more effective in the NBA, Hayes will need to be more adept at drawing shooting fouls and become more comfortable using his off hand. Still, he’s got a good foundation on which to expand.

The Knicks haven’t developed a young point guard into a franchise cornerstone since…Clyde? Hayes has shown talent that could end that drought.

With the 27th pick, I would love for New York to select Desmond Bane. Most mock drafts have him going in the early second round, but I think the 6-foot-6 TCU product is worth taking earlier than that.

The 22-year-old Bane could become a productive 3-and-D wing at the pro level. He made 2.9 triples per game on 44.2% shooting from deep last season. With a three-point attempt rate of .477, Bane already knows how to let it fly.

NBA Prospect Play of the Day: TCU's Desmond Bane does a great job scoring/facilitating out of 'off ball screens'. Can sprint/fade into 3s, curl into jumpers/floaters or drop off to the big. High IQ, shoots it easy. Also comfortable playing PnR @ 6-6. Young senior at 21 years old. pic.twitter.com/lmscXghF7S

Bane showed great footwork coming off screens and he ran pick-and-rolls rather well, mixing slick passes to open teammates and good looking pull-up jump shots. He has some defensive promise, too. His motor is always running, his strength should allow him to be versatile, and his I.Q. allows him to contest shots and rotate effectively.

New York would be wise to spend the 38th pick on a big man that can shoot from deep. One that sticks out to me is Minnesota’s Daniel Oturu.

At 6-foot-10 with a 7-foot-2 wingspan, Oturu averaged 20.1 points with a combination of bruising post moves and a soft touch near the hoop. He has smooth shooting mechanics and converted at respectable rates, shooting 70.7% from the free throw line on 5.8 attempts per game and 36.5% from deep on 1.7 attempts per game.

Oturu is also a valuable defender. He was named to the Big Ten All-Defensive team, leading the conference in rebounds and blocks—both total and per game.

Overall, my dream scenario for picks six, 27, and 38 includes Hayes, Bane, and a stretch big. Should New York be able to take Bane with pick 38, they could satisfy my happiness by snatching Maryland’s Jalen Smith or Serbia’s Aleksej Pokusevski with pick 27.

The Knicks drop back two spots in the lottery.

Pick 8: With the elite point guard prospects off the table, I opted for the best two-way wing in the class. The 19-year-old sophomore out of Florida State Devin Vassell profiles as a high-level shooter with genuine upside as a shot creator, and is one of the best defenders in the draft. At 6’7″ with a wingspan somewhere around 6’10″, he can play small forward and eventually should be able to run in certain units as a small-ball four. He’s active in transition, a smart and effective cutter, and has a strong motor. In short: he’s the perfect fit on the wing next to R.J. Barrett and has potential to become a Khris Middleton–like do-it-all wing for the Knicks—exactly what every team needs.

Pick 27: I wanted to take Desmond Bane here, but with Vassell likely needing at least a few years, if not longer, before being able to man the four, and the unlikely proposition of the Knicks being willing to try out Barrett, power forward (which wouldn’t be the worst idea), I went with someone who could slot into the starting lineup sooner rather than later. Grant Riller is elite at getting to the basket and is a very impressive shot-creator on the perimeter, full of the herky-jerk movements that make guys like C.J. McCollum so tough to guard. Riller is old for a rookie (he’ll turn 24 in February of his rookie year), but for a young team in need of a steadying presence, that’s not necessarily a bad thing. He brings a skill set that the Knicks have been looking for from the guard position for years.

Pick 38: Injury concerns make Killian Tillie a huge risk, but if not for said concerns, Tillie would be a first-round lock. The 6’10″ senior from Gonzaga shot 40% or higher from three all four years in college while demonstrating an impressive feel for the game on both ends. If injuries should derail his career, this is a potentially wasted pick, but if he can stay healthy, the Knicks could have the perfect frontcourt partner for Mitchell Robinson for years to come. That’s a swing worth taking in the second round, especially with four picks in next year’s much deeper draft. Between these three picks, the Knicks will suddenly have turned their greatest weakness (perimeter shooting) into a bona fide strength.

The Knicks luck out and move into the top 3

My first thought was to trade up from three, give up a future first-round pick to Chicago, and secure LaMelo Ball. However, I decided to stay put and take French guard Killian Hayes at three.

The Knicks need a long-term option at point guard, and Hayes makes the most sense as an elite pick-and-roll general. There are minor concerns—Hayes doesn’t really attack the basket from the right all that much and shot just 29.4% from three—but the trio of Hayes, Barrett, and Mitchell Robinson is a strong three to build around.

Desmond Bane is a young senior wing who can space the floor (44.2% from three) and handle the ball (3.9 assists per game). Xavier Tillman is a multi-faceted forward who can do everything (3.4 assists and 3.3 stocks this past season at Michigan State) but shoot. While both lack the upside of Hayes, Bane, and Tillman could be plugged into the backend rotation right away and develop into valuable, two-way pieces for the next good Knicks team.

The Knicks fall by one spot in the lottery.

The Knicks are in desperate need of a point guard. With Frank Ntilikina essentially a bust and Dennis Smith Jr. seemingly not long for New York, Cole Anthony is the dream pick here. The 20-year-old brings three-level scoring and playmaking ability, similar to that of Russell Westbrook. Anthony is a New York native as well, so he understands the limelight and brings an on-court attitude that Knicks fans love and appreciate.

Anthony can definitely improve on his decision-making and shot selection, but his ability to penetrate will provide plenty of opportunities for spot up shooters on the perimeter, as well as dump offs to guys like Julius Randle and Mitchell Robinson. He is definitely a plus defensively on the perimeter, a department with which the Knicks have routinely struggled.

Desmond Bane is one of the most accomplished shooters in this draft, and one of the Knicks’ weaknesses in recent years has been their ability to knock down the three ball. Bane has good size (6’6”) and muscle mass for the shooting guard position and can be a nice complement on the wing to Barrett, who isn’t a natural shooter and hasn’t found his stroke quite yet.

Bane is also a smart and experienced player who spent four years in college and will likely be ready to contribute immediately. The Knicks should relish at the opportunity to be able to secure a bona fide 3-and-D type guy like Bane in the late first round.

Like Bane, Jordan Nwora is a proven college player. The former Louisville Cardinal can be a nice wing off of the bench whose greatest strength is shooting the rock. At this point, the Knicks need to accumulate quality young players who can shoot and make intelligent decisions with the ball and Nwora is one of those guys.

Shooting and perimeter defense are two of the Knicks’ biggest needs, and addressing them with their final two picks would be ideal. Nwora can also help with the spacing issue that plagued the Knicks last season as well.

In my dream draft, the Knicks go with shooting and playmaking over size. I believe the Knicks are more than okay with Robinson and Randle manning the frontcourt. I also firmly believe Kenny Wooten will be a factor next season down low as well, giving the Knicks a nice backup for Mitch.

In this draft, the Knicks address the point guard position and can finally move off of Frank/DSJ and let Cole Anthony run the show from day one. Bane and Nwora can help solve the shooting issue and would likely be contributors from day one, given their ample college experience.

Unless the Knicks can get a massive haul for any of their picks, I believe standing pat and adding three quality players to the roster is the way to go.