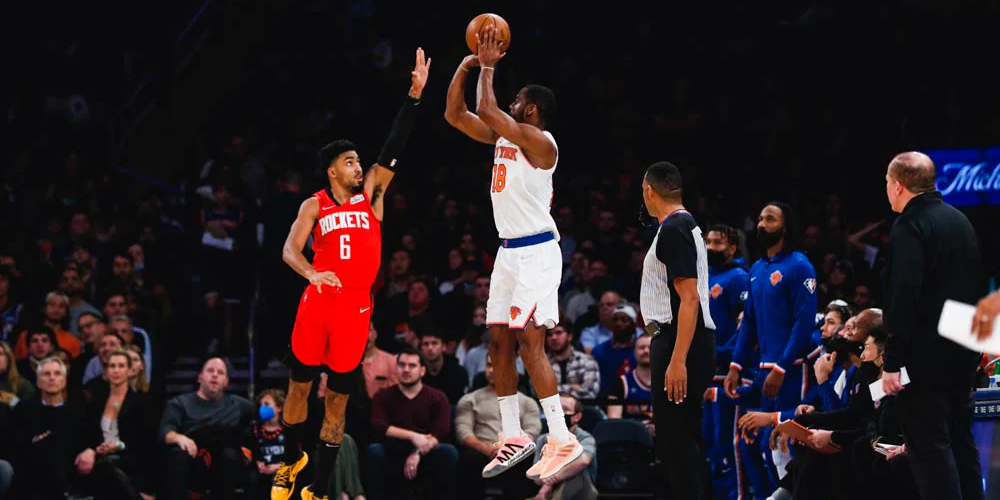 A listless Knicks team was rejuvenated in the fourth quarter by Alec Burks to take down the awful Rockets at The Garden.

An ugly win is still a win. After trailing by as much as 10 in the second quarter to the team with the NBA’s worst record, the New York Knicks (9-7) rallied in the fourth to come out on top against the Houston Rockets (1-15), 106-99.

Alec Burks keyed the comeback with 20 points off the bench and 16 in the final frame. Evan Fournier was the second-leading scorer for the Knicks with 19, while Quickley chipped in 13 and Randle 16. As for the opposition, Christian Wood was the standout performer for Houston with an 18-point, 12-rebound double-double.

IN
MY
BAG
BURKS pic.twitter.com/tbx0iCjwKe

The three-point shot came to the Knicks’ rescue late in the game. After a slow start from beyond the arc, New York finished 18-for-41 from distance, equating to a 43.9% clip.

Here are the takeaways from tonight’s action.

Both teams got off to a miserable start

The opening quarter was an unaesthetic rock fight between two teams that couldn’t do much of anything right. It was among the ugliest quarters of NBA basketball all season. Houston—who turns the ball over more than any team at 18.8 per game—committed an eye-popping eight blunders in the quarter and six across the first four minutes. New York, meanwhile, saw their openers struggle once again—their top-performing starter after one was Julius Randle with five points on 2-for-7 shooting.

At the end of a period that seemingly couldn’t finish soon enough, the Knicks were losing to Houston, 21-13. The Rockets shot just 7-for-22 as a team and yet were up by eight points. How does this possibly happen? Well, New York settled for jumpers all quarter long and got man-handled on the glass to the tune of 21-8. The energy from this team has been lackluster lately, but their first-quarter effort was another level of awful. Slow starts have plagued the Knicks all season. Tom Thibodeau must figure out how to address this, whether that’s by better preparing the current starters or tweaking the lineup. New York has too much talent to begin games so sluggishly.

Evan Fournier rids himself of rust

It has been a rough last few weeks for the Knicks’ starting shooting guard. Fournier’s highest point total in November before tonight was just 15, and he was benched for the previous four fourth quarters heading into this one. The Frenchman has been much-maligned by Knicks faithful recently, and rightfully so—he wasn’t making up for his shooting woes by contributing in other facets. But Fournier may have turned a corner against the Rockets.

Fournier was arguably New York’s best offensive player tonight. He tallied 19 points in 30 minutes, though his efficiency was even more encouraging than the point total. Fournier went 7-for-12 from the floor, including 5-for-9 on threes; he hasn’t made more than three triples in a game since October 30th. He didn’t put together a perfect game as he was responsible for a few defensive miscues, but that comes with the territory of playing Fournier. Defensive mishaps aside, if Fournier is shooting the ball and spacing the court like he did tonight, the Knicks are a better team with him on the floor.

The Knicks are back on the hardwood tomorrow in Chicago to rematch with the Bulls, a formidable opponent they barely sneaked by back in October.