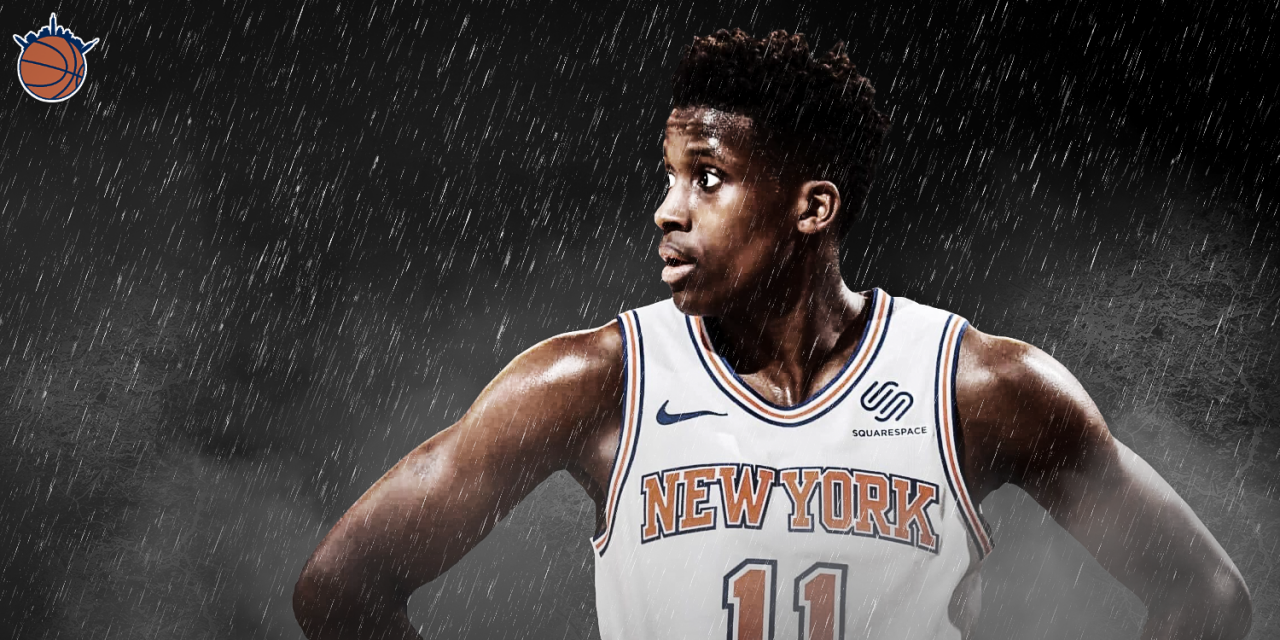 After leaving Friday’s Lakers game wearing a walking boot, Frank Ntilikina has another obstacle facing him amidst his poor second season in New York.

The 2018–19 season hasn’t been an easy one for Frank Ntilikina. The 20-year-old French point guard has dealt with a crowded backcourt, trade rumors, offensive struggles, and extended stints on the bench during his sophomore season. Yet, Ntilikina has also had stretches where he’s shown the sort of two-way potential that led the Knicks—then led by Phil Jackson—to take him with the eighth pick in the 2017 draft.

The franchise has been criticized for passing on Dennis Smith Jr. and Donovan Mitchell, who were drafted one and four picks after Ntilikina, respectively. What’s done is done, and just by virtue of taking him in the first round, the Knicks have a lot invested in Ntilikina’s development; perhaps more than any other player on the roster besides Kevin Knox or Kristaps Porzingis. Frank becoming a positive contributor on the offensive end will be a major factor in how far this young core can take the Knicks.

At 6’6” with a 7’1” wingspan, Ntilikina has the body to be an elite defender—in fact, last season he was one of the best players in the league at guarding the pick-and-roll. Offensively there have been flashes, but for the majority of his short career, Ntilikina has been reluctant to attack defenses and an inconsistent scorer when he would do so.

There have been games earlier in the season, against the Golden State Warriors and Charlotte Hornets, when he looked great. He scored and 17 and 18 points, respectively, and was efficient from the floor and from three in both. His three-point shot has been erratic so far, but his form is good, and although he doesn’t get there often, he’s shooting over 80 percent from the free throw line—typically a good indicator of a player’s overall shooting ability. And his long arms allow him to utilize a variety of sweeping layups, as well as yam on Rudy Gobert.

Spin cycle and a scoop finish by Frank Ntilikina ? pic.twitter.com/y2Y6FiULhv

The challenge for not only Ntilikina, but also head coach David Fizdale and the entire Knicks organization, is to start stringing these flashes into some consistent play.

Putting Frank in the right position to succeed is paramount. Before Fizdale’s benching of Ntilikina for three games at the start of December, Frank posted back-to-back games with no points on eight total attempts. During this time he was relegated to standing in the corner as Emmanuel Mudiay, Allonzo Trier and Trey Burke held the ball for the majority of possessions.

Allowing Frank the opportunity to bring the ball up, survey the court, and run the offense might be the best way to get him to attack. Handing the keys over and saying nothing will happen on offense without you shows that they have faith in him, ideally giving him the confidence to start stringing positive games together.

This is why the ankle injury he suffered against the Lakers last Friday could not have come at a less opportune time. Ntilikina was called for a foul while defending a drive by Josh Hart, and after attempting to stay on the floor, Ntilikina turned the ball over at the other end before going back to the locker room during the ensuing timeout. He didn’t return, playing 56 seconds.

The Knicks called it an ankle strain and listed him as day-to-day. It’s possible he returns before the team’s west coast trip ends on Tuesday against Golden State—although Marc Berman is reporting he may miss the two final games—but after coming off a solid 10-point, five-assist showing against the West-leading Denver Nuggets, the last thing Ntilikina needs is to sit on the bench and lose any momentum he may have been building.

Especially right now, while the rest of the Knicks guards are struggling. Mudiay, the starter, is averaging 16 points per game on 36 percent shooting from the field since Christmas. Trier, the 22-year-old undrafted rookie, hasn’t scored more than eight points in a game since returning from a hamstring injury—making only 10 of his last 38 attempts. Burke has been good when given minutes. The 26-year-old will be a free agent at season’s end, so Burke’s been the odd man out, receiving four DNPs since returning from a knee strain.

If Ntilikina could put together a few good games while the rest of the team’s stable of guards was struggling, it’s possible that he could wrestle the starting job away from Mudiay. Ntilikina is under team control until the end of the 2021–22 season; Mudiay will be a free agent at season’s end, unless the Knicks extend his $5.76 million qualifying offer. Mudiay’s been terrific for much of this season, but extending that offer essentially forces the team to either extend him or sign him as a restricted free agent the next year—limiting their options.

Ntilikina’s improvement isn’t a given, but if given the opportunity, there are things he can do to put himself in position to succeed on offense. Start by focusing on what he does best, defense.

There have been more than a few times this season when Ntilikina has been the victim of a bad foul call this season. Clyde and Breen were trying to see where he hit Hart as Ntilikina was flexing his ankle under the basket. It’s hard to be aggressive on that end of the floor when you’re not getting the benefit of the doubt, but good things happen on offense when Ntilikina is mucking it up for the opposing team. If he can make a few plays on defense, then suddenly he may be more willing to drive to the rim or pull the trigger on that three when he has space.

Since his sabbatical on the sideline earlier this season, Ntilikina has had the ball in his hands more often. According to NBA Stats, his usage rate increased from 14.9 to 19.1 percent after his benching. Trier and Burke’s absences certainly play a factor in this, but it’s good to see regardless. Hopefully, he remains active on offense after their return.

Ntilikina won’t improve by standing in the corner and spreading the floor. He needs to play like the point guard the team drafted him to be. It needs to be his team when he’s out there. There isn’t much to do besides putting him in a position to succeed, urging him to be aggressive, and hoping that the shots start falling. It’s why this year has been frustrating.

Knox seemed to turn a corner in this, his rookie season when he decided to focus on getting to the rim. According to NBA Stats, Frank is taking more threes and fewer mid-range shots this season than he did last year. There isn’t any glaring inefficiency in his shot selection; the ball’s just not going through the hoop. He’s shooting 34.9 percent from the field.

The only thing left is to keep playing through the growing pains. There will be plenty, but Ntilikina is still the 19th-youngest player in the league, and with the Knicks at 10-29, no one has any more delusions of contention. This season is about Zion Williamson and developing the Knicks’ young talent, and despite his potential, Ntilikina really does need it.