Would Frank Ntilikina See His Confidence Boosted From a Tom Thibodeau Hire? 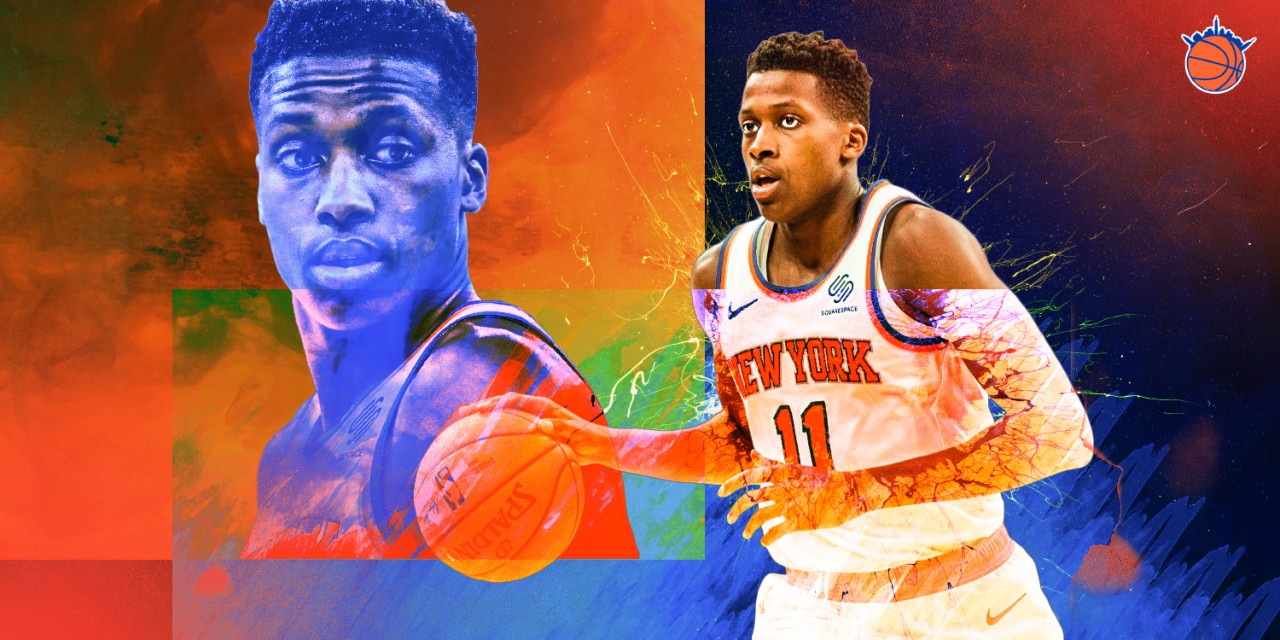 Tom Thibodeau is linked to the vacant head-coaching job for the Knicks. He could help third-year French guard Frank Ntilikina immensely.

Three seasons, 178 games, and a career 6.0 points per game on 36.6% from the field. Upon a cursory glance it’s easy to see why some fans would be at their wits’ end with Frank Ntilikina, the 21-year-old French guard the New York Knicks selected with the eighth overall pick in the 2017 NBA Draft—even without mentioning that All-Stars Donovan Mitchell and Bam Adebayo were taken five and six picks later, respectively.

Phil Jackson’s purported point guard of the future has become the most polarizing player of the post–Carmelo Anthony era. One segment of fans see only the jump shots clanging off the rim and his hesitancy to attack, the other faction—of which I consider myself a member—fixate on his versatile defense and his ability to conduct an offense when he’s playing with confidence.

There have been enough articles debating whether or not Ntilikina has a place on the Knicks going forward, especially with reports that new President Leon Rose is in the latter camp regarding the young Frenchman.

.@NY_Knicks_Fr asked about the possibility of the Knicks, under Leon Rose, keeping Frank Ntilikina next season. I don’t think anyone on the roster is off limits, but I also don’t see Rose shopping Ntilikina in the way NYK previously had: pic.twitter.com/W22D8GxXh3

Even a tepid endorsement, which essentially amounts to a hesitancy to give him away, is a stark change in messaging from the Knicks. As SNY’s Ian Begley mentioned, the Knicks were seemingly willing to part with Ntilikina for no more than an early second-round pick.

Pair this newfound organizational confidence with another recent rumor—that former Chicago Bulls and Minnesota Timberwolves head coach Tom Thibodeau is Rose’s next coach—and the stars may finally have aligned for Ntilikina. The free agent coach’s tenure with the Timberwolves has justifiably soured many on the prospects of a Thibodeau administration, but he may be the coach to get Ntilikina on the right track.

2010 feels like a lifetime ago, but under Thibodeau Derrick Rose blossomed into an MVP, Joakim Noah became an All-Star and a defensive anchor, and Taj Gibson went from a late-first-round pick to a solid contributor on a playoff team.

Some may point to the fact that Karl-Anthony Towns and Andrew Wiggins didn’t take the steps toward becoming All-Defensive team contenders under Thibs. Does the blame for that fall on him, or the players? Has the league caught up to Thibs, or for whatever reason will some players simply never reach their defensive ceilings? Ntilikina and Mitchell Robinson, another defense-first Knicks prospect, will test whether or not Thibs can still build a top-tier defensive unit.

The irony of Thibodeau coaching the Knicks is that Ntilikina truthers’ biggest gripe becomes their biggest fear: Knowing Thibodeau, Ntilikina won’t be wanting for minutes under his regime. The worry then becomes that Frank’s groin begins acting up again under the increased workload.

Hopefully there’s a way to split the difference between burying him beneath the bench and grinding him down into dust. Wishful thinking.

If they were to find a happy medium, then things might start rolling. Without having to constantly look over his shoulder wondering if any mistake might get him pulled, Ntilikina would hopefully find his rhythm on offense for longer than a few games. There have always been glimpses; perhaps that inconsistency is wired into who he is as a player, but if not, he’ll have to play through some rough patches to come out the other side. And players seem to play through a lot under Thibodeau.

Truth be told, Thibs would not be my first choice. That goes to Kenny Atkinson, who just recently dragged a desolate Nets team out of the muck and into the playoffs. His sort of modern offense would put Ntilikina (and the rest of the Knicks young players) in the best position to succeed on that end of the floor, which is where Frank needs to improve. Yet there’s been few if any viable rumors linking Atkinson to the Knicks.

Both coaches spent time on the Knicks’ bench as assistants, but one assumes that with Rose now running the show it will nothing like old times. Regardless of various opinions of Ntilikina as a player, the organization has been unnecessarily callous with him. They’ve seemingly given up on him multiple times, purportedly because he was Phil Jackson’s choice.

Both Thibs and Atkinson have spent time with winning organizations after leaving the Knicks. Thibs spent time with the McGrady-Yao Rockets before becoming the associate head coach for the Big Three Celtics. Before he was the Nets’ head coach, Atkinson worked for Budenholzer in Atlanta. These are franchises the Knicks should be replicating.

It doesn’t matter how little the previous front office valued Ntilikina; it would behoove the current administration to develop him as much as possible, if only to improve trade offers. Which gets to the heart of this new situation for the Knicks and Ntillikina: No matter how highly Rose thinks of Frank, he could end up getting shipped out of town just as easily as before. But, with the help of a front office and a coach who are committed to developing him, Ntilikina’s value both on the court and in a trade package would soar.