The Frank Ntilikina Conundrum: How Do the Knicks Wrestle With the Second-Year Guard’s Development Amid Obvious Struggles? 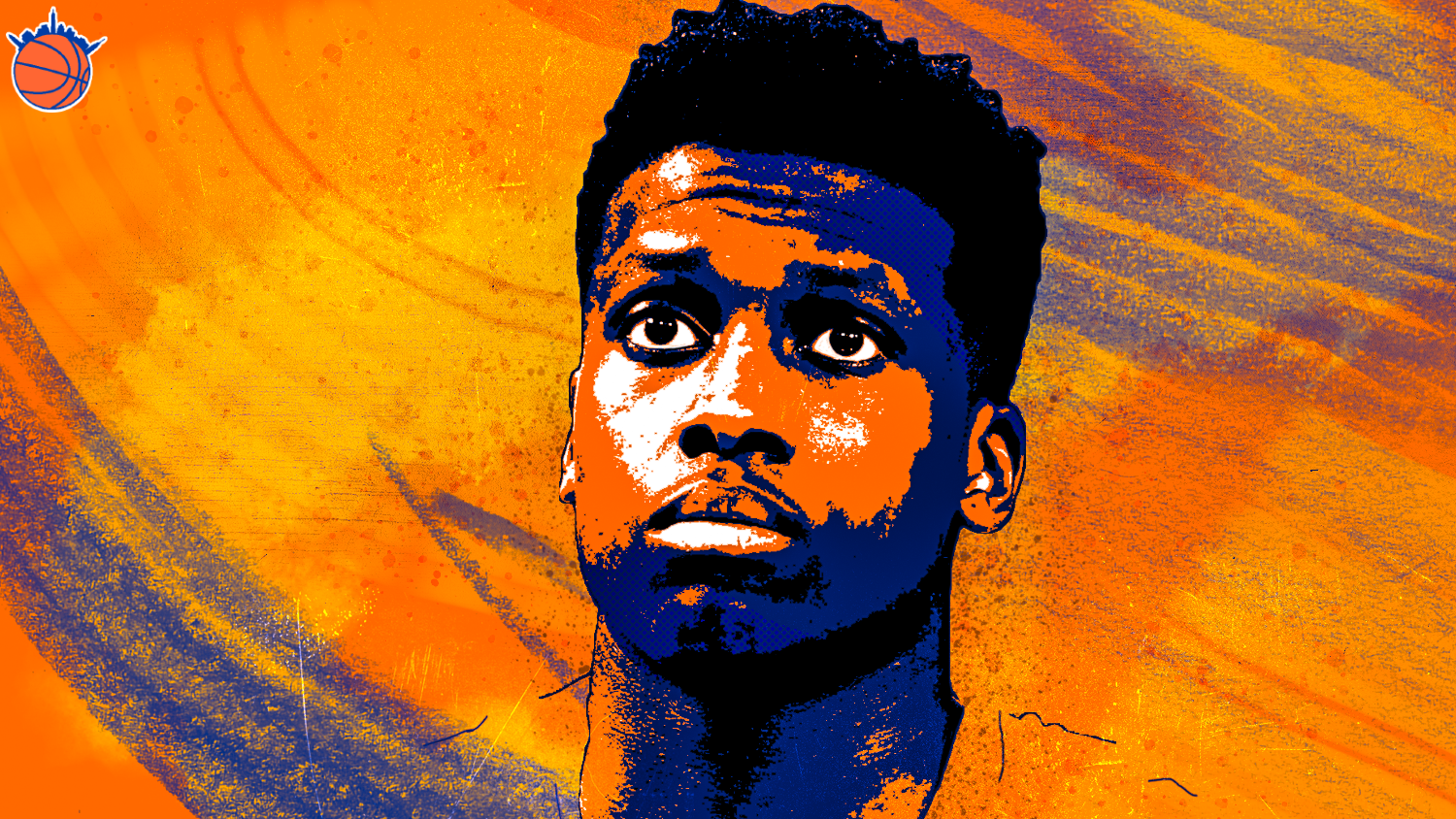 Ah, the Frank Ntilikina conundrum. Something that has, once again, reared its ugly head, and has managed to divide Knicks fans like a two-party democratic system.

On one hand, we have the Ntilikina supporters (or, in the words of his detractors, Frank apologists).

“Give him some time, he could be the next Magic Johnson!”

“At the very least, there’s a chance he could be Jrue Holiday!”

Right now, he’s looking more like a young Justin Holiday (a good player in his own right) than Jrue.

On the other hand, there are those Knicks fans that think Frank is an absolute bust, with visions of Donovan Mitchell and Dennis Smith Jr. infiltrating their brain space. In today’s NBA, drafting someone like Mitchell or Smith Jr. over the defense-first Frank Ntilikina is essentially front-office protocol.

While Frank’s selfless (almost to a fault) play style and intangibles at the position are admirable, it’s fair to wonder his legitimacy at a spot that, quite frankly, is the glamour position of the NBA. The point guard in today’s league is like the equivalent to a dominant center in, well, the 1970’s through early 2000’s.

Except, today’s point guard transcends luxury—a good-to-great one is a necessity.

Frank might not fit under the current standards of a modern-day NBA point guard, but not all is lost. Remember, folks—HE’S ONLY 20 YEARS OLD. I have plenty of stuff in my mom’s basement older than this guy. While it might be early to determine his value, it’s not too early to take a look at some of the good stuff the Frenchman does, along with some of the bad. And there is certainly plenty of both.

This year, Frank is getting a lot more burn under first-year Knicks head coach David Fizdale than he did with the old-school Jeff Hornacek. To start the season, Frank has averaged 26 minutes per game, starting every contest he’s played in. His minutes are up from the 21.9 per game under Hornacek, and he’s already been in the starting lineup in more games (14 games this year, nine last year) than he did all of last season. Granted, he started the first five games at the wing, but his nine appearances as the starting lead guard is still an improvement over the zero he started at the position last season.

However, Ntilikina’s play early on somewhat vindicates Hornacek and his conservative approach, especially considering Frank has actually improved on the offensive end this year despite his paltry numbers (7.3 points per game, 3.5 assists on 34 percent shooting from the field, and just 29 percent from three). We’re also seeing Fizdale—someone who isn’t hesitant in starting his young players—yank Ntilikina from the lineup early and often.

During the last game in particular, things came to an impasse as Fizdale pulled the Frenchman after just five minutes against the lowly Orlando Magic. At the time, Ntilikina was 0-of-3 from the field with two ugly turnovers, and he struggled to guard journeyman point guard D.J. Augustin. While the move itself was certainly warranted, what happened next was particularly jarring: Fizdale did not insert Ntilikina into the lineup for the rest of the game.

Instead, Fiz opted to go with former starter Trey Burke, who has managed to play his way out of the rotation to start the year due to inefficient shooting and lackluster defense.  While Burke, who started the second half, supplied the Knicks with his usual, to borrow a phrase from our own Walt Frazier, “matador” defense, he did give New York’s offense a jolt of energy with 10 points and five assists in just 20 minutes of action. Once again, Burke wasn’t very efficient (he shot just 5-for-13), but it was his mere competence on the offensive end that made him the superior option to Ntilikina.

Frank’s old-school, halfcourt, shoot second, third, or even fourth mentality could be an issue in David Fizdale’s high-paced, read and react offensive attack. Currently, the Knicks are ranked 20th in pace, and despite having the second-youngest roster in the NBA, haven’t necessarily run their opponents out of the gym. This is obviously not by design, as Fizdale has stressed pace of play early on.

According to Marc Berman of the NY Post, Fizdale has had to adjust to the Knicks current roster:

“It all sounds great when you come in and you say, ‘I want to do this, I want to do that,’ ” Fizdale said. “But you got to work with what you have right now. My job now is to try to put them in the best scenario to give them a chance to win games and to have success and grow. So our pace is definitely slow since then but I’m still emphasizing it, getting it up the court.”

This sentiment, undoubtedly, applies to Ntilikina, who is ranked 54th amongst all starting guards in pace. Not necessarily standout numbers for a 20-year-old point guard in an offense that is intended to be high-paced.

One thing about Fizdale’s “position-less” offense that bodes well for Frank is that most lineups do contain multiple ball handlers that can push the pace. Ntilikina, despite his improved handles, often seems to waver when pressured by his defender. He’s quick to pick up his dribble, and still shows a hesitancy to push the ball up the court when given ample opportunity to do so. Luckily, Frank’s usually playing with some combination of Tim Hardaway Jr., Noah Vonleh, Mario Hezonja, Allonzo Trier, Emmanuel Mudiay, or Burke, all who can handle the ball in varying capacities. Regardless, Ntilikina still struggles to knock down open jumpers in transition when he’s playing a pseudo, off-the-ball role.

And it’s not like his passing makes up for his lack of aggression on the offensive end. While Ntilikina clearly likes to defer to his teammates, he’s not necessarily doing a great job at it. He’s currently sporting a putrid assist to turnover ratio of 1.88, and hasn’t been particularly good either in the pick-and-roll, or at keeping his head up and finding open shooters on the floor. In short, he’s not really good at anything on the offensive end right now.

However, it’s that defense that makes Frank so damn hard not to root for. He routinely fights over screens, plays great isolation defense, and deflects passes like he’s ’90s Deion Sanders. But how does Fizdale get the most out of last year’s eighth-overall pick—a player the Knicks’ front office still remains bullish on?

Well, this might not be rocket science (in fact, it’s definitely not), but Coach Fizdale might be best served bringing Frank off of the bench.

While we could, and should, see 20-plus minutes from Frank, his skill set may be better suited to a reserve role. For starters, he’ll be going against weaker defenders in second units, which could bode well for his overall confidence. Secondly, he’ll get more scoring chances, in general, with the second unit, as opposed to deferring to lead dog Tim Hardaway Jr. on every possession with the starters.

As I’ve said before, Ntilikina’s versatility on both offense and defense could make him a more appealing option coming off the pine. That way, the Knicks could see his true positional flexibility in action. Depending on who’s struggling on a given night in the Knicks’ starting unit, Frank could essentially step in at the 1-4 and provide defensive intensity and (hopefully) some three-point shooting, along with his usual lunch-pail intangibles.

One guy we can compare Frank to is Marcus Smart. Despite being a streak shooter for most of his career, he’s become an incredibly important piece to the Celtics’ core off of the bench. Like Frank, Smart isn’t a true point guard, but can play the 1-3 in a pinch. Frank, with a little more aggression, could mold himself into a taller, more physically gifted version of the Celtics’ spark plug.

Sure, Frank isn’t Donovan Mitchell or Dennis Smith Jr., but he has the chance to mold himself into a viable, if not necessary component of a Knicks playoff squad. And at just 20 years old, who knows? Maybe his ceiling is higher than we thought. Perhaps he’s a late bloomer, and develops into an off-the-ball stud, à la DeMar Derozan. Or even Kawhi Leonard, someone who came into the NBA as a defensive specialist with a limited offensive skill set.

Hey, I’m a Knicks fan. I’m allowed to be delusional and optimistic.