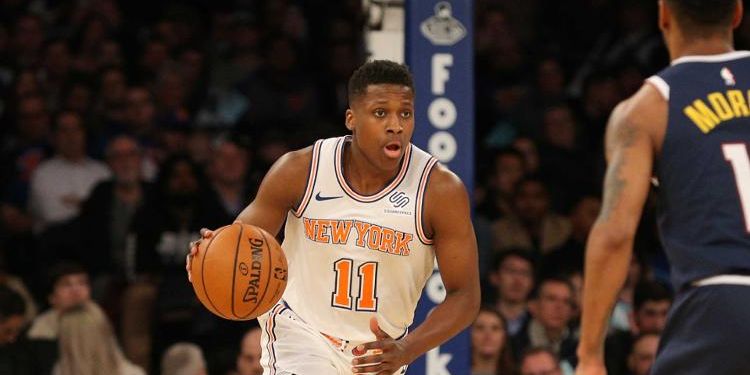 The second-year guard’s embattled season will finally end and speculation about the future of Frank Ntilikina will only grow into the offseason.

Frank Ntilikina, the second-year guard/wing, will miss the remaining seven games of the New York Knicks’ season, the team announced on Friday. Ntilikina had missed 24 games before returning last Friday against the Denver Nuggets. The following game versus the Los Angeles Clippers saw Ntilikina go down and not return in the second half.

A press release from the team retroactively confirmed that the injury Ntilikina suffered against the Clippers was a re-aggravation of the delicate groin muscle that sidelined the 20-year-old for nearly one-third of his sophomore season.

Frank Ntilikina re-aggravated his strained groin muscle during the March 24 game vs the Clippers. Subsequently, he was re-evaluated by Knicks medical staff. Following the re-evaluation, the team’s medical staff has recommended that he miss the final two weeks of the season.

Ntilikina averaged 5.7 points, 2.0 rebounds, 2.8 assists, and 0.7 steals in 43 appearances, 16 starts, and 21 minutes per game in 2018–19 (per Basketball-Reference). While the raw talent Frank possessed was never channeled consistently on both sides of the ball, the Frenchman saw stretches of improved team play in spite of his individual counting stats. The Knicks relied upon the young, position-less guard to defend opposing teams’ best perimeter players.

While Ntilikina remains of the team’s roster, and is still signed to his rookie contract with two years until restricted free agency, there’s waning confidence that the 6-6 guard will be on the Knicks in the long term. Since acquiring Dennis Smith Jr. in the Kristaps Porzingis trade, New York has leaned into making the former Dallas point guard—drafted one spot after Ntilikina—more of the focal point in the Knicks’ backcourt moving forward. Marc Berman of the New York Post reported Ntilikina could be packaged in a draft-day trade come June.

The Knicks drafted Frank Ntilikina with the eighth overall selection in 2017. Phil Jackson was then president of basketball operations for New York while now-president Steve Mills served as general manager. The ‘Bockers have slowly been removing the last vestiges of Jackson’s tenure in New York, and Ntilikina could be the next and one of the last pieces the former Bulls and Lakers coaching great attached to the Knicks’ future.

The Athletic’s Mike Vorkunov quoted David Fizdale answering with resounding indifference when asked about whether Frank Ntilikina is in the Knicks’ plans for the future. “He’s on our roster, isn’t he?” Fizdale said.

»READ: Parting with Frank Ntilikina might be best for both parties