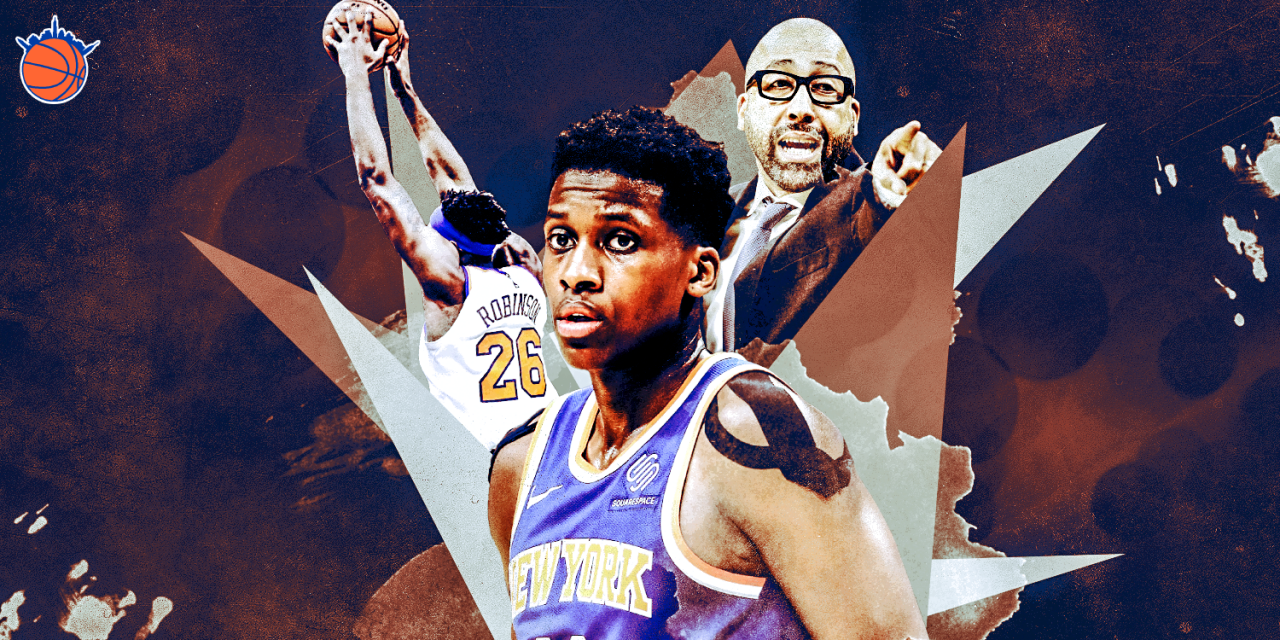 As the the Knicks head into the final stretch of the season, there are a few key storylines to monitor as they attempt to build a solid recruitment pitch to notable free agents, including the Frank Ntilikina situation.

There’s no way to sugarcoat how bad this season has been—it’s sucked. 11 wins in five months sucks. Tanking the year the league brings parity to the lottery sucks.

However, even the harshest critic would admit—it’s been worse.

The Knicks have been selling the future in the present for far too long. But for once, the present isn’t that bad.

Before the Knicks can reach their paradise, they have to finish eating their vegetables. This whole season has taken the phrase “it’s darkest before dawn” to a new level. Moral victories and individual performances have been the source of entertainment.

The first half of the season gave fans little to hold on to. With all fat trimmed from the roster, David Fizdale can sink his teeth into this team. What will a successful second half look like? Here are some key points.

One true critique of Fizdale this season has been the lack of an identity on the court.

When he was hired, he proclaimed to bring a more modern brand of basketball. The first 25 games were supposed to be the trial run before his plans kicked into gear. That trial run has extended to 58 games and counting. There is no question Fizdale has the ears of his young group, and it’s about time he starts to put them to good use.

The offense continues to have a pickup game vibe, with no plan true plan of attack. The result speaks for itself: the team has an offensive rating of 104.3, and a league-worst rating of 100.8 for the month of February.

The two largest problems plaguing the offense are ball movement and shooting. The team ranks dead last in assists per game with 19.9. They rank ahead of only the lowly Phoenix Suns in three-point percentage, shooting 33.6 percent.

The greatest solution could be ramping up the pace. So far, the highlight of Knicks basketball in 2019 was a five-minute stretch against the Raptors in which the team raced up and down the floor. That pace has been uncommon; the Knicks still rank middle of the pack in pace.

To his credit, Fizdale may be already working on modernizing the offense for the home stretch. When he finally benched Enes Kanter, it was to play a faster style of basketball he felt Kanter couldn’t thrive in.

DeAndre Jordan has been a good starting point for the type of big Fiz needs—now it’s time to put the plan in motion with Mitchell Robinson. The Mario Hezonja for Noah Vonleh swap provided the necessary spacing to speed things up. Perhaps Kevin Knox can slide up to power forward for the remainder of the season.

Knox in particular has been the beneficiary when the pace is fast. He becomes a different player. In the halfcourt, the ugly side of his youth—bad shot selection, lack of confidence, uninspiring defense—is amplified. But when he lives in transition, the deficiencies of the 19-year-old are better masked, while his strengths become more evident.

Knox’s offensive arsenal is still a work in progress, but two shots he relies on are his floater and transition three—both of which are often available at a faster pace. In his career game against the Sixers, Knox got going in transition, which gave him more confidence in the halfcourt. These are the the situations the coaching staff should look to get him into. A confident Knox is good for the team in the present and for the future.

As the front office prepares its recruiting pitches for Kevin Durant, Kyrie Irving, and any other A-lister, Fizdale must remember to create his pitch on the court.

Why would a star want to play here? Who should they want to play with? What type of system is used here? These are the questions Fizdale has sidestepped in the name of tanking. With a majority of the tanking finished, it’s time to see some progress.

Lately it feels like Mitchell Robinson was the Knicks’ first selection in the 2018 draft. Robinson has been the shining light in an otherwise dismal start to 2019.

It is not a hot take to say that he has usurped Kevin Knox as the top rookie in New York, becoming the team’s new centerpiece in the process. Despite playing criminally low minutes (17.9 minutes per game), Robinson ranks fourth in the league in blocks with 2.1 per game.

Over his last 15 games, he has led the league in blocks with 2.7 per game, outpacing starters who have nearly double the court time. His 14-point, 13-rebound, four-block performance against Joel Embiid (whom he blocked twice) and the Sixers was one of the best individual efforts of the season.

The next step for Robinson is a larger piece of the pie. Jordan stuck around after the deadline to be a mentor for Mitchell. That should remain the plan, but Jordan’s minutes should be dialed back.

Underpinning Robinson’s gaudy blocks and alley-oops is important progress. The one thing that kept him from staying on the floor was foul trouble. For the month of February, Robinson is averaging 2.6 personal fouls per game—down from his season average of 3.0. A more patient approach should lead to Robinson closing out games down the stretch.

The final 24 games should be used to gauge Mitchell’s ceiling. Is he good enough to anchor a defense? Can he become a threat outside of three feet on offense? Right now, all we know about Robinson is that he can swat shots and catch lobs. But there could be more. Fizdale has been prudent with his young big—now it’s time he let the the work shine through.

Frank Ntilikina survived the initial roster purge. As he watched fellow Phil Jackson remnants sent off to Dallas, Frank had to think his days in New York could be numbered. Teams did inquire about him, most notably the Magic, yet the front office rebuffed any attempts.

The new plan for Ntilikina could be what was always best for him to begin with: playing off the ball. The front office has toyed with this idea for some time. The Knicks’ interest in Collin Sexton and Trae Young in last year’s draft, the acquisition of Emmanuel Mudiay last trade deadline, and arrival of Dennis Smith Jr. at this one can be traced to this belief. And when you consider what Frank does well, it’s really not a stretch to believe this is the best place for him.

Ntilikina does have some positives in his game, the most notable of which is his impact on defense. Much on the other side of the ball remains desired. But on defense, he can be a true game changer. His new partnership with Smith Jr. could be the front office’s final attempt to get a read on the 6-foot-5 enigma.

A Smith Jr.–Ntilikina pairing has some potential. DSJ has proven to have a lot more dog in him than expected, leading us to believe he will not be a liability on defense. On offense he can continue to thrive with a low-maintenance partner. Smith Jr.’s ability to push the pace could also do wonders for Frank’s offense—Frank has performed better when he is going downhill, with less time to get in his own head.

Playing alongside Smith Jr. also carries some future implications. It gives the front office a dress rehearsal of what Frank could look like with a score-first backcourt mate. The not-so-secret plan for the summer is to pry Kyrie Irving away from Boston. How much easier is that pitch when you can sell Kyrie on a defensive-minded complement who doesn’t need the ball at all to be successful?

The jury is and will likely always be out on whether Frank was the right pick. One thing that cannot be questioned is his talent. The ability to guard any position is crucial. The ability to have an effect on the game without scoring a single point is another. These are Frank’s two greatest traits.

During this homestretch, Frank will get his chance to cement his future with the team, or wrap up a short stint in the Big Apple. A failed partnership with Smith Jr. and/or lackluster finish to his sophomore season could be the end of Frankie in New York.

The front office has had no quarrels cleansing the organization of any remnants leftover from the Jackson regime. So far Frankie is the lone survivor; the ball is now in his hands to remain a survivor or become the final casualty.