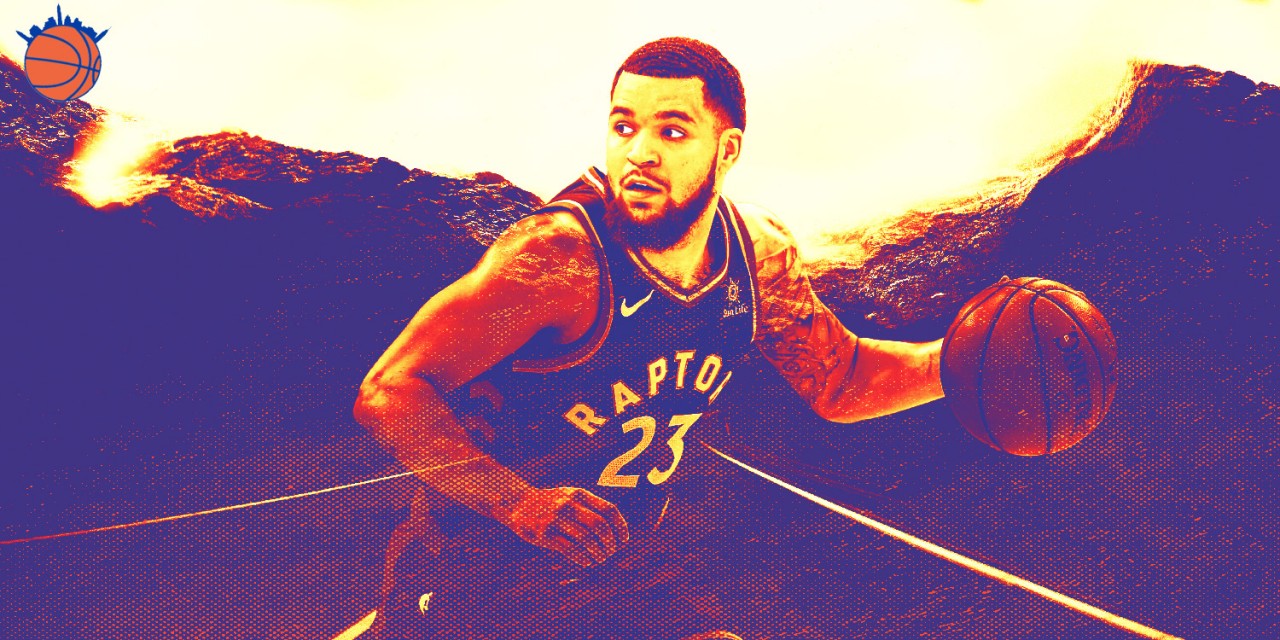 Raptors guard Fred VanVleet has been long linked to the Knicks, who desperately need a floor-raising, two-way perimeter player on the roster.

There’s a need for the New York Knicks to add talent to the top of the roster. Despite the talent and upside of R.J. Barrett and Mitchell Robinson, these two are viewed as the young pieces to build around, and the Knicks could use guys who can play to their level, if not better.


As much as fans focus on shooters to modernize their offense or a better power forward to slot alongside Robinson, getting someone who can raise both New York’s floor and ceiling could help as the Knicks develop their youth.

Fred VanVleet is the best (and most realistic) player the Knicks can acquire this offseason, making him the number one target for the Knicks in the fall.

Let’s remove star players and restricted free agents. Anthony Davis, by all accounts, seems happy in Los Angeles and is taking meetings to cross T’s and dot I’s before returning back to the Lakers on a max-level contract. As for restricted free agents, even though Brandon Ingram fits New York’s timeline and would give them another sub-25-year-old player to build around, the odds of New Orleans giving him away are slim to none.

VanVleet is the ideal floor-raiser for the Knicks, allowing them to move from the doldrums of the Eastern Conference into a respectable team. Before one can walk, they must crawl, and this move helps New York prepare for the next steps.

Entering unrestricted free agency, the Raptors will look to balance bringing VanVleet back while keeping their options open for a potential Giannis Antetokoumnpo pursuit in 2021. The right contract might price Toronto out of the race to bring back VanVleet; the type of contract the Knicks should look to offer this offseason to snatch VanVleet from a division rival.

In his first four seasons with Toronto, VanVleet moved from an undrafted afterthought to a key piece to the Raptors’ championship puzzle. His full breakout occurred in the 2018–19 season, where he averaged 11.0 points, 4.8 assists, and made 37.8% of his threes. Behind Kyle Lowry, VanVleet’s ability to impact the game on both sides of the ball was key in Toronto’s success. This year, VanVleet took it another level—17.6 points, 6.6 assists, 1.9 steals, and 38.8% shooting from three.

Alongside shooting, VanVleet offers solid creation (6.6 assists per game, 27.4% assist rate). He’s not the traditional point guard and lead ball-handler, but has shown throughout his Toronto career the ability to work alongside a wing who dominates the ball and create their own offense (DeMar DeRozan and Kawhi Leonard). In a world where Barrett becomes the player the Knicks want him to be, placing VanVleet alongside him is perfect.

Ideally, the Knicks should consider the addition of VanVleet and drafting another point guard.

In a world where the Knicks land a top-three pick and have the ability to draft LaMelo Ball, pairing him with Fred VanVleet and moving Barrett to the small forward role makes a ton of sense to supercharge New York’s offense. Offensively, VanVleet and Ball can space the floor, while all three can handle the ball and create off the dribble. Defensively, Ball has issues, but VanVleet has elite parts of his defense, while Barrett was solid for a rookie.

This idea of adding a point guard and VanVleet together this offseason also works with the likes of Iowa State guard Tyrese Haliburton or North Carolina’s Cole Anthony, if the Knicks remain in the sixth spot for the lottery. Having multiple players who can handle the ball, operate and create offense is key in having a successful team and there’s a chance this offseason for New York to add two players who fit that description.

Ultimately, the defensive side of the ball is where VanVleet can help change the Knicks.

Toronto ranks second in the league in defensive efficiency and part of that is due to VanVleet, whose 1.8 VORP is good for third on the team. Per NBA.com’s hustle stats, VanVleet’s 4.2 deflections per game rank first in the league while his 0.9 defensive loose balls recovered ranks third and he ranks in the top 10 with 1.4 loose balls recovered. While VanVleet isn’t an altogether elite defender outside of his proclivity for loose balls, he someone who can garner All-Defensive team consideration, which is something the Knicks lack.

Imagine placing VanVleet on the roster with Frank Ntilikina, Barrett, and Robinson. That quartet would offer New York four players with strong defensive abilities—with Ntilikina and VanVleet capable of locking up on the perimeter when need be. Having good defensive players allows New York to not only eschew strong defenders for better offensive options in the rotation, but also allows New York to create a defensive identity, something they’ve lacked since the days of Jeff Van Gundy and Pat Riley at the helm.

One last thing that appears to be a concern to some, but it shouldn’t: VanVleet’s potential contract. Even though VanVleet expressed the idea of taking a shorter contract, his status as a top free agent could result in earning somewhere between $15-18 million per season. For New York, a three-year, $60 million contract for VanVleet should not deter adding a two-way player who can elevate New York’s floor and ceiling.

For starters, New York has been financially stable over the last few seasons, avoiding the massive three and four-year deals to clog up their cap sheet. As a result, the Knicks are one of five teams to have upwards of $25 million in cap space this offseason. One contract won’t hurt New York’s future plans.

And finally, the Knicks have several young players to make up the bulk of the roster. In a world where VanVleet signs a three-year contract for New York, it would coincide with (hopefully) the second year of Mitchell Robinson’s contract extension, the second to the final year of R.J. Barrett’s rookie contract, and the third year of the 2021 first-round pick’s contract. If those players are deemed key pieces, then VanVleet is a perfect fit for where New York stands.

Fred VanVleet is an excellent player who will enter unrestricted free agency for the first time in his career. The New York Knicks should not only be interested but should push to sign him at the beginning of free agency. Over his four-year career, VanVleet has shown the ability to affect the game on both sides of the ball, while also offering solid playmaking ability and the ability to play off the ball.

And for the Knicks, a team that seems to want to move up the Eastern Conference standings in a hurry, Fred VanVleet should be viewed as a top priority this offseason.