Should They Stay Or Should They Go: Free Agent Knicks Reclamation Projects 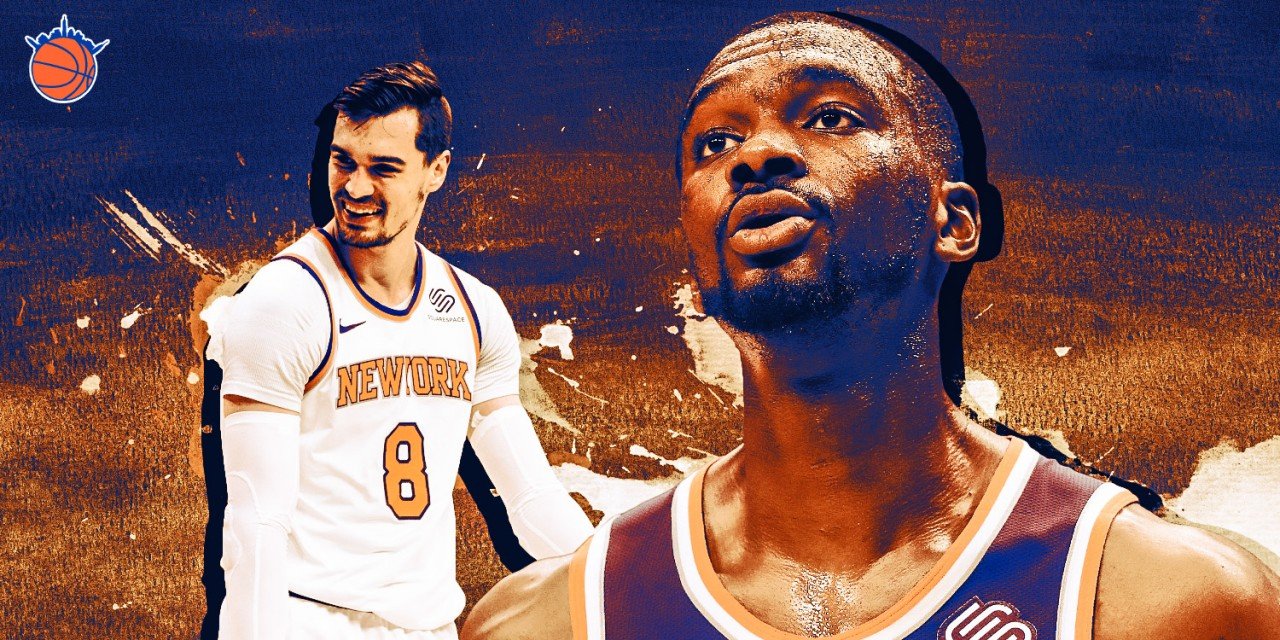 With another season nearly in the books, how have the Knicks’ lottery reclamation projects—impending free agents Emmanuel Mudiay, Mario Hezonja, and Noah Vonleh—fared?

April basketball has not held significance for the Knicks in six years.

The 2018-19 campaign has felt like a longer marathon than usual—like running a marathon through a desert with no water.

While this season has devolved into endless Tankathon lottery simulations and way too much Duke, for the guys on one year “prove it” contracts, the pressure is on to leave a strong last impression.

The roster has no shortage of these guys—eight to be exact, nine if you count Lance Thomas. That’s a lot of guys who have to be a little selfish in order to secure their future. It could also be the reason David Fizdale held back the reins on implementing his system—at least one hopes.

Chief among these expiring contracts are the lottery reclamation projects. Scott Perry’s talent acquisition phase (tanking) has been focused on recycling top prospects the rest of the league gave up on. The intention was not just to turn their careers around, but develop them into the fold.

A large part of developing that new culture is keeping guys in New York. Even if the gods bless us this summer, there is still a roster to fill out.

This season has given us a good feel for who is capable of what.

Who’s worth keeping? Today we look at which lottery reclamation projects are worth bringing back.

What better place to start than with Fizdale’s pet project. Before we delve into the basketball stuff, it’s crucial to establish why Mudiay has become such a polarizing figure among Knick supporters.

In a season that piled up more losses than a MoviePass financial report, someone had to be the fall guy. Mudiay has taken on that responsibility. He also reminds us how the team has failed with regard to Frank Ntilikina’s development.

The expectation coming into the season was for Ntilikina to develop into the team’s creator, playing with Mudiay. Instead Fizdale played Mudiay over Frank. Fizdale has rode with the former Nugget through thick and thin, while shackling the team’s own 2017 lottery pick to the bench at the first sign of struggle.

Now that Frank might be out of the picture for good, the thought of Mudiay coming back on top of that is quite infuriating.

On the surface, Mudiay has earned at least a hard look. He’s putting the finishing touches on a career year in scoring, context be damned. Mudiay leads the team in scoring with 14.6 points per game and has finally figured out how to finish at the rim, shooting a career-high 53.3% in the restricted area.

Most important of all, he seems to have finally conquered a foe that has had its way with him his whole career—efficiency. Mudiay is shooting a career-high 45.2% from the floor. His True Shooting percentage this season is 53.4, also a career high.

As you dig deeper, the underlying factors in Mudiay’s improvement lead to more doubt than confidence about his future outlook.

He has been most lethal 10-to-14 feet from the rim, where he is shooting 51.5%. Prior to this year, his career-high on shots from that distance was 36.1%. The other two seasons he failed to eclipse 30% from that range.

Yes, it is plausible the 22-year-old finally found his groove. At the same time, it’s also probably that Mudiay has been the beneficiary of a lot of low stakes minutes on a bad basketball team.

As we learned with Burke this season, a mid-range savvy guard is not going to move the needle. Mudiay may have improved his scoring, but even with that he has not had a positive effect on his team.

Per Cleaning The Glass, he has continued to be a negative for his team on defense. The bottom row represents this season, as Mudiay continues to rank among the bottom percentiles in the league at improving defensive efficiency while on the court.

Foolish, haphazard signings have been a commonplace in MSG for far too long. How the front office approaches Mudiay’s impending free agency will signal how new this era really is.

At best, Mudiay is a score-first guard off the bench, if you can talk yourself into believing his offensive improvement this season is more than an outlier. This role can be filled by better players, already on the roster next season—namely Dennis Smith Jr. and Allonzo Trier. A possible addition of Kyrie Irving only worsens Mudiay’s case.

But that hasn’t stopped the hints of a possible return. Marc Berman mentioned the team will explore draft night trades for Frank Ntilikina, possibly leading to a Mudiay extension.

This decision is quite simple. Mudiay has started 41 games, reaching the starter criteria for a qualifying offer of $5.75 million, with a cap hold for $12.88 million. That is a lot of money for a guy whose only identifiable skill is hitting fadeaway 13 footers.

With star chasing on the front office’s mind, it would be foolish to not let him walk at season’s end.

It feels like eons ago, but there was a moment when Noah Vonleh was the best player on the Knicks. Vonleh was the last of the lottery reclamations to sign, and the one with the least amount of fanfare.

Vonleh started the season as not just the best former lottery pick—he was the best player on the team. Injuries and roster turnover have seen his production take a bit of a dip, but he will finish this season with career-best numbers across the board.

He proved to be valuable on both sides of the ball. Per Cleaning The Glass, the Knicks scored 4.7 more points per 100 possessions with Vonleh on the court, and he ranked in the 83rd percentile in defensive rebounding percentage at 23.2 percent.

Ironically enough, Vonleh’s shot chart resembles what you would want from someone like Mudiay.

That extension to the three-point line is where Vonleh’s value spikes. The one thing that held fan favorite Kyle O’Quinn back was his unwillingness to extend his jumper beyond the arc. Vonleh doubled his three-point attempts per game this year, and connected at a modest 33.6%.

Vonleh is one of few players on the roster with a clear role in the team’s cloudy future. Fizdale’s player-friendly approach made him feel wanted, which could explain his metamorphosis from a rebounding specialist to a possible stretch four who can bring the ball up if needed.

The question about Vonleh is less should the Knicks bring him back, but rather at what limit. He has aptly replaced O’Quinn’s production at half the cost, and can continue to thrive as that big off the bench.

Unfortunately, the chances of Vonleh’s price tag staying at $1.6 million are slim to none.

If the market tilts in Vonleh’s favor and he fields offers in the range of $10 million a year, he is a goner. But if the market collapses, as it did for O’Quinn last year, bringing Vonleh back on a team-friendly deal is a no brainer.

Status: No-brainer re-signing if the deal is right

Mario Hezonja did not have a miraculous shift in his career this year. He is very much the same player he was in Orlando. Hezonja played scarcely aside from that odd stretch where Fizdale started him at the 4; the same position he was pitiful at with the Magic.

His luck at the 4 did not change—he averaged 5.4 points, 2.8 rebounds, and 1 assist per game. The shooting numbers were no better. Hezonja shot an icy 33.3% from the field and 28.6% from three. He had better luck in the starting lineup this time around, but still has not become the floor spacer he needs to be.

There was some success for Mario this season. He carried on the Knicks’ crazy no. 8 tradition. From telling Kanter to “get the fuck up and cheer” to having two of the team’s top-10 plays of the season, Mario would be welcomed back with open arms.

How can you not want to run through a brick wall for someone who made LeBron looked washed?

And triggered Giannis with a poster dunk that wasn’t really a poster dunk—but jokes over facts. He still stepped over him, so he gets my respect.

The good news about Hezonja is he will not be a hot commodity. The Grizzlies, Blazers, and Kings were the only other teams competing for his services last summer. Another subpar season should keep his suitors low, opening the door for a return after the team has done its heavy spending.

Hezonja will have nights where he contributes in a big way on the court, like his performance against the Lakers. But most of his value is as an end-of-bench glue guy.

Regardless of his playing time, Mario never sulked, unlike his buddy Kanter. He chose the Knicks largely because of Fizdale. In order for Fizdale to keep his pulse on the team—his greatest skill as head coach—he needs strong supporters in the locker room.

At the end of the day, Mario has to decide if he wants to keep his limited role. He is still 24 years old, and may grow into a bigger role in the future; by all means bring him back. Mario loves New York and New York loves him. Sometimes feeling wanted is all that matters.

Next week we will look at the contract-year players who were not lottery reclamation projects.

Status: Seat him at the end of the table