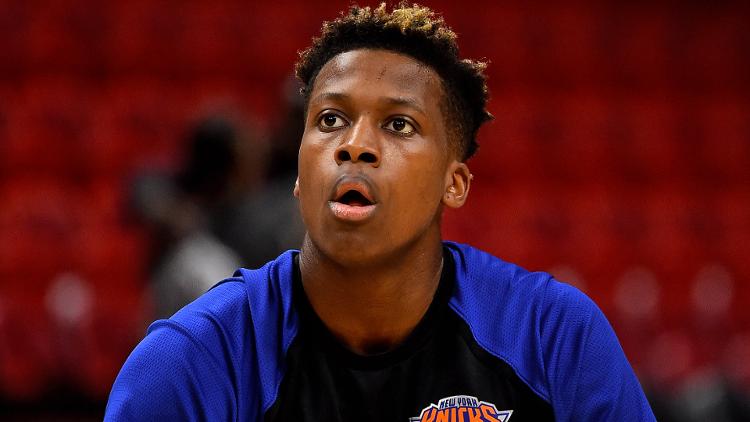 Growing reports of the Knicks’ front office’s impatience and pessimism with their second-year guard Frank Ntilikina have raised eyebrows once again about the franchise’s promise of a slow, deliberate rebuild.

After back-to-back scoreless performances against the Philadelphia 76ers and the Detroit Pistons—where Frank Ntilikina was virtually nowhere to be found earlier this week—his recent struggles have everyone tied to the New York Knicks (fans to front office executives) raising the question, “What should we do with Frank Ntilikina?”

Through 23 games this season, Ntilikina has averaged a meager 5.9 points per game. His shooting percentages have dropped from last season, converting on 33.3 percent of his overall takes and an ugly 25.7 percent from long range.

Things have been even worse for Ntilikina as of late. He started the first 14 games to begin the season and had strong performances against Golden State and Brooklyn in late October. However, his turbulent month of November saw him fall out of the starting lineup and slowly away from the bigger picture.

In November, Ntilikina averaged just 4.3 points per game, just half of last month’s mark of 8.8 per game. His numbers have also dipped everywhere else. Recently, he’s logged just under 15 minutes in each of the last four games.

While his playing time and stats drop, the rumors and rumblings surrounding other NBA teams interested in acquiring Ntilikina have only risen with each passing day.

It appears that the New York front office has entertained recent suitors, after initially labeling Ntilikina as off limits. If indeed true, that would be quite the contradiction and mistake for Knicks’ brass.

This is ultimately where I fall on it. Words were great, and needed, but we’re about at that infamous 25 game mark. Where does Frank stand in that new rotation Fizdale said he’d have around now? That’s what matters https://t.co/H8Nu2w3bSy

In a rebuilding year, with Kristaps Porzingis out for a big chunk of the season, a new head coach, and a team loaded with youth, patience should be a key ingredient for the Knicks at this time. Recent rumblings suggest that word doesn’t apply to Ntilikina. His shrinking role and rumors surrounding a potential trade seem to be feeding into skeptical fans and front office distaste with waiting for Ntilikina to finally find a groove offensively.

The quick change of heart seems to be more preemptive and impulsive. With new head coach David Fizdale, the Knicks and their front office reinforced a desire to work with Ntilikina and help him develop during the offseason. Just before the start of the regular season tipped off, they exercised his third-year option, which would keep him around until at least 2020.

Now, just about a quarter of the way through the 2018–19 regular season, it seems like New York is backtracking. If the front office does give up on Ntilikina, it would be a rash and irresponsible decision, but something that isn’t new.

He is only 20 years old—six years younger than the league-wide average player’s age of 26. Of the 449 NBA players that have seen the court at least once this season, Ntilikina is younger than 93 percent of them. There is plenty of time left before officially having the conversation of whether or not he is a bust, and there is still room for development.

His defensive ability is there, with a seven-foot wingspan and a willingness to defend multiple positions. Offensively, he’s shown flashes, but this frustrating dry spell could just be a temporary slump.

Should this front office impatience grow, it wouldn’t be the first time the Knicks were quick to deal away their young talent. As a matter of fact, even when players seemed promising in their first two years in the league, New York sent them away.

With the exception of Porzingis, who is still around, the Knicks have given away their All-Rookie NBA players since 2010. Landry Fields and Langston Galloway were gone after just two seasons. Willy Hernangómez didn’t even finish his sophomore year in New York and was traded midway through the season to Charlotte. Iman Shumpert lasted the longest of the recent Knicks All-Rookie players from the past decade, but not by much. He wore the orange and blue for three and a half seasons, before getting shipped off to Cleveland and winning a championship.

Tim Hardaway Jr. was traded away for the draft rights to Jerian Grant after his first two seasons. However, the Knicks were able to re-acquire him later, and he now is the team’s top scorer.

Ntilikina’s stats are far from sexy, but the Knicks have shown a pattern of giving up on their young players way too early. There is an argument that he’s poorly developed, although it’s possible that Fizdale and his staff can do a much better job at working with fledgling NBA players than Knicks coaches of the last decade.

Fizdale and Co. preach “position-less basketball,” something they have praised the versatile Ntilikina for being able to do. Unfortunately for him, he might be without a position on this team. So please, Scott Perry and Steve Mills, hands off the phone for now and let’s wait and see.