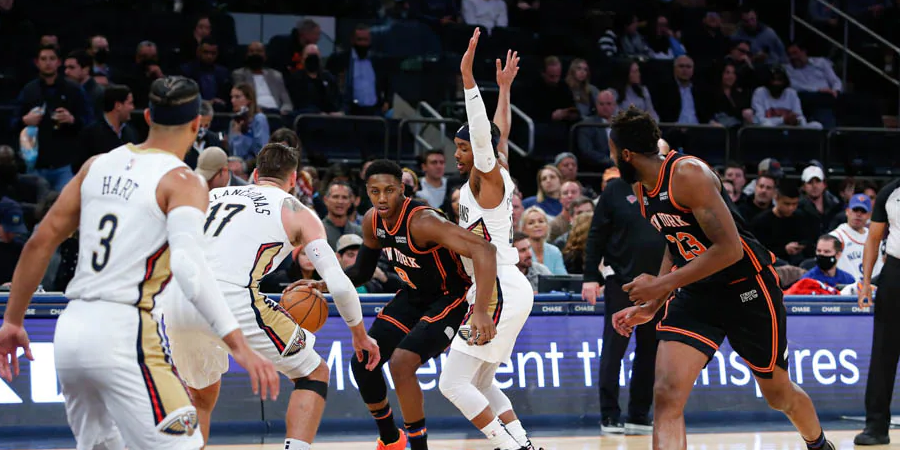 Knicks coach Tom Thibodeau and RJ Barrett spoke out after the Pelicans loss on regaining composure amid a homestand losing streak as the schedule only gets tougher.

NEW YORK, N.Y. — The New York Knicks have suffered a third straight brutal loss at home in a row after winning the previous. This time the culprits were the New Orleans Pelicans. In what was basically a wire-to-wire victory, the Pelicans dominated every facet of them. New York was not able to shake off the bad loss to the Minnesota Timberwolves and are now on a three-game slide.

New Orleans took a four-point lead at the end of the second quarter before running New York off the court in the second half. In the third quarter, the Knicks could only muster a meager 15 points while the Pelicans erupted for 35 and built a 25-point lead. Pelicans guard Devonte’ Graham scored 12 of his 15 points in the third period. Every Pelicans starter was spectacular on the night and each of them was able to connect from behind the arc.

The Knicks’ starters on the other hand weren’t so hot. Only Mitchell Robinson, who was a demon on the boards with 15 rebounds to go with 17 points, showed up to compete. Robinson was the only starter to play in the fourth quarter, while the other four starters watched as their center, along with the bench, tried to mount yet another, all-too-familiar, fake late comeback.

Mitch has been fantastic tonight. right out of the time out, IQ lob to Mitch!! pic.twitter.com/B8tFOz9nrj

Head coach Tom Thibodeau commented on something people have become very accustomed to this season—going with the bench over the starters late. “They played with a lot of energy and their defense is what got them going,” the second-year coach told the press after the game. “We started moving the ball a little bit and they knocked a couple of shots down, but we had a couple of easy buckets and that got us going and that’s where we are right now.

“When you get down like we were, you’re looking for some type of spark and I felt like those guys had cut into it pretty good, so I felt like that group was going, so let’s just go with it,” Thibodeau added. “We get into stuff together, so we have to get out of stuff together, that’s the way it is. We needed everyone out there, some nights you’re flat and your bench gives you that spark and that’s what we’re hoping for.”

The final score of 102-91 doesn’t tell the whole story, the Knicks were never really in the game. The Pelicans dominated early and put the game to rest in the third period of the contest. RJ Barrett put it in the simplest possible terms. “They made shots. They made a lot of shots and we didn’t.”

The Pelicans seemed to have an answer for everything the Knicks were doing and New York had no counterpunches. “I think that knowing when we stopped what they’re doing, we stopped Brandon Ingram, the other guys made shots,” Barrett said on what went wrong defensively. “I think that was the difference.” Every New Orleans starter was able to score double-digit points. The Pelicans shot 50% from the field compared to the Knicks, who would finish shooting 37.7%.

The Knicks seemed to be out of the game from tip-off, halfway through the first quarter they had only scored six points. Julius Randle struggled shooting just 1-of-9 on the night; the NBA’s Most Improved Player’s emotions boiled over and he was handed a technical foul for arguing with officials. “Julius is going to take a lot of blame, he gets a lot of the credit, but that goes with the turf,” said Thibodeau on his star’s rough outing. “But it’s a team game and we didn’t get into it with any one individual … Sometimes things go your way, sometimes they don’t and when they’re not going our way, I just want us to be mentally tough and be able to work through it.

“It’s a long game, it’s a long season, you have to come in day after day and stick with your routine.”

As the month of January winds down and the calendar flips February the schedule becomes much harder. So far this month the Knicks are 5-5 and they didn’t exactly take full advantage of some softer opponents. Beginning on Sunday with a 1 p.m. matinee, the Knicks face Clippers in the final game of the long homestand. Los Angeles has been underwhelming at 22-24, but they are sure to cause trouble in the Garden. Things don’t get much easier for the Knicks after that, they hit the round to face the surprising upstart Cavs, the no. 2 seed Heat, and finally, the defending champion Bucks. Things could get really ugly really fast.