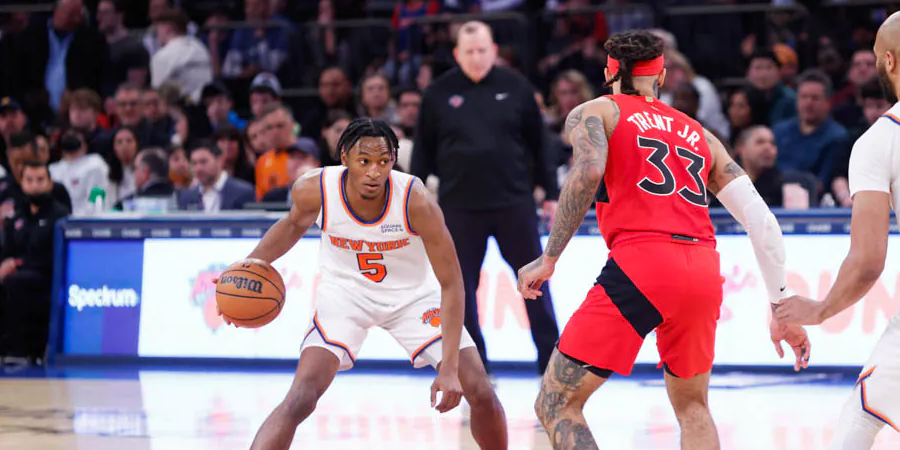 Immanuel Quickley and Obi Toppin left an indelible mark on Knicks fans with a season finale stunner, both tallying new career-highs against the Raptors.

NEW YORK, N.Y. — Obi Toppin and Immanuel Quickley’s career-high nights leave the New York Knicks with questions for next season. This game, the final of the 2021–22 season, had no effect on either team’s place in the standings—the Toronto Raptors were locked into the fifth seed and the Knicks had already been mathematically eliminated from the play-in tournament. New York only had eight players available, but two of them, Obi Toppin and Immanuel Quickley, gave the fans who still showed up to Madison Square Garden a glimpse of a potentially bright future.

Toppin scored 42 points, becoming the fifth Knick (Kemba Walker, Evan Fournier, Julius Randle, and RJ Barrett) to score 40-plus this season. It comes right on the heels of what had been his previous career-high of 35 against the Washington Wizards Friday night. Sunday night, Toppin went 16-of-28 from the field, hit six of the 14 three-pointers he attempted, and was a perfect 4-for-4 from the free-throw line. He also had 10 rebounds, three assists, and a block.

Toppin attributes his better shooting to head coach Tom Thibodeau’s trust in him. “I feel like as the confidence got better, as soon as I catch the ball,” said Toppin postgame. “I am going to shoot it and that is what Thibs tell us to—if we are open shoot the ball. I am not thinking I am coming out [if I miss] I am just playing basketball.”

OBI HAD 23 POINTS IN THE FIRST HALF pic.twitter.com/ebP4yZKYHP

Quickley, in what was his third start of the season and the sixth of his career, made his pitch to start at point guard next season with his second career triple-double. He scored 34 points to go along with 10 rebounds and 12 assists. Seven of those dimes went to Toppin as the pair continued to show off the chemistry they’ve built over the course of their first two seasons in the league.

“I feel like I am just going out there and playing,” explained Toppin. “I have great teammates who are finding me on lobs and finding me in different situations, but all of the credit goes to them… having a brother like [Immanuel] Quickley, he is in the gym at 2 a.m. sometimes and will call me and ask to come to the gym with me. Having a guy like that who works hard every day is great and to help the team be successful, you need a guy like that.”

Obi and IQ now each have 29 points pic.twitter.com/2y1O5mKY6P

New York now has to determine what role these young players will have going forward. Quickley seemingly has a clear path to being the starting point guard, but the Knicks need to figure out how Toppin fits Julius Randle cemented in that starting power forward position, for now. Many fans see Randle as the personification of this disappointing year, going from second-team All-NBA and having home-court advantage in the first round, to struggling, pouting, and subsequently missing the play-in tournament.

Team president Leon Rose mentions Randle in the same breath as New York’s neophytes, in an interview with MSG Network’s Mike Breen pregame, alluding to the fact that Randle is 27, by no means over the hill. However, despite their protests, the possibility remains that Randle could be traded, in which case Toppin would be thrust into a much larger role.

Much is to be decided this offseason, though Quickley’s attitude will likely serve him, and his friend Obi well, assuming they’re as in sync as they appear on the floor. “You navigate inconsistency by controlling what you are able to control and that is working hard, trusting God, and staying committed to the grind,” Quickley told reporters following the final game of his sophomore season. “Things you can’t control, that is something you can’t worry about, you have to worry about the things you can control.”