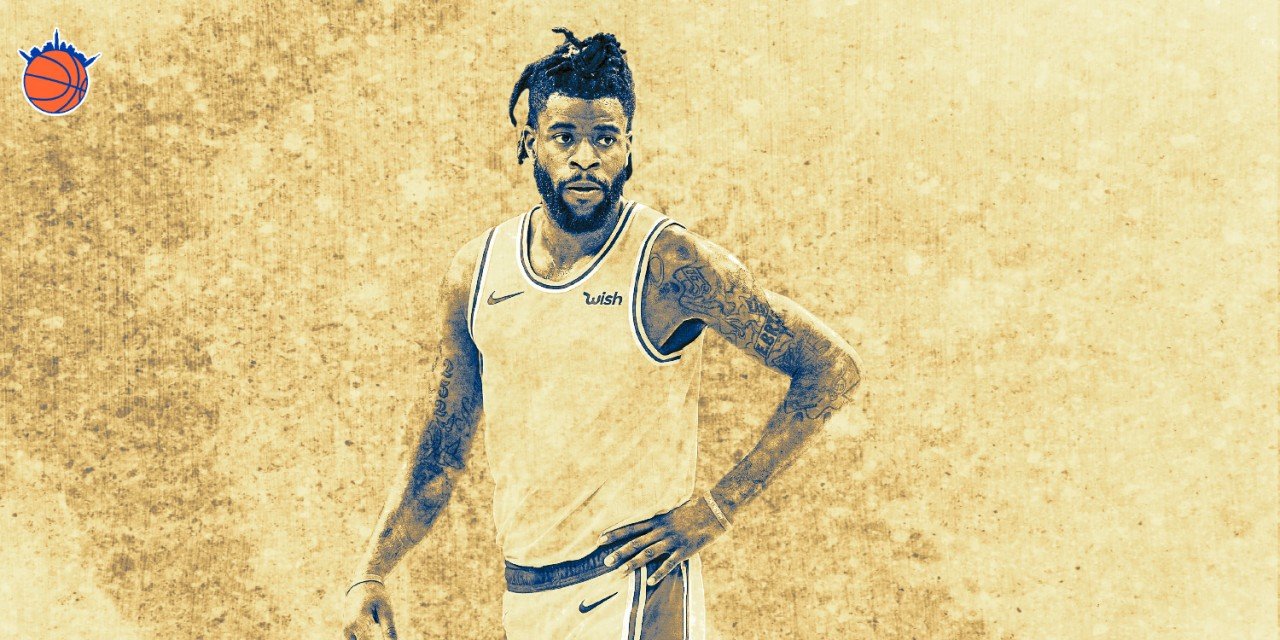 The Knicks renegotiated their deal with free agent wing Reggie Bullock after it was discovered the veteran is nursing a cervical disc injury.

On July 16th, The Knicks inked Reggie Bullock to a two year, $8.2 million deal. The agreement initially looked to be set at two years and $21 million, but concerns over the 28-year-old wing’s health caused a last-minute reworking. Bullock ended up signing an extremely team-friendly contract; the second year is a team option, and the deal came in under the $4.7 million exception, allowing the team to pry Marcus Morris away from San Antonio.

Reggie Bullock has signed a 2-year deal with the Knicks for less than the $4.7 million exception. His agent, David Bauman, says the “Knicks were fantastic through this process.”

(For what it’s worth, despite the revision, Bullock’s camp appeared to be completely understanding of the Knicks’ thinking, and he seems happy about being in New York, so that’s good.)

It all made sense a day later, when it was announced that Bullock would undergo surgery for cervical disc herniation in his neck and be out indefinitely. He’ll be reevaluated at the start of training camp, and, fortunately, the injury is one from which players can fully recover (see: Broncos’ Peyton Manning). Still, some have speculated that Bullock could miss a large portion of the 2019–20 campaign—from one month to the entire season.

Even prior to the recent neck issues, Bullock has been fairly injury-prone dating back to his freshman year at North Carolina, when he tore his left meniscus. In the 2016–17 season, he tore the same meniscus again and dealt with hip and back issues. Last year, his best season as a pro, he played the most games in his career (63), but plantar fasciitis caused him to miss a chunk of games down the stretch.

Partly due to injuries, Bullock hasn’t quite lived up to expectations. The 2013 first-round pick, selected 25th by the Clippers, has played for both L.A. teams, Phoenix, and Detroit, with a career average 6.8 points per game. He’s long been heralded as a sniper (and in one tough beat, the next Casey Jacobsen). In Detroit (and briefly with the Lakers), he took advantage of an increased workload to post double-digit scoring seasons, with his best year coming in 2017–18, when he drained 44.5% of his shots from downtown and averaged 11.3 points per game.

In 2018–19, he made 148 triples overall, which would have easily been the most on the Knicks, who ranked toward the bottom the league in three-pointers made in 2018–19.

Reggie Bullock's game-winning shot as a Piston vs. the Raptors pic.twitter.com/DkGOcaeZEJ

Bullock is primarily a spot-up shooter with a quick release—62.5% of his threes last season came off touches of fewer than two seconds. In fact, he’s almost exclusively a three-point threat. He rarely shoots around the rim, and two-thirds of his field goal attempts came from downtown in 2018–19, with the vast majority coming on catch-and-shoot looks and off zero dribbles. Over his career, his best spot has been the left corner, but he’s shot above-average from all areas of the court. He’s skilled at moving without the ball and has a knack for quickly repositioning into catch-and-shoot looks.

Reggie Bullock ranks 4th in the NBA in scoring on catch-and-shoot shots (6.9), with only Steph, Klay and Buddy Hield averaging more.

Look for him to be the go-to guy when LeBron draws double-teams.

If Bullock is able to contribute, he could be a bargain. His presence will stretch the floor, and he can easily shift between two positions. Ideally, he would serve as a competent 3-and-(some) D player, but he’ll need to improve his defense in order to earn that label. Bullock’s Defensive Rating per 100 possessions was equivalent to James Harden’s last year.

If, and when, he can play, it’ll be interesting to see where Reggie’s minutes come from. The team also signed another veteran wing shooter, Wayne Ellington, to round out a crowded backcourt that also includes Elfrid Payton, Frank Ntilikina, Dennis Smith Jr., Damyean Dotson, Allonzo Trier, and R.J. Barrett. It’s always good to have wing depth—especially for a team that struggled so mightily from deep last season—but all of those guys likely view themselves as rotation pieces, and Bullock’s sustained injury won’t help him get a leg up in the competition.

Either way, Bullock seems like an impressive dude and a good guy to have around, and not just because his Twitter account is solely devoted to doling out charming motivational proverbs:

The real challenge is enjoying the process

Off the court, he’s a staunch LGBTQ rights advocate, fueled by the tragic death of his sister in Baltimore in 2014. He brought the crowd to its feet speaking out for LGBTQ rights during the GLAAD Media Awards in 2018, and I would encourage you to watch the VICE Sports segment on his activism.

Hopefully Bullock can make his Garden debut sooner rather than later and can build off of the promise he showed the last few seasons. Regardless, as the Knicks aim to improve their culture as much as their record, bringing in Reggie Bullock should have a positive impact on Barrett and the rest of the locker room, even if he doesn’t suit up right away.