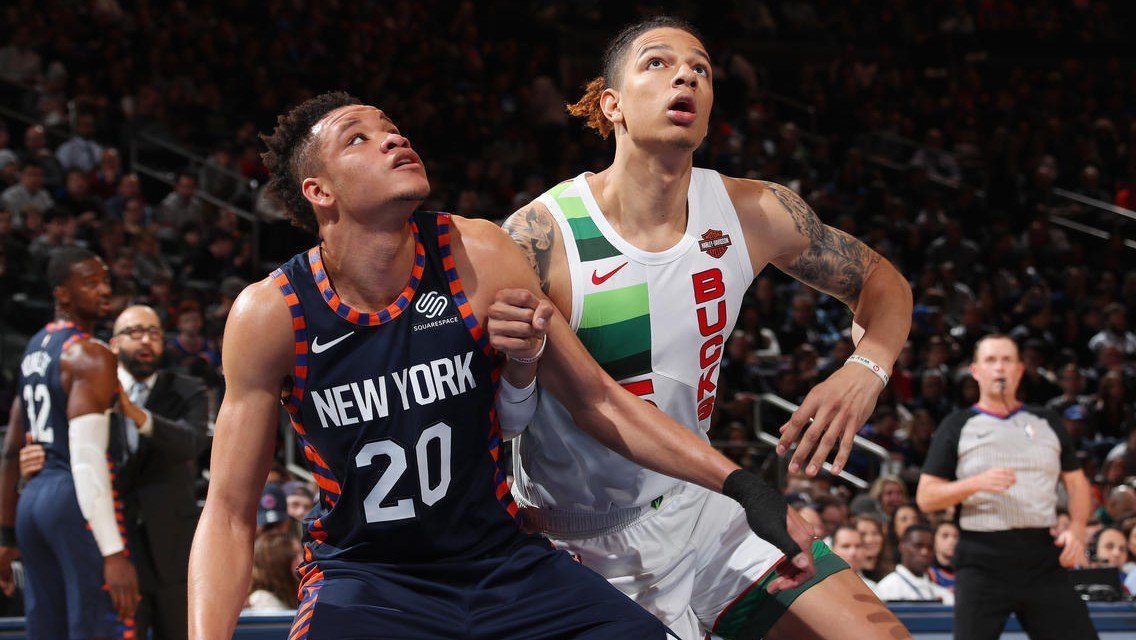 Giannis and the Bucks dismantled Fizdale’s team on Christmas Day in a disappointing effort for the Knicks on the holiday.

The New York Knicks (23-10) hosted the Milwaukee Bucks (9-26) for a Christmas Day contest, New York’s 53rd total St. Nick game; it was Milwaukee’s first Xmas matchup since 1977. In lieu of presents, the Knicks opened a 6-foot-11 wrapped Giannis Antetokounmpo, still dismayed from the two teams’ last meetup in which Mario Hezonja dunked and stepped over the Greek Freak. Hezonja didn’t find time off the bench, but Antetokounmpo certainly dished out revenge to the Knicks, defeating the home team 109-95.

Both teams struggled shooting from the floor in the first half, with shots vectoring off iron. Strong play from Antetokounmpo bolstered the Bucks as the Greek Freak closed passing lanes and tipped passes, resulting in fast-break opportunities and highlight dunks.

New York’s rookie forward Kevin Knox, however, demonstrated another solid start. The 6-foot-9 small forward out of Kentucky was quick to release three-pointers (1-of-5 overall) and his aggressiveness early on was rewarded with free-throw trips.

The Knicks were flabbergasted defending Brook Lopez, who has been a nice complementary piece to Giannis and Milwaukee, extending driving lanes for Antetokounmpo by spacing the floor and becoming a reasonable deep-ball threat (a career-high 35.1 percent on the year). Lopez was mainly guarded by New York starting center Enes Kanter. While Kanter was a dominant low-post player, he even snuck in a triple of his own—the Turk’s sixth make from distance this season. Nonetheless, Kanter’s inability to fight over screens, mobilize, and chase his man cost the Knicks open looks from their opponent.

Luckily, at least for long stretches of the game, the general malaise hanging over Madison Square Garden prevented the Bucks from cashing in these wide-open chances.

At one point, the Bucks had missed 16 consecutive three-point attempts—reminiscent of the Houston Rockets’ Game 7 performance wherein the team missed 27 straight triples. Coach Budenholzer’s defense, though, helped propel Milwaukee to a victory as Giannis and co. tipped passes and forced turnovers, breaking the Knicks’ (at times) zone defense and slow fast-break resistance.

Antetokounmpo is almost as fun on defense as he is on offense. In the halfcourt, Giannis is somewhat limited to post-up possessions with a rare mid-range attempt, but the Greek Freak succeeds in expertly reading opponents’ passes and utilizing Kristaps Porzingis-length wingspan to block shots—both physically and mentally for, in this case, the Knicks.

While the Greek Freak mostly had his way with the Knicks, Noah Vonleh should be commended for his sticktoitiveness in defending the All-Star, including this highlight block and mini–step over:

Albeit on poor shooting, Kevin Knox remained aggressive and focused as the budding focal point of the Knicks’ offense. While Tim Hardaway Jr. shot 4-of-18 from the floor, Knox’s 21 points on 20 attempts were falling from different spots on the floor—his floater was especially sharp.

He hasn’t exactly read the floor and slowed down the game like a quarterback yet, but Knox is on a nice pace to be deliberate and attack given the bright green light for the 19-year-old.

Knox AGAIN with the floater.

Utilized the screen by Kanter well, gets into the paint and that floater is ? pic.twitter.com/VksgS6G1Hk

Per ESPN, Knox became the first rookie since Patrick Ewing to score 15+ points in eight straight games—with both players achieving the feat on Christmas Day.

With fans eager to see 20-year-old Frank Ntilikina play on Noël, Burke suctioned all of the Frenchman’s reserved minutes. Shooting 1-of-7 from the field. Burke was also a tremendous liability on defense. Now we’re left wondering whether Ntilikina will be left out of the rotation again or worse—for devotees—on the trading block.

The Knicks have tried to integrate their raw 2017 lottery pick into the team, but seemingly can’t afford to let Frank play with young players Knox, Allonzo Trier, Emmanuel Mudiay, and Damyean Dotson. It’s a question the team has been grappling with since his rookie season—but ultimately, zero playing time in a blowout by the third quarter is a poor reflection on the franchise that wants its high picks to succeed long-term.

The Knicks’ next opponent? Well, that’d be the Milwaukee Bucks in two days for the second game of a home-and-home series.