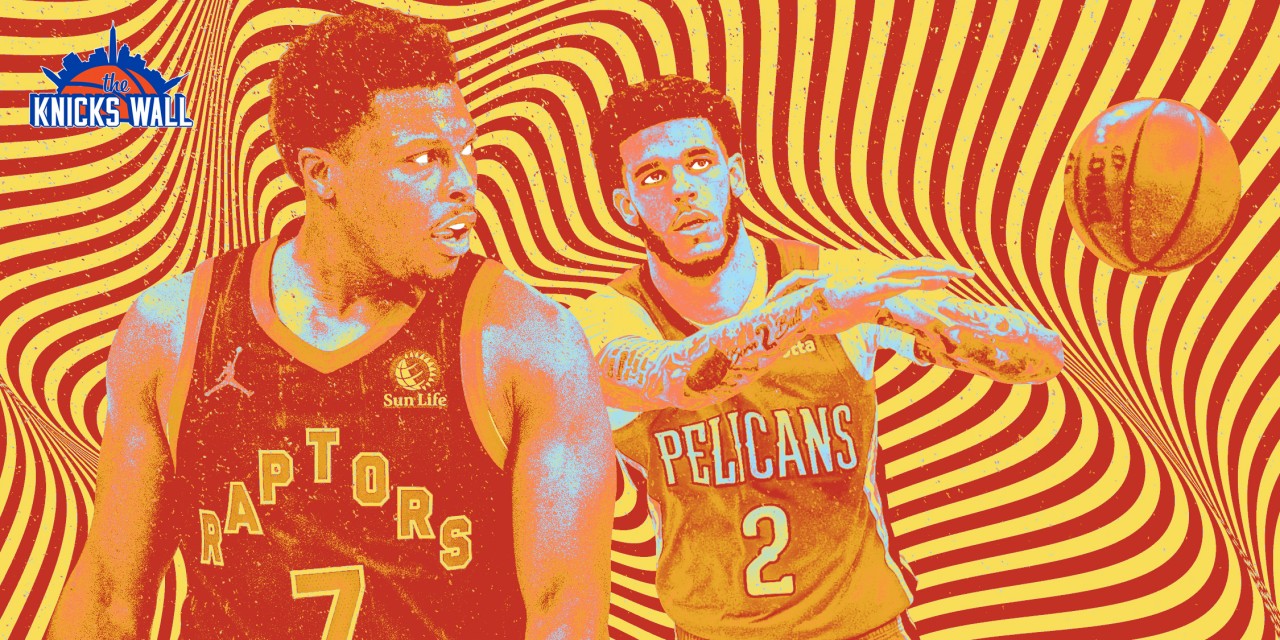 The New York Knicks are making the playoffs and will enter the offseason with cap space and several options. Here are eight options for the ‘Bockers this offseason.

You may have heard: the New York Knicks are heading to the playoffs.

This accomplishment is nothing short of monumental, and not just because it means Madison Square Garden will host an NBA playoff game for the first time since 2013.

The pleasantly surprising success signals that the franchise is ahead of schedule in the first year under a new administration and coaching staff. In all areas—player development, culture rebuilding, media discipline—the Knicks have functioned like a competent organization, with two emerging stars and an exciting, tangible future.

Encouragingly, Leon Rose pulled this off without spending capital yet. The Knicks largely and prudently stood pat during 2020 free agency and before the trade deadline in March.

The approach will be different this summer. The Knicks will have up to $60 million in cap space, more than enough to overpay at least one player who can help them reach the conference finals. With the team closer to real contention than they could’ve possibly envisioned, Rose, can finally open the checkbook or trade for a star, possibly named Damian Lillard, Karl-Anthony Towns, or Bradley Beal.

The Knicks project to be major players on the free agent market. Let’s run through eight possible targets and hypothetically grade each option. (Caveat: I do not include Kawhi Leonard, Chris Paul, or Victor Oladipo here, as it seems all three will stay put, the former two picking up player options. If the buzz on that changes, I’m sure we’ll cover it at TKW.)

As everybody who has watched the starting six minutes of each half this season can tell you: the Knicks need an upgrade at point guard more than anything else. Derrick Rose and Immanuel Quickley have been great, but they aren’t long-term, traditional lead guards. Rose may not even be back. Conveniently, the point guard market is deeper than any other position. In my opinion, the most alluring option is Ball, whom the Knicks opted not to spend assets to acquire at the trading deadline.

For myriad reasons, Ball seems like an ideal fit in New York. First and foremost: he’s a young (23) and improving floor general whose top three skills are passing, defense, and three-point shooting.

"He’s got a chance to be an All-Star player. I think he fits exactly what the Knicks are looking for.”

A longtime NBA scout explains how Lonzo Ball would fit with the Knicks (via @IanBegley) https://t.co/a5nwephVvo pic.twitter.com/w4dwNBBZwl

The former UCLA Bruin has made a dedicated effort to become a better off-ball player over the past two seasons. With the Knicks, he offers an upgrade to the point guard position while offering Randle and Barrett plenty of opportunities to run the show and create offense. In his fourth season, Ball is putting up 14.3 points, 4.7 rebounds, and 5.9 assists per game, with by far the highest Win Shares per 48 minutes of his career. This season he’s amongst the league leaders in catch-and-shoot threes, making 2.3 per game at a 40.8% clip.

According to a report from The Athletic, Ball is looking for $20 million annually. Sign him (and me) up.

Personally, I would emphatically endorse this signing for the Knicks.

Lowry is in the latter stages of his illustrious career but can still absolutely ball, as the Lakers found out first-hand on Sunday.

In his age-35 season, the six-time All-Star is basically as good—and as infuriating to compete against—as ever. Lowry is averaging 17.2 points, 5.4 rebounds, and 7.3 assists while shooting nearly 40% from deep. Not surprisingly, he leads the league in taking charges.

Remember: many Knicks fans vomited at the thought of adding Chris Paul’s contract a couple of years ago. Well, ask the folks in OKC and Phoenix whether his influence on their young rosters was worth the cost. Lowry isn’t as good as Paul, but he’s a prototypical Thibs Guy and championship-caliber veteran who could make a similarly positive impact—on and off the court.

I made the Schröder case a few weeks back so that I won’t rehash it too much. Like Lowry, Schröder is a gritty competitor who plays with a chip on his shoulder and a hounding on-ball defender who never takes a play off. His energy is contagious, and his quickness can be game-changing in spurts.

Schröder, 27, has been improving his “floor general” game throughout this season, though he’s not the passer nor sniper Ball is (well, maybe on Warzone). Schröder is averaging 15.5 points, 3.5 rebounds, and 5.8 assists as Los Angeles’ starting point guard for the season.

Not only can he create, but he has the ability to properly balancing his offense and his team’s offensive, most notably when he plays in lineups without LeBron James and Anthony Davis. Recent rumors suggested that he’s looking for money similar to Ball, as evidenced by his recent decline of a four-year, $84 million extension to return to Los Angeles. I’d rather overpay for Ball, but Schröder would be a solid consolation prize. As a culture fit, the scrappy guard would instantly be embraced by the fans and his coach.

Robinson is looking to get paid this summer, and probably more than the Heat can offer. For the past two seasons, the 6’7″ forward has shot 42.6% from downtown on 8.4 attempts. High-volume shooters don’t get much sharper than that.

The 27-year-old, entering the fourth season of his improbable NBA journey, will likely seek a deal similar to what Joe Harris (four years, $75 million) or Davis Bertans (five years, $80 million) pulled. However, with several guards, including current Knicks wings Reggie Bullock and Alec Burks hitting the market and his own pending restricted free-agent status, the former Michigan sharpshooter could see his value suppressed a bit.

Any team could use a sniper like Robinson—who can hold his own his other areas of the game, too, and is used to playing in a defense-first, demanding environment for Erik Spoelstra. If the Knicks lose Reggie Bullock, they may be in serious need of shooting. Why not splurge on one of the best?

Powell will surely decline his $11 million player option, which is why the Raptors traded him to Portland in March. The Blazers will have the chance to retain him and keep him alongside Damien Lillard, C.J. McCollum, and Robert Covington, but not without Powell testing the market to see what available for him on the other side.

Powell, now with the Blazers, is having a career-best campaign. In 63 games in 2020–21, the 6’3″ two-guard is scoring 18.7 points per game, shooting 48.2% from the field, 41.1% from three, and 86.6% from the charity stripe. He’s not an All-Star, but he would add a clutch extra scoring punch for the Knicks. Defense isn’t his best suit, but Thibodeau makes everybody better, as evidenced by his work with Bullock and vaulting New York from a poor defense to one of the best defensive teams in the league.

Powell is also seeking over $20 million annually, per ESPN’s Zach Lowe. That’s more than I’d want to spend on him, but if they miss out on one of the above names and/or lose Bullock, Powell could become an elite sixth man or third-option starter.

Brunson’s dad, Rick, played under Thibodeau with the Knicks in the late 1990s, and he served as an assistant under Thibs in Minnesota.

“I am fond of Rick Brunson—his son is a terrific player and having a helluva year,’’ Thibodeau said earlier this season, via the New York Post. “I’m happy for him, watched him grow up. I remember him when he was coming to the Garden to watch Allan Houston and [Latrell] Sprewell play. He was six years old and mimicked their moves. He’s become a darn good player and become a great kid too.’’

As an accomplished Veteran Point Guard, Conley fits a similar mold as Paul and Lowry.

However, he doesn’t hold the same appeal. Constantly viewed as one of the more underrated players in the league, Lowry runs the show in Utah, averaging 16.4 points, 6.0 assists, and 3.4 rebounds for the second seed Utah Jazz team. Still, Lowry doesn’t bring the defensive impact or two-way physicality of Paul and Lowry, while his price tag could be in the same ballpark as his contemporaries.

The 33-year-old is a valuable locker room piece and a 40% shooter who I’d happily take on the Knicks. I’d prefer a few other options from this free agent class.

I understand both sides of the DeRozan argument for the Knicks.

DeRozan doesn’t fill a particular position of need and will likely command a lot of money at 32, coming off another under-the-radar strong season in San Antonio. The case for DeRozan: he’s genuinely improved as a playmaker, as he’s putting up a career-best 7.3 dimes per game this season. Of course, signing him keeps him off other Eastern Conference contenders.

He’s still a quality scorer—21.7 points per game in 2020–21—but he hasn’t developed his three-point shot enough to fit alongside Barrett and Randle seamlessly. Plus, one of DeRozan’s best features is his bucket-getting in the clutch. Fortunately for the Knicks, they already have one of the best closers in the game in Barrett.

He can help anybody win games, but he’s a bit too redundant to justify what will likely be a steep price tag.

The New York Knicks have cap space and could add to their talented roster this offseason. Based on the top names in the class, the point guard position will be a position to watch as the Knicks have several, short-term options that can upgrade the roster, or, sign someone like Lonzo Ball to fortify the position for the long term. Whatever happens, this is the rare offseason where the Knicks sit with two talented players, several draft picks, and cap space to build. They cannot pass up the chance to improve moving forward.