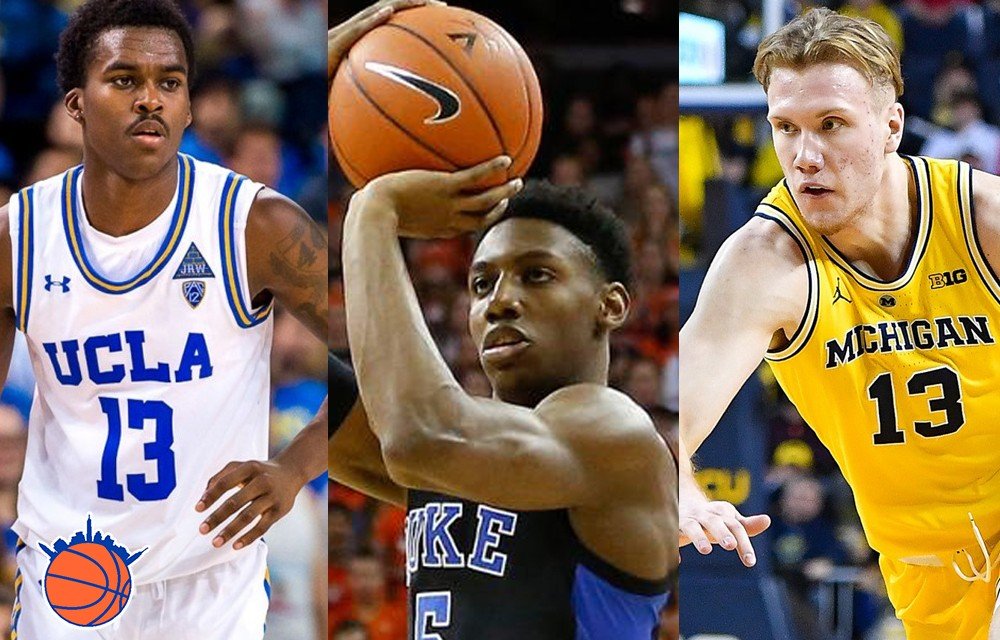 The 2019 NBA Draft is in the books. It was a culmination of a long nine months, and a kickoff to a summer that can alter the trajectory of the franchise significantly. GM Scott Perry and the scouting department had some high expectations to live up to.

In last year’s draft, Perry managed to find guys who genuinely like each other. That chemistry has strengthened over the past 12 months as Mitchell Robinson, Kevin Knox, and Allonzo Trier begin to take on larger roles within the team.

Perry doubled down on chemistry in 2019, going back to the well that has yielded success in the past.

Here’s how Perry and the Knicks’ selections, plus undrafted signees, graded out.

R.J. has been covered ad nauseam. He was on the Knicks’ radar well before anyone knew Kristaps Porzingis would be gone or the team would fall to third in the draft.

Barrett is a gamer in every sense of the term, and his personality on and off the court fits New York like a pair of Yeezy 350s. The key takeaway from the pick here was that, for the first time this century, Knicks fans did not boo⁠—and that crybaby kid was nowhere to be seen.

As Barrett embraced New York with open arms, New York returned the favor and then some.

It was the first great Knicks draft moment in a long time. Now comes the tough part for Barrett—proving he was worth the pick. His work ethic is unrivaled, and he brings a positive, “give it your all” attitude.

In the introductory presser, David Fizdale and Steve Mills touched on R.J.’s character, calling Barrett the guy they want to add to the culture they are trying to build. Barrett spent two and a half days with Mills and Perry, even watching the NBA Finals at Mills’ apartment.

Fizdale had a great anecdote: they had an early meeting with R.J. in Chicago, and the 19-year-old showed up in a suit and tie. One constant with this regime is building a championship culture. Barrett has won at every level, and has had a professional mentality for quite some time.

That’s everything you want, if you’re a team with three winning seasons since 2000.

Steve Mills and Scott Perry did not expect Ignas Brazdeikis to reach the second round. Their analytics team graded Iggy Braz—his name from this day until his last—as a rotational player. With the chance to land that type of talent late in the second round, they did not hesitate. The cost for moving up to get Iggy was minimal—the 55th pick, Virginia’s Kyle Guy, and cash.

Iggy had a good season at Michigan, averaging 14.8 points per game and shot 39.2% from deep.

He graded out well in key areas including spot-ups and cuts, two skills that will come in handy sharing the floor with the ball dominant Barrett.

Brazdeikis ranked in the 92nd percentile out of spot-ups, 84th out of PnR, 89th as a cutter. Versatile scoring wing, highly competitive.

Where this pick earns major points is chemistry. Iggy and R.J. have known each other since they were eight years old, and played on Team Canada together. Having a familiar face from the jump will ease the transition periods for both players.

Mills saw the effect familiarity could have with Porzingis and Willy Hernangómez a few years back. Barrett and Brazdeikis could have similar success at the Summer League and beyond.

Finally, the personality. Barrett is not the only guy who will fit into the New York culture well. Iggy will become a Garden favorite quickly, and might be Mario Hezonja’s best friend if Mario sticks around thanks to his bravado.

The word on Iggy Braz is that he likes to talk smack, a staple of New York basketball. Tweets like this only back that sentiment up.

Recognize a real Don when you see one pic.twitter.com/91Ykq9BOVO

Could lightning strike twice for Perry? Stop me when you have heard this before: The Knicks sign a confident Pac-12 player to a two-way contract immediately after the draft.

Wilkes reportedly did not want to be selected in the second round, preferring to play his way into an NBA deal as Iso Zo did last year.

He has some serious talent. Wilkes arrived at UCLA as a former Indiana Mr. Basketball. For the Bruins he started out strong. As a freshman he averaged 13.7 points and 4.9 rebounds per game, shot 44.1% from the floor and 35.2% from three. He also made the Pac-12 All Freshman Team.

He did not take a step forward as a sophomore, despite increasing his points per game average to 17.4. His field goal and three-point percentage dipped, although his free throw percentage saw a minor uptick from 65.5% as a freshman to 67.1.

Wilkes’ sole highlight at UCLA was his game winner versus Notre Dame.

The key difference between Wilkes and Trier is that Trier had a strong career at Arizona. Wilkes did not play to expectations at UCLA, but there is some serious talent to tap into. He was a 6-foot-8 guard in college, which shows how versatile he could be on the wing at the next level.

If Wilkes impresses in Vegas, the Knicks can add yet another intriguing piece to the bench mob while adding depth to a team that needs all the talent it can get its hands on.

The Knicks have had a nice track record with HBCU players, as The Knicks Wall’s Reid Goldsmith mentioned. Can Amir Hinton join Anthony Mason, Willis Reed, and Kyle O’Quinn? If you listen to the chatter around Hinton, the answer may be a resounding yes.

Hinton is a high character guy who told ESPN’s Jonthan Givony that scouts told him he was a top three guard in this class. Hinton’s coach at Shaw University, Joel Hopkins, went as far as to throw in a Dwyane Wade comparison.

“His mid-range game is so efficient. As a slasher and a scorer. His game is exactly like Dwyane Wade’s coming out of college.” Some serious athleticism pops off the screen in Hinton’s limited game tape—although Wade may be an ambitious comparison.

"His game is exactly like Dwyane Wade coming out of college."

Amir Hinton could be the first D-II player drafted since 2005 ? pic.twitter.com/JFzPePbxIt

In his last season at Shaw University, Hinton averaged 29.4 points, 4.9 rebounds, 4.0 assists, and 2.3 steals per game, and shot 48.9% from the field and 34% from three. He is a big guard at 6-foot-5 who can obviously get buckets, and could possibly develop into a bucket-getter off the bench.

His mindset looks to be in the right place to earn that two-way deal. “There’s a chip on my shoulder. You get overlooked if you’re not a big recruit. I’m taking that mindset into every workout, every game,” he told Bleacher Report’s Matthew Foley.

It’s a minuscule sample size, but if Hinton brings that type of energy, Perry may have added another high character young guy.

There is not much to say about V.J. King. He is the least exciting of the 2019 class, and will most likely spend time at Westchester if he hangs around. There is not much King does well. In his three seasons at Louisville, King finished with career averages of 6.1 points, 2.8 rebounds, 0.7 assists, and shot 40% from the field and 29.7% from three.

If King ends up being good⁠—that’s great. Chances are he will play for the Summer League team and maybe get some burn up in Westchester, and that will be it. Going after a talent with injury concerns (Jontay Porter from Missouri) would have been a better move.