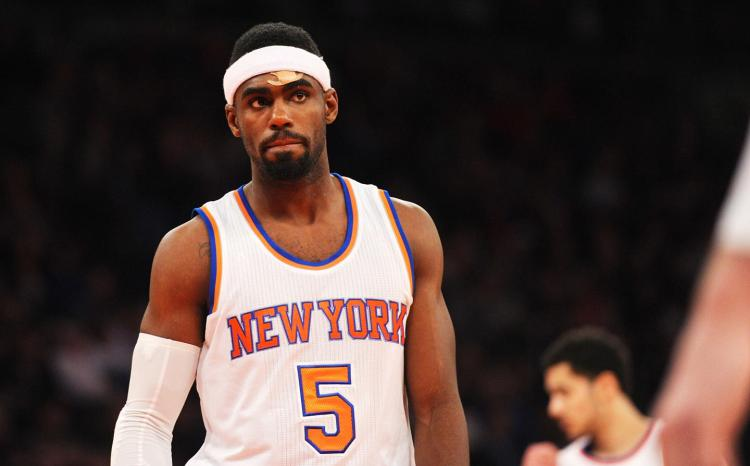 Knicks fans are still trying to forget the last version of Hardaway, Jr., in a Knick uniform, but this season has the potential to be a different story.

It’s a baffling re-acquisition, even for the Knicks, a franchise with a frustrating fetish for the classic shock-and-awe-free-agency-overpay. The Knicks drafted Hardaway, Jr., with the 24th pick in 2013, traded him to the Atlanta Hawks in 2015 for Jerian Grant, who after one season was traded to the Chicago Bulls in the Derrick Rose deal last summer.

As the dust from the failed Derrick Rose experiment settled this summer, the Knicks had some money to spend, and as we’ve seen so many times with the Knicks, money that can be spent simply must be spent. So, of course, they chose the player that they believed two years ago was not very good was actually very, very good and gave him a $71(!) million four-year contract. The basic response around the NBA was one of general bafflement and Mike-Woodson-face levels of vacant incomprehension. Followed by laughter. Followed by knowing shrugs that said, “It’s the Knicks, what did you expect?”.

The organizational asset mismanagement underpinning the THJ saga is a rabbit-hole for another day. Today is for figuring out exactly what Knick fans can expect from Hardaway on the court this season. How much of 2014–15, 22-year-old sophomore season, Hardaway, Jr., is still there? The inefficient, volume shooting, defensive sieve who shot just 39 percent from the field with a 23.8 percent usage rate, whilst finishing 66th out of 69 qualifying shooting guards in defensive RPM with a -3.39 (per ESPN.com).

THJ has definitely improved since then–somewhere between slightly and significantly. Last season with the Hawks, he shot 46 percent from the field with a 22.5 percent usage rate, whilst finishing 56th out of 94 qualifying shooting guards in defensive RPM at -1.08. Context, however, plays an important role in this supposedly linear statistical improvement over the course of the last three seasons.

The player New York gets this season will be somewhere in between 2014–15 Knicks-Kindergarten THJ and 2016–17 Hawks University THJ. The difference between those two NBA environments is immense, and so deducing anything substantial from the statistics is dangerous.

Conversely, last season the Hawks won 43 games, led by an established coach in Mike Budenholzer. They had the 4th best defense in the NBA. Given this contextual divide, we should take both Hardaway’s ineptitude in New York and subsequent improvement in Atlanta with a pinch of salt–his true ability likely lies somewhere in the middle.

In projecting Hardaway’s production for the upcoming season, perhaps the most useful, and encouraging, team context to look at is head coach Jeff Hornacek’s two full seasons at the helm of the Phoenix Suns in 2013–14 and 2014–15. Now that Hornacek is freed from the shackles of Phil Jackson and his pet Triangle Offense, hopefully, Hornacek will revert to the offensive style that he had success with before: playing with pace, in transition, and shooting lots of three-pointers. Basically the anti-triangle!

Offensively, Hardaway’s strengths are his shooting and his ability to score in transition. Last season he was an excellent spot-up shooter, in catch-and-shoot situations he generated 1.15 points per possession on an efficient effective field goal percentage of 57.6, finishing in the 85th percentile on spot-up looks league-wide. THJ was also 17th in fast break points scored in the entire league with 237 (per NBA.com). This is especially impressive given that Atlanta as a team didn’t emphasize getting out in transition, with 12.1 fast break points per game, good for 19th in the league.

These offensive strengths dovetail nicely with Hornacek’s up-tempo Suns teams. In his two full seasons in Phoenix, the Suns finished 8th and 3rd, respectively, in pace, 3rd and 10th in three-pointers attempted per game, 8th and 7th in opponents turnovers per game, and 1st and 3rd in fast break points per game. All indications are that this seasons Knicks will play fast, shoot threes, and look to score on the break. Hardaway, Jr., can flourish in this style. He’ll get plenty of shots, and a license to get out and run.

While it looks likely Timmy will get plenty of buckets this season, playing up to his $71 million price tag will involve much more than scoring. In order to give the Knicks the value that comes with his mammoth contract, he’ll need to improve his defense and his playmaking. These are the two areas that will be fascinating to track as the season goes on, the real fulcrums of fortune on which Hardaway’s second stint in New York will hinge.

THJ is not a natural playmaker, but he did improve drastically as a pick-and-roll ball handler during his time in Atlanta. In 2015–16, he ran just 26 PnR’s, generating a pretty grim .54 points per such possession, which put him in the 9th percentile of efficiency league-wide. Definitely not a natural there. Given this starting point, his improvement as the PnR ball handler last season is extremely encouraging for the Knicks.

In 2016–17 Hardaway, Jr., ran 211 pick-and-rolls, generating a respectable .82 points per possession, lifting him into the 59th percentile (per Synergy). This is a huge increase in both volume and efficiency, and a welcome indication that THJ’s playmaking ability is not a stagnant weakness but a developing strength. With more reps, hopefully, the new (old) ‘Bocker can get comfortable making plays out of the pick-and-roll, something coach Hornacek will surely ask him to do, given the lack of natural creators on the roster.

Defense, as is often the case with young and offensively inclined players, is Hardaway’s big Achilles’ heel. Hopefully, after two years in Atlanta in an elite defense, he’s ready to accept the challenge on the side of the floor that will likely be the difference between the 25-year-old being good or being great. For THJ it’s all between the ears, all mental discipline because he has the athleticism to be a solid defender, he just has to show a willingness and ability to concentrate and consistently lock-in.

Hardaway, Jr., may have graduated from Hawks U, and landed a big contract, but to earn it he’ll have to become an all-around player. Points are not going to be a problem this season in an offense that will accentuate his scoring strengths, and rely on him as a second option behind Kristaps Porzingis.

The big question marks in Hardaway’s New York redemption story are his development defensively, and his abilities as a playmaker. Dwyane Wade, after working out with his fellow shooting guard this offseason, seems to believe in the new and improved THJ. While I’m skeptical of a complete metamorphosis, continued improvement in these key areas would make for a successful first season back in the Big Apple for the $71 million man.

Debating the Future of the Knicks, Direction of New York’s Franchise