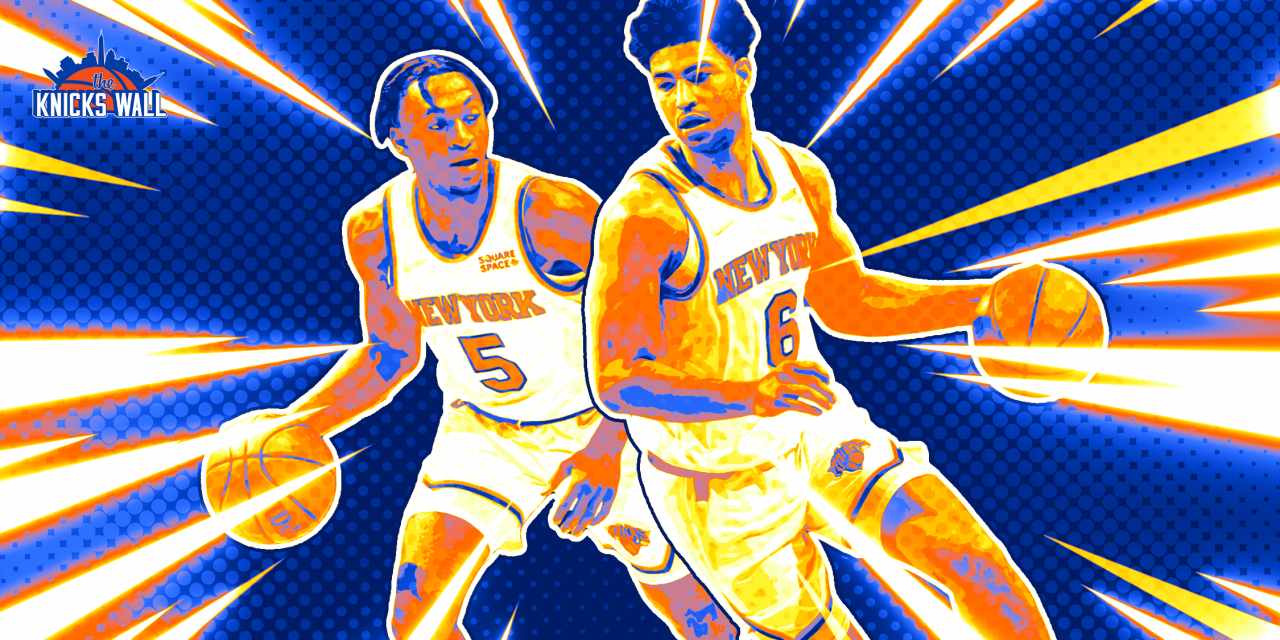 Immanuel Quickley and Quentin Grimes have both seen their names come up in trade talks, but which of the precious neophytes is most coveted?

For what feels like the first time in ages, the New York Knicks are replete with trade assets. Specifically, two forms of them. First, there’s the treasure trove of future draft choices at New York’s disposal. The Knicks have 13 picks over the next three drafts — seven are first-round choices (counting their own).

The four first-rounders from opposing teams have protections, which means they aren’t likely to be anything better than mid-round selections. Still, averaging 2.33 first-round picks per draft until 2025, the Knicks are in a prime position to chase a star via trade both now and in the foreseeable future.

When looking at the Knicks’ prospects at the guard spots specifically, Quickley and Grimes stand out as the cream of the crop. But which player has more trade value at the moment? Is it the playmaking speedster Quickley? Or is it the sharpshooting Grimes? Let’s try to get to the bottom of who’s the superior trade chip by comparing the youngsters’ NBA production in two key facets of the game.

Quickley and Grimes are two of the top long-range threats on the Knicks, and interestingly, how the two get buckets from this distance varies greatly. For the former, it’s about his creation ability from deep, which is unparalleled by any other player on the roster. A whopping 47% of Quickley’s total three-point makes last year went unassisted by a teammate (95th percentile in assisted rate, per Cleaning the Glass).

Grimes doesn’t possess nearly the creation chops beyond the arc that Quickley does, though the neophyte posted the far superior spot-up three-point percentage in 2021-22. Quickley mustered just a 32.4% clip on catch-and-shoot threes, significantly lower than his pull-up percentage (35.1%). Meanwhile, Grimes was nearly automatic on his deep catch-and-shoot attempts, as 41.2% found nylon. It’s also worth noting that Grimes took nearly double the amount of catch-and-shoot threes per game than Quickley (3.2 compared to 1.7).

As to which of Grimes and Quickley is the finer three-point shooter, it’s a near-tossup. Do you need someone who can dance with defenders off the dribble and pull up from deep? Quickley is your guy. Do you need an uber-accurate spot-up threat? Grimes is your guy. There’s no correct answer to who’s the better perimeter player; it just depends on what you value more in a three-point shooter: great efficiency or decent efficiency with self-creation ability. But because Grimes broke the Knicks rookie three-point record for makes in a single game with seven against Milwaukee back in December, I’m giving him the very, very slight edge here.

Winner: Grimes by a hair

Unlike the three-point shooting section, this one has a clear-cut winner, and it’s Grimes. That’s not to say Quickley is a defensive liability. But there’s no contest between the two regarding who’s better at getting stops.

Grimes staked his claim as perhaps the Knicks’ best perimeter defender since the minute he stepped foot on an NBA court. His point-of-attack defense is what makes him pop on this end — he expertly anticipates and navigates screens to stay in front of his man on the perimeter.

Another element of Grimes’ defensive chops is his active hands, which he uses to come up with steals (81st percentile in steal percentage). He is a consistent threat to generate steals thanks to his penchant for picking opponents’ pockets off the dribble and reading passing lanes.

Grimes’ hands also come in handy (pun intended) when he’s effectively contesting outside shooters on the perimeter. He closes out to three-point snipers in a manner that people in NBA circles call “hard and high.” This means Grimes sprints to them with his arms extended and simultaneously leaps in the air to harry their vision. Philadelphia 76ers coach Doc Rivers is famous for instructing his players to defend the line this way.

Quickley lacks the defensive IQ and size (Grimes is 6’5″ and Quickley 6’3″) to belong in the same conversation as Grimes. Quickley exerts effort, but that sums up his impact as a defender. He’s an average one at best. Grimes, meanwhile, is on track to receive consideration for some All-Defensive teams in the coming years.

At this juncture, Grimes is the more coveted trade piece. Not by a country mile, as Quickley is the more productive playmaker for himself and others. But Grimes fits the coveted 3-and-D mold to a tee, while Quickley only checks the first box.

Grimes’ offensive skill set also makes him a seamless fit for almost any team. He isn’t likely to disrupt a pecking order as a low-usage catch-and-shoot threat. Quickley, on the other hand, needs the ball in his hands to be most effective, which could negatively affect the number of touches and shots players receive.

While Grimes takes the cake, Quickley and Grimes are each valuable trade pieces that can fetch sizable returns in their own right. Still, here’s to hoping they remain Knicks for the foreseeable future and aren’t trade casualties in a Donovan Mitchell deal.

"They have a lot of the same qualities and mindset that I kind of had when I was a rookie… they work really hard. They'll be really good in this league." pic.twitter.com/GpyyJJeiA7

»Read: What can we learn from Summer League?

»Read: Why RJ Barrett will thrive next to Jalen Brunson