A Guideline for Frank Ntilikina to Keep His Minutes 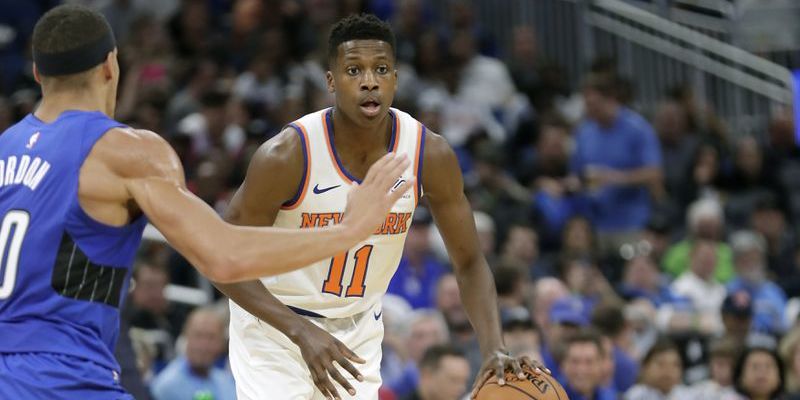 Frank Ntilikina has an increased workload due to New York’s sidelined point guards. How can in make the most of his newfound opportunity?

Frank Ntilikina supporters have gotten their wish. Out of necessity, David Fizdale finally had to play the third-year guard major minutes at his native position, point guard.

With Elfrid Payton dealing with a hamstring injury, and Dennis Smith Jr. out on bereavement, the window of opportunity is once again open for Ntilikina to prove he is worth playing at the position he was drafted to play.

Ntilikina got his first crack in Orlando against a defensive-minded Magic squad. Although Fizdale opted to bring him off the bench—out of fear of early foul trouble—he managed to see a season-high 29 minutes.

In those 29 minutes he tallied seven points, four assists, and four rebounds. It was a solid performance, and one in which he proved he can give his coach what he needed.

Fizdale says he has a target of 300 passes per game. Against the Magic the Knicks had 326, per NorthJersey’s Chris Iseman, the highest total from their first five games. Ntilikina also finished a +2 on the night, best out of anyone on the team who logged more than 10 minutes of court time.

Thursday, Fizdale announced that R.J. Barrett and Wayne Ellington will be the starting backcourt once again. Barrett at point guard has not worked out great. It’s a cheap knockoff of what the Rockets did with James Harden at point guard, surrounding him with shooters and a rim protector.

The problem could be that Julius Randle and Marcus Morris aren’t sharpshooters. The bigger, more obvious problem is that Barrett is not a fraction of the scoring supernova Harden is. Barrett is more than capable of being a playmaker, as The Knicks Wall’s Zach Locascio detailed, but the offense has stagnated when Barrett has been shifted to point guard.

Major minutes will continue to come Ntilikina’s way in the interim because of this. Eventually Fizdale will relent and realize that for his rookie to be at his best he needs to share the floor with a capable facilitator.

Payton has earned the right to continue to start when healthy, but Ntilikina still has the opportunity to keep the minutes he has seen over the last two games. Here is what the French Prince must do.

You don’t have to be Jimmy McNulty piece together that the Knicks are better when the ball is moving.

Payton did a good job of this, and Ntilikina has done the same. Even the staunchest Frank doubters have to admit: the ball is moving when he’s on the floor. His lack of trust in his own offense may be a curse for him, but it is a gift for his teammates.

Bobby knocks down the triple off of the Frank dime! pic.twitter.com/ZK1bSvsHO4

As stated early, the Knicks had 326 passes against the Magic, the most they’ve had this season. It’s no coincidence that was also the game Ntilikina played the most minutes at point guard. Barrett in particular said he loved playing with the Frenchman in their first extended run together.

Barrett credited Ntilikina’s defensive intensity, but the Canadian also mentioned that “he gets us organized” on offense.

It sounds like a menial task, but it’s a vital one. The Knicks have a lot of guys who want to score, especially in the starting lineup. Having one guy looking for everyone else’s shot makes life easier.

This is no surprise. Defense has been Ntilikina’s sole ability that is universally understood. Why his defense is important should be pretty straightforward: it frees up Barrett to not have to take on the toughest defensive assignment, and keeps the lineup free to switch on anything.

One of my favorite Frank plays from yesterday. pic.twitter.com/zcf5fZvPye

Not only does Ntilikina stop the fast break, he defends two guys, forcing the miss. He was great on the defensive end all night—for a better look, check out the full TKW breakdown.

To have Frank up top and Mitchell Robinson down low frees up Barrett and Randle, two guys Fizdale sees as playmakers, to grab the rebound and go.

The final piece to his game remains offense. Ntilikina moves the ball fine, keeps his head up, and generally has a good feel for the game. His struggles come when he has to get his own shot.

He came out firing in his first run of the night.

The pull-up jumper seems to be the shot Frank is most comfortable shooting right now, especially by the free throw line.

Something about watching Frank play basketball is just beautiful pic.twitter.com/GoPbIx26MK

Ntilikina can add some serious value without overhauling his shot selection by hitting more shots from the corners. He shot 39% from the corner as a rookie and an icy 28% last season, per Cleaning The Glass. Interestingly, he attempted exactly 24 corner threes each season.

If he can pump those attempts up, and start hitting at a decent enough clip to be a threat, he can help open up space for drivers.

On this play, for example, if Ntilikina’s defender collapses on the driver he has a wide open shot.

I feel like I say this every game but RJ is strong as hell pic.twitter.com/B9CXccv5eC

Those opportunities will be plentiful the more time he spends with Barrett and Randle. Ntilikina has to be ready, willing, and above all confident. After hitting a couple early shots in Orlando, he still only attempted eight shots, and his aggressiveness tapered off.

His unselfishness is an asset, but it’s clear Fizdale would like whoever he has at point guard be able to score too.

The good news is that Ntilikina is finally playing a decent amount—it’s just a question of for how long. The question as to whether he deserves a big role on this team has been covered ad nauseam. I have personally written so much about Frank I can type “Ntilikina” blindfolded.

Right now Frank has a chance to prove to the doubters, supporters, and people on the fence what he can be. The role is clear—it’s just a matter of what he does with the window of opportunity he has.

»READ: Could R.J. Barrett be the answer at point guard?