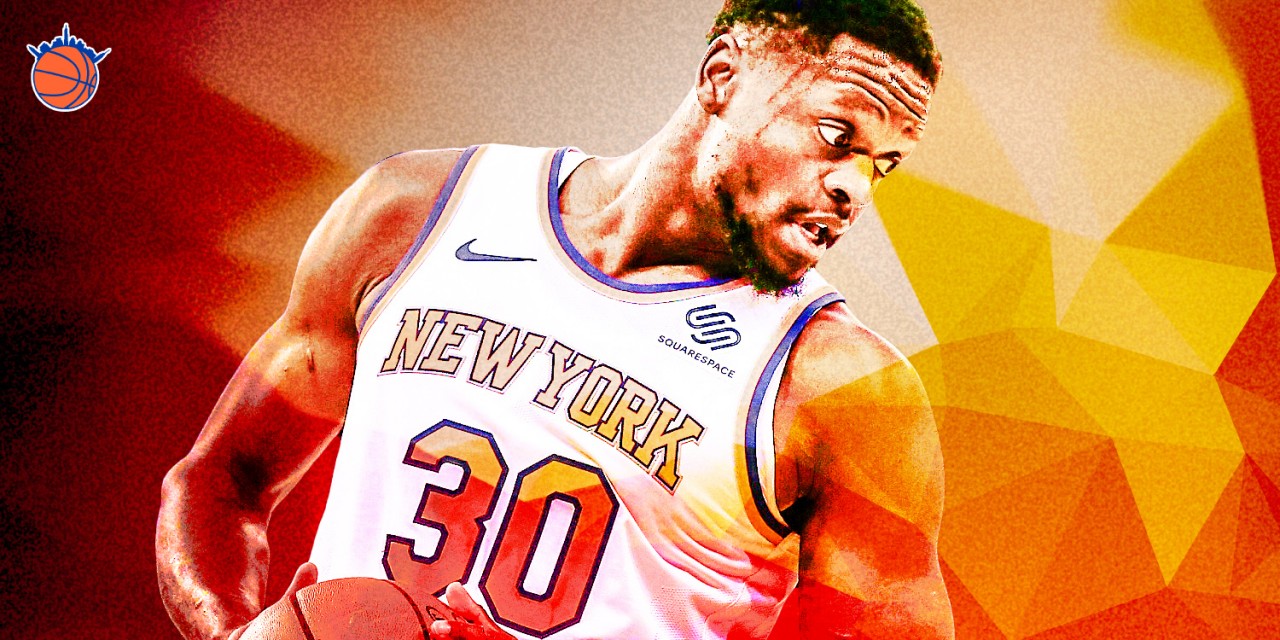 Julius Randle was the only player the Knicks signed past next season in the summer. What if he’s one of their better trade chips now?

If there’s anything more nauseating than the Knicks’ record, it’s the amount of “power forward” jokes that are made at the team’s expense. Of course, this is not without merit—on paper, four of their major acquisitions play the position to some degree. Taj Gibson, a traditional power forward in every sense of the word, is currently the Knicks’ starting (and, frankly, undersized) center. Julius Randle, unequivocally their biggest free-agent acquisition in the offseason, is a true power forward with the ability to play the five in a small ball lineup. Marcus Morris, who’s been far and away their most consistent shooter and overall player, is currently entrenched as the starting three man.

But Morris played primarily at the four in Boston, and he saw a lot of success—particularly on the defensive end of the court. And of course, there’s Bobby Portis, a backup four and five man who literally can’t guard either position. That’s an argument for another day. Second-year man Kevin Knox would also likely benefit from playing some more stretch four, as his feet oftentimes look like they’re immersed in quicksand every time he takes a lateral step on the perimeter.

So, yeah, there’s still a logjam at the four, despite some of the Knicks’ roster fluidity.

Despite a mismatched roster, Randle in particular has shown glimpses of being the promising 25-and-under player the Knicks envisioned when they signed him to what was basically the only semi-longterm deal after getting spurned by the two Nets-Who-Must-Not-Be-Named. Averaging 19.0 points, 9.3 boards, and 3.3 assists on just under 45% shooting is certainly respectable, but they don’t tell the whole story. Randle is shooting an abysmal 27.8% from three on the season after knocking down a career-best 34.4% last year with the New Orleans Pelicans. He’s also one for his last 20, and most of those attempts basically scream “brick city” the second they’re released from his fingertips.

Randle is averaging a career-high in turnovers with three a game, although he’s been a bit better in that regard since Mike Miller took over as head coach (and promptly made a concerted effort to take the ball out of his hands). His Player Efficiency Rating (PER) is tied for 82nd in the league, and it’s clear some of his numbers are inflated by being on one of the worst teams in the league. His True Shooting percentage (TS%) is the worst it’s been in three years, sitting at 52.6%, which is well below the league average.

Randle’s struggles could certainly be attributed to the roster makeup. Due to a lack of spacing and complementary shooting, Randle is often either forced to jack up threes out of rhythm or drive to the rim with reckless abandon from beyond the arc. Teams can load up on Randle with ease—especially when he’s on the court with Mitchell Robinson and a non-shooting point guard in Elfrid Payton. In fact, this is likely the main reason why Gibson starts the game alongside Randle. It also probably correlates to Randle’s hot starts.

So, as the trade deadline approaches, the Knicks essentially have two options. The first option would be to trade Julius Randle outright. If they don’t see him as a longterm fit—which is totally justifiable at this point—they could opt to move him to a team better suited for his play style. The other option, of course, would be to trade some of the other players on the roster who either share the same position as Randle or appear to be a poor fit beside him (although, one could and should argue that these decisions should have been made last offseason, but I digress).

Still, let’s look at what the Knicks could do here.

It’s no secret that most of Randle’s success last year came when he didn’t share the floor with Anthony Davis. In fact, he was at his best as a small ball center, where he could blow past slower defenders and shoot relatively unguarded catch-and-shoot treys. Randle’s shot selection has really taken a dive on the Knicks, again due to poor spacing, poor shooting, and a role that simply doesn’t fit his skill set.

Ideally, Julius Randle could be a dynamic player off of the bench for a contending team. This doesn’t look like a possibility for the Knicks, who could hardly justify bringing their marquee free-agent signing off the pine following a 17-win season (and another one that will unlikely significantly pass that win threshold).

A role Randle would undoubtedly thrive in is one cut from the same cloth as Clippers bench star Montrezl Harrell. A Sixth Man of the Year candidate for the second year in a row (he was the runner-up to his own teammate, Lou Williams, last year), Harrell thrives off of the bench in pick-and-roll situations as a small ball five. He’s quick, strong, and has a great touch with both hands. Sound familiar? Well, that’s pretty much the former Laker to a T. Harrell doesn’t have an elite shooting touch, and although he will shoot his mid-ranger from time to time, he mostly lives around the rim. Of course, it also helps that he has an elite playmaking guard in the pick-and-roll in Lou Will.

21-8-3 last season. When he gets in a groove, he's a load to handle. Attacking smash-mouth style will make him a fan favorite. Small-ball with him at C and Kevin Knox at PF will be fun.

But that’s all the more reason to justify a Randle trade. The Knicks clearly lack the talent and shooting around Randle that’s been a luxury for Trez—even predating the Kawhi and PG pairing. Randle is even a hair bigger than Harrell—he’s listed at 6’8″ to Harrell’s 6’7″—so there’s no reason to believe he couldn’t thrive in a similar role/system. A team like the Thunder, who could offload Danilo Gallinari’s expiring contract and throw in a protected first-round pick, would make sense. They’d be getting a young player in Randle who fits their rebuilding-but-still-competitive timeline. He could step in at the four and shift down to the five in smaller lineups, and run pick-and-roll all days with CP3 and budding star Shai Gligeous-Alexander. Or you can even bring him off of the bench with Dennis Schröder à la Lou Will and Trez, giving the Thunder a solid one-two punch off of the bench.

Of course, there’s no telling if the Thunder would be willing to participate in such a swap, especially considering the success they’ve had this season, particularly with Nerlens Noel playing some of the best basketball of his career as the backup five. But they might be more inclined to do a swap that includes Mike Muscala, Andre Roberson, who has yet to play this season (or last, for that matter), their young forward, Darius Bazley, and a protected first-rounder. The Knicks could then buy out either one or both of Muscala and Roberson, leaving them with just the talented Bazley to add to their rebuild.

Even a team like the Miami Heat makes sense, at least to some degree. They could use another proven scorer off of the bench like Julius Randle, and he’d fit well alongside Goran Dragic—another offensively gifted point guard off of the bench—as well as some other plus shooters like Tyler Herro and Duncan Robinson. Ideally, the Knicks could trade Randle and perpetually out-of-the-rotation guard Allonzo Trier for Justice Winslow, who thrived at point guard for the Heat last season, and the expiring contract of Meyers Leonard. And maybe, just maybe, they could also squeeze a late future first or Miami’s 2022 second-rounder out of the deal too. But knowing the Knicks front office, this appears to be wishful thinking, at the very least.

Option B seems like the more realistic scenario, at least when you factor in the unmitigated hubris of the Knicks’ incumbent front office. Steve Mills and Scott Perry have hardly owned up to their disastrous offseason last year, and that doesn’t appear to change any time soon. Trading Randle halfway through his first season would poke holes in their argument that their roster has “underachieved.”

Still, Mills and Perry need to do something. Offloading some of their ill-fitting pieces on a one-year deal would probably be a happy medium for them, their fans, and their young, developing players. Ideally, it would be Portis and Gibson who would be traded to clear up the aforementioned logjam in the frontcourt.

There’s probably not a Knicks fan in the world who wouldn’t be exuberant if Bobby Portis was traded. He’s been an up-and-down performer for a New York team that, above all else, needs consistent performers. However, his floor-stretching ability and offensive prowess could be coveted by other teams in need of a scoring punch off of the bench.

Taj Gibson, with all his infinite wisdom and experience, could be another candidate to be traded to a contender, but his leadership skills could also help some of these young Knicks. If Gibson were to stay on the team, though, he’d have to do what DeAndre Jordan did last year—sit in favor of the youngsters. Having Gibson as a mentor/unofficial assistant coach would be great for the likes of Mitchell Robinson, Randle, Kenny Wooten, and Kevin Knox. Of course, it’s unclear if he’d embrace that role in the same way Jordan did. If he does, however, the Knicks could start Robinson and shift Randle to the five when he sits and bring Kevin Knox or Damyean Dotson off of the bench for a smaller lineup. This would also allow Wooten to get his first minutes as a backup big to eventually spell Randle.

Either way you look at it, the Knicks have to do something at the trade deadline. If they do see Julius Randle as part of their young core, they need to make the necessary adjustments to help him—and his fellow young non-shooters, Mitchell Robinson and R.J. Barrett—succeed. Shooting, roster fluidity, and role adjustments should all be prioritized at the trade deadline. Because it certainly wasn’t in the offseason.