So … Has Dennis Smith Jr. Played His Last Game as a Knick? 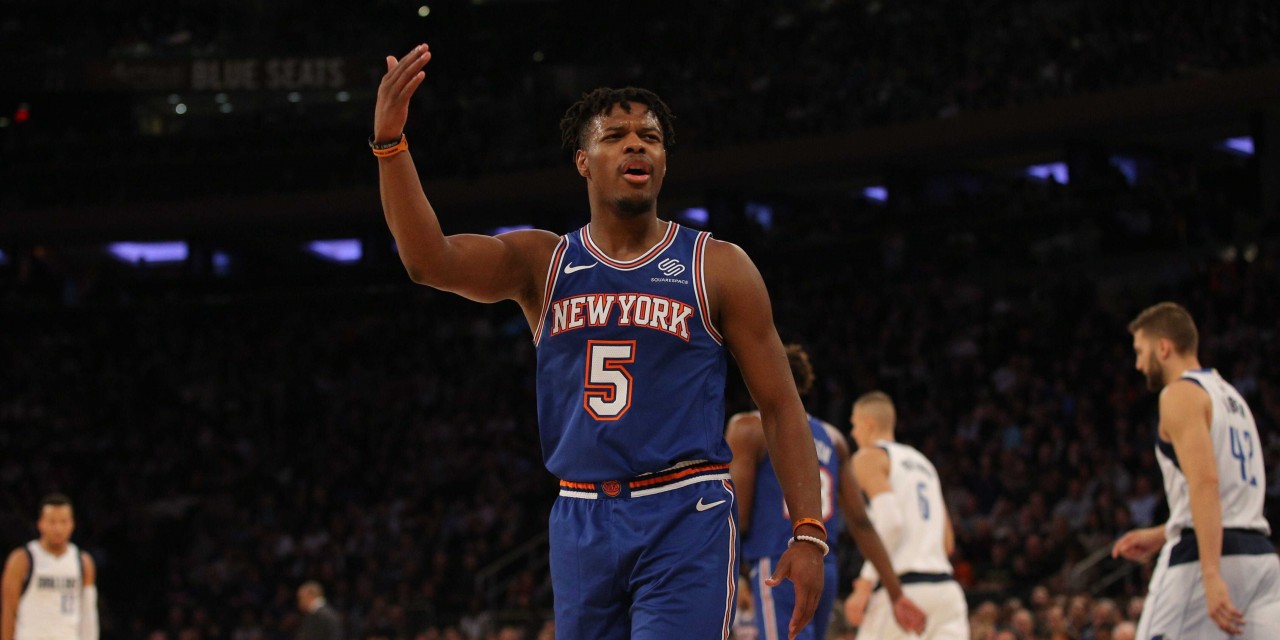 Dennis Smith Jr. is recovering from a nebulous injury with the trade deadline weeks away and at least one suitor emerging. You do the math.

Dennis Smith Jr. arrived in the Big Apple at a tenuous time. The New York Knicks had just traded All-Star power forward Kristaps Porzingis amid recovering from an ACL tear. The acquisition of Smith Jr. was comedic at the time given the back-and-forth between the NC State product and French guard Frank Ntilikina around the lead-up to the 2017 NBA Draft. The Knicks went with Ntilikina, and the Dallas Mavericks were ecstatic with Smith instead.

Nineteen months later Smith ended up a member of the Knicks anyway—alongside Ntilikina—and his initial tenure in New York was successful. He averaged 14.7 points and 5.4 assists per game the final, 21-game stretch with the Knicks in 2019, shooting 41.3% from the field and 28.9% from three. The talent was obviously there after he was excommunicated from Luka Doncic’s team and found a home in the point guard–starved east coast metropolis.

A tale of two 21-game samples for Dennis Smith Jr. in New York.

Does he play another game for the Knicks? pic.twitter.com/S3THuR4JZA

Smith has been sidelined for the Knicks since he last played on December 23rd against the Washington Wizards (6:57 of court time). He’s dealing with a mysterious oblique injury and has been traveling with the team and seen on the bench in his street clothes. Is the point guard going to suit up in orange and blue ever again?

The oblique strain also impacted New York Yankees slugger Aaron Judge for eight weeks. This time around for the ‘Bockers, all that we know is Smith is “making progress.”

Per the NorthJersey’s Chris Iseman:

If Smith is out another month, given Judge’s two-month absence and the original strain spanning since the third week of December, that would extend past the NBA’s February 6th trade deadline. Is Smith even going to be with the Knicks by then? There was chatter about the Minnesota Timberwolves having interest in the third-year point guard, among other teams, reported by SNY’s Ian Begley.

Between Smith’s injury and the forthcoming trade deadline, it’s not unthinkable to doubt whether the former Mavs guard will be on the court for New York much longer. In fact, we could have already seen him play his last game in his seven minutes of action against the Wizards last month.

The Timberwolves traded their veteran floor general Jeff Teague on Thursday to his ex-team Atlanta Hawks, providing rising star Trae Young a backup and a foundation. That leaves Minnesota without a point guard. That we know Minny has interest in Smith is just one indication that the Twin Cities franchise is searching for point guard depth. The only point guards on the Wolves’ roster right now are Shabazz Napier and two-way Jordan McLaughlin. Thus, whether it’s Smith or another guard, Minnesota needs to swing a deal and find a floor general next to Karl-Anthony Towns and Andrew Wiggins.

Smith played 42 games for the ‘Bockers, and his final 21-game stint in 2019 amounted to 5.2 points and 2.7 assists a contest in just 16.1 minutes per game, shooting 32.5% from the floor, 29.3% from deep, and 50.0% from the charity stripe. The Knicks have reportedly looked for tangible players in return for assets like Marcus Morris, and it would be tough to peg which player or players they’d be interested as a package for Dennis Smith Jr.

The bottom line is the injured yet recovering Smith has dropped off dramatically for New York. The window is wide open for Minnesota or others to pick him up, and for the Knicks to adjust accordingly developing another player or sticking with Ntilikina in the short term.