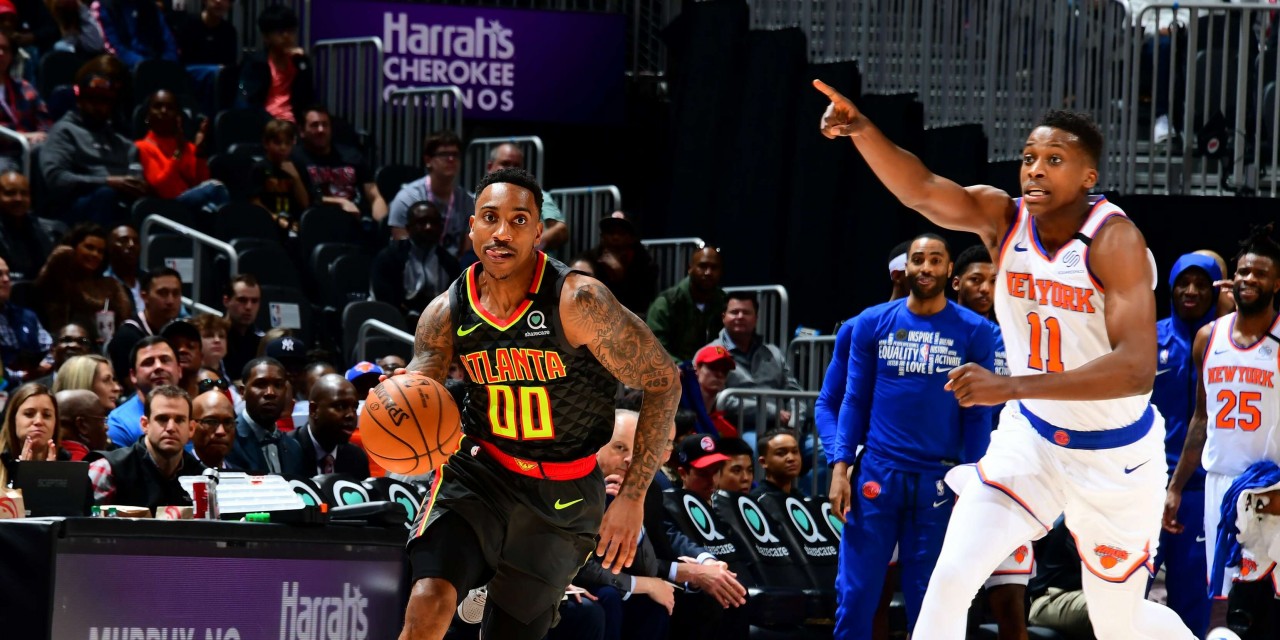 The Knicks had their fifth straight victory erased twice over in a double overtime defeat in Atlanta to the Hawks on Sunday.

The Knicks fell to the Atlanta Hawks 140-135 in double overtime, snapping a four-game winning streak, their longest since December 2017. New York (17-37) held an eight-point lead in the first overtime period but Atlanta (15-39) came out on top in the end.

New York owned the first quarter. Behind 12 points from Julius Randle and 11 from Reggie Bullock, New York went on a 19-4 run to take a double-digit lead. Randle converted on 6-of-10 shots and added eight rebounds, while Bullock shot 4-of-6 from the field and 3-for-5 on three-pointers.

The pass from Frankie omg pic.twitter.com/sExYRfV38B

The Knicks’ defense was also strong, contesting nearly every shot and forcing Atlanta to shoot more airballs from beyond the arc (three) than made triples (two). The Hawks shot 6-of-20 from the field in the opening period, giving New York a 31-20 lead.

The script flipped in the next quarter for the Knicks, however, as the Hawks scored 41 points and briefly regained the lead near the quarter’s end. John Collins, in particular, made a strong effort to bring Atlanta back, scoring 12 points in the first five minutes of the second period.

A deep trey from Trae Young gave Atlanta the lead with just over five minutes remaining in the first half but it was short-lived, as a two-handed slam from Elfrid Payton put New York back on top.

The Hawks regained the lead after Payton’s dunk but lost it again in the final minute of the quarter. New York went into halftime winning 63-61.

Atlanta jumped out to a five-point lead in just over two minutes, causing Knicks interim head coach Mike Miller to call a timeout. The Knicks weren’t able to draw much closer, as Kevin Huerter’s shooting and Young’s playmaking abilities pushed the Atlanta lead to double digits with 6:21 left in the third quarter.

New York’s offense fell flat. No one could get anything going and the team managed just 20 points the whole quarter. The Knicks’ defense slipped, too, as the Hawks recorded 33 points in the quarter en route to gaining an 11-point lead entering the final frame.

The Knicks finally secured a one-possession deficit with 2:42 remaining. A three-pointer from Bullock brought the score to 114-112 but Young soared straight to the hoop to push Atlanta’s lead back to four.

New York erased the four-point deficit on back-to-back possessions. Payton hit a rolling Robinson for a dunk and then Randle sunk two free throws to bring the game to 116 apiece with 30.3 seconds remaining. Neither team could break the tie, bringing the contest to overtime.

Payton kicked off overtime with a fast break bucket, giving New York their first lead since the beginning of the second half. After Collins evened the score, the Knicks scored eight straight points.

The Hawks responded by scoring six straight of their own, bringing New York’s lead to two points with 32.5 seconds left.

Out of a New York timeout, Payton traveled and then fouled Young on a layup attempt with 7.2 seconds left. Young swished both free throws and the Knicks couldn’t get a bucket, forcing another overtime.

The second overtime period began with an and-one dunk from Mitchell Robinson. The Knicks then fell apart defensively, as Young drew two more fouls on consecutive possessions, making all four free throws to give the Hawks a two-point advantage. Atlanta would push that advantage to seven with 2:12 left on the clock.

The Knicks made it a three-point game with less than a minute to go, but that was as good as they could do. The intentional fouling didn’t yield any misses. New York lost by five.

Julius Randle led the way for New York with 35 points and 18 rebounds on 13-of-25 shooting. Reggie Bullock recorded 21 points on 8-for-18 field goal shooting and 5-of-10 shooting from beyond the arc. Wayne Ellington also hit five triples, scoring 15 points on 5-for-9 shooting from deep.

Trae Young had a monstrous night, recording 48 points and 13 assists. John Collins tallied 32 points and 16 rebounds on 12-of-19 from the floor and rookie De’Andre Hunter recorded 19 points, nine rebounds, and five steals.

Punishing in the paint

The Knicks feasted from inside against Atlanta’s abysmal rim protection. Interior defense had been a glaring problem for the Hawks, prompting them to trade for Clint Capela of the Houston Rockets last Thursday.

Unfortunately for Atlanta, the ex-Rockets center was not in action tonight as he continues to recover from plantar fasciitis, and it resulted in New York converting in the paint constantly.

Mitchell Robinson had it his way inside, scoring 15 points on 7-of-8 from the field, many of which were second-chance points. He added 11 rebounds, three blocks, and three steals.

MITCHELL ROBINSON OH MY THAT IS MURDER pic.twitter.com/PBXxAq826O

Randle, in particular, attacked the rim ferociously; he took advantage of the slower centers matched up on him and got to his spots. He finished with a season-high 37 points and tied his season-high in rebounds with 18.

Mike Miller cited the Knicks defense as the key for their strong play as of late. Entering this game, the Knicks needed to continue their strong defense against Young, who dropped 42 points the last time he played them.

Young, an All-Star and starter in just his second season, ranks fourth in points per game and second in assists per game in the league. Slowing him down was of the utmost importance, but New York couldn’t get it done. Young scored 48 points on 13-of-30 from the field, 6-of-13 from behind the arc and 16-for-16 from the free-throw line.

Elfrid Payton matched up on Young to start and guarded him for most of the game.

What a pick pocket pic.twitter.com/sMmVlahB6f

Dennis Smith Jr. guarded Young when Payton sat in the second quarter. Smith had a tough time keeping up with Young in the pick-and-roll, allowing Young to separate and find open teammates.

Frank Ntilikina started matching up with Young in the third quarter. The Frenchman gave Young some trouble and Miller kept the matchup to start the fourth quarter.

Payton, though, was the one to close the game out. On Young’s first possession against Payton, he used a screen from Dewayne Dedmon to get into the paint and converted on an and-one floater (with Julius Randle committing the foul).

Young gave Payton some problems in overtime, getting to the rim easily and making every free throw he took. He scored six points in the first overtime period and 11 in the second.

New York is back in action Wednesday against the Washington Wizards—their last game before the All-Star break.