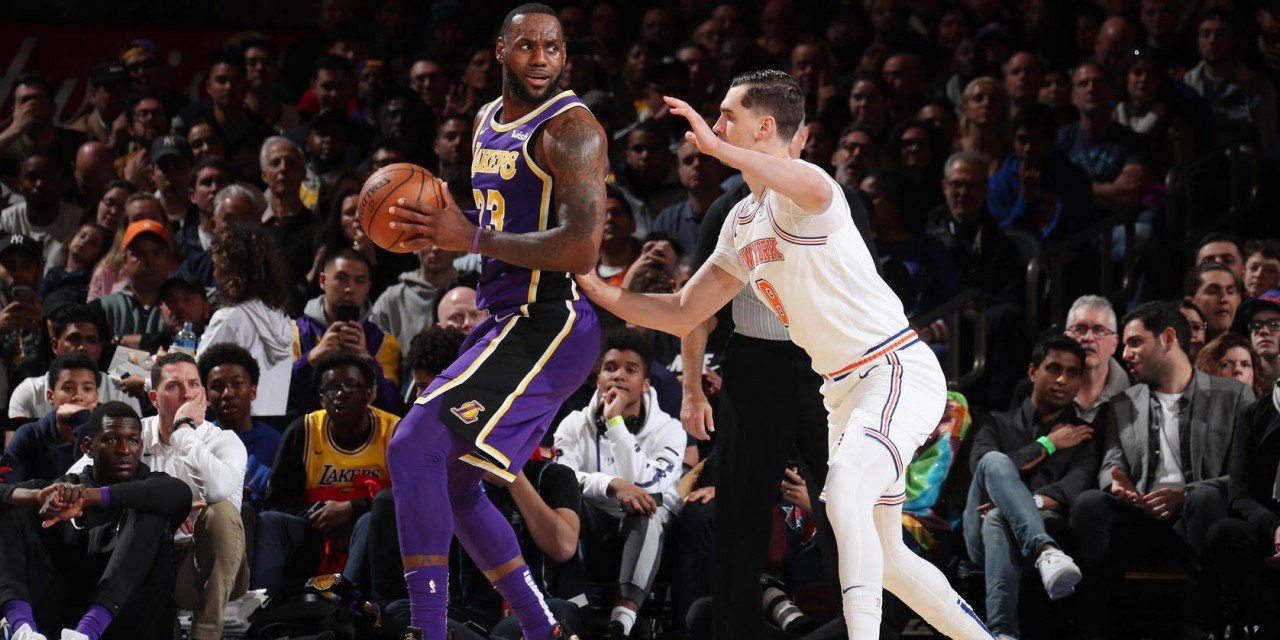 A comeback victory for the Knicks against the Lakers was punctuated by Mario Hezonja’s shocking block on LeBron James.

The New York Knicks (14-56) defeated LeBron James and the Los Angeles Lakers (31-39) on St. Patrick’s Day in a Garden matinee thriller, coming from behind to seal their first victory in nine games.

Here are Sunday afternoon’s takeaways from the Knicks’ W.

Kevin Knox and Damyean Dotson played well early on. Together, they combined for 26 points in the first quarter. This is what we’ve come to expect from Dotson, who has been efficient and consistent, and when he hasn’t been consistent he’s exceeded expectations.

The guy’s been great at scoring from all three levels. He’s finishes strong at the rim, stops and pops from midrange, and drains the catch-and-shoot threes you come to expect.

Knox was surprisingly on fire in the opening quarter. It was “vintage” Kevin Knox, hitting a three early on and continuing to kill it throughout the game. The last-second three ball to end the highest-scoring first quarter of the season was Knox announcing that his rookie campaign was more than a disappointing venture—it was a season of growth. Dot and Knox ended the game with a combined 46 points and six rebounds a piece. Both were tremendous in this Knicks victory.

Emmanuel Mudiay hasn’t been anyone’s favorite lately, but he came through for New York as their lead dipped in the second quarter. He shot 4-for-6 to stop the bleeding and keep the Lakers lead from getting out of hand. His three-point shooting was uncharacteristic of the former Nugget, but a welcomed addition to his game against LeBron’s toon squad. Mudiay’s scoring picked up toward the end of the game as he went 3-of-4 from three and 8-of-11 overall. He was a beast in transition and came in clutch.

Mud with his 24th point of the night, cuts the lead to 5 pic.twitter.com/dBgV7nWKbV

Knicks starting “point guard” DeAndre Jordan had himself a night, nearly achieving a triple-double yet again. He wasn’t much on defense, but he still managed to inhale a copious amount of rebounds while facilitating the offense. In his tenure as a Knick, he’s found the open man numerous times from the pinch post and high post. He’s not the Knicks’ point guard of the future, but he worked his ass off this afternoon for 15 points, 17 rebounds, and seven assists.

Super Mario, The King in the North

In his first game since coming back from injury, Mario Hezonja came through clutch. He mostly played a quiet game as his teammates took on the scoring load. He shot 4-of-8 with one made three-pointer and went 8-for-8 from the foul line. His big moment came in the stout defense he played against LeBron James in the final seconds of the game.

For some reason, I enjoy his version of “The Block” better.

Number of the night

23 Turnovers: Every Knicks player except Mitchell Robinson accrued a turnover. The pace of the game was sky high at times, so it stands to reason that they would get a little clumsy with the ball. If it amounts to wins and is lessened over time, errant passes can be lived with.

The Knicks ended their losing streak at the Garden and came up big, spoiling LeBron James’ St. Patrick’s Day. Nearly everyone contributed. Although the recent games have been awful, this end to the losing streak couldn’t have been any sweeter.

They pack their bags for a trip north of the border, facing off against the Toronto Raptors on Monday night.