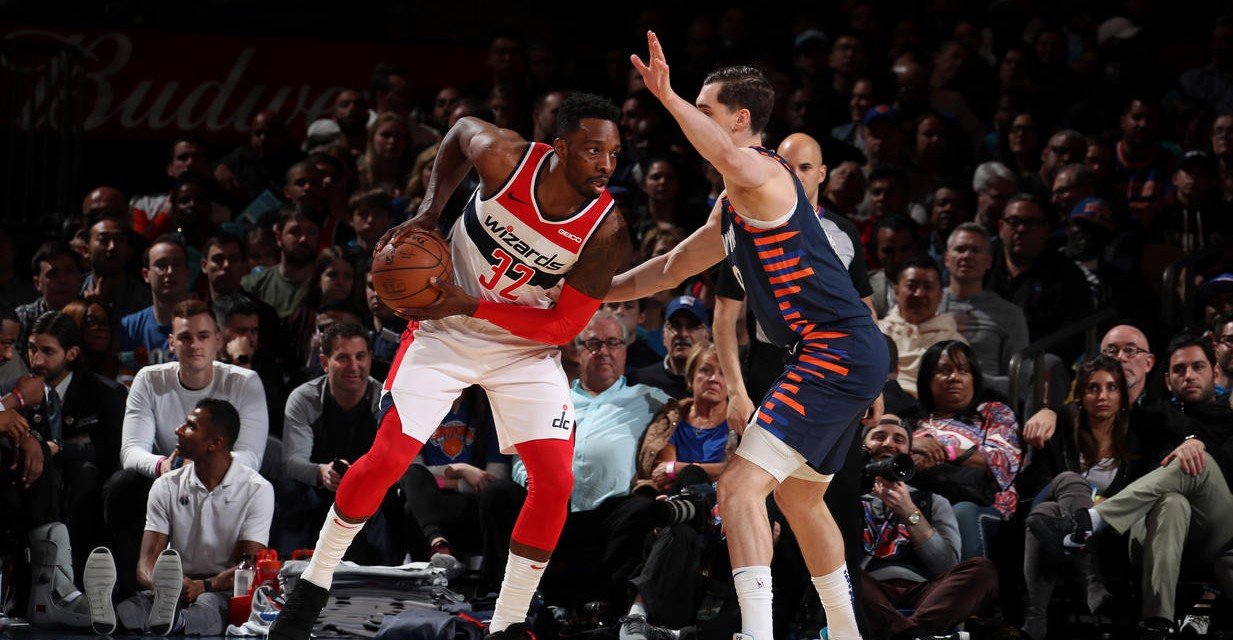 The Knicks had the knack from long range, as a strong shooting performance gave New York the edge over the Wizards in the final minutes.

The Knicks have already locked up the worst record in the NBA, but they aren’t going to roll over for the last few remaining games of the regular season.

New York (16-64) was able to prevent Washington (32-49) from completing the season series sweep, spoiling things in the final meeting between both teams this season. The Knicks rallied behind the heroic efforts of Mario Hezonja, who had himself a career-performance as the Knicks enjoyed a 113-110 victory on Sunday night.

Hezonja stayed hot, topping off a week of strong performances with a career-high 30-point game to lead the Knicks to victory. He also chipped in six rebounds and five assists. Hezonja was 12-of-21 overall, and 3-for-6 from long range. He drained a clutch three-pointer to give the Knicks a one-point lead with less than a minute to go in the game. Moments later, he also supplied a pair of free throws to help secure the win.

2019, the year of Mario Hezonja pic.twitter.com/zKSyyYpegS

It had been a closely contested game from the start, with neither team holding a double-digit lead, until Washington went on a 13-0 run sparked by a Tomas Satoransky dunk and finished by a Bobby Portis three-point shot.

The Wizards were trailing by one before going on a scoring spree, taking a 80-68 lead with 4:40 remaining in the third quarter. From there, it looked like Washington was going to be able to pull away and maintain its double digit lead.

However, in the fourth quarter, the Knicks regained their aim from long range. A series of three-pointers by Luke Kornet and Dennis Smith Jr. reenergized New York as the Knicks tool a 95-93 lead with 8:45 remaining in the game. The back-and-forth contest came down to the closing minutes of the showdown.

There were five lead changes in the final three minutes of the game, with Hezonja and Smith hitting some key shots to keep the Knicks in it, until the Knicks buckled down defensively and stopped the Wizards from scoring in the final minute of the game.

While Hezonja had himself a career-game, the rest of the Knicks were solid as well. Overall, it was a great shooting performance for the Knicks, especially from long range.

Aside from Mitchell Robinson, every New York player who received playing time hit at least one three-pointer. As a team, the Knicks shot 17-of-34 (50%) from beyond the arc, the third-highest number of three-balls converted in a single contest this season for New York, per Basketball-Reference.

Off the bench, Smith had 15 points and five assists. Henry Ellenson added 10 points and three rebounds.

For Washington, this was the Wizards’ first time playing the Knicks without John Wall, who suffered a season-ending injury. With Wall out, the Wizards saw huge contributions from players who were non-factors in the previous meetings with New York.

Jeff Green scored a combined 17 points in three previous games with the Knicks, but on Sunday night, he had a team-high 19 points. Big man Thomas Bryant was 7-for-11 on the floor and had 17 points. Bradley Beal struggled to find his shot and scored 13 points on just 5-of-17 shooting.

With the win, the Knicks improve to 16-64. They will need one more win to avoid setting a franchise mark for the worst record in team history. They’ll have two opportunities against the Chicago Bulls (Tuesday, 8 p.m. ET) and Detroit Pistons (Wednesday, 8 p.m. ET).