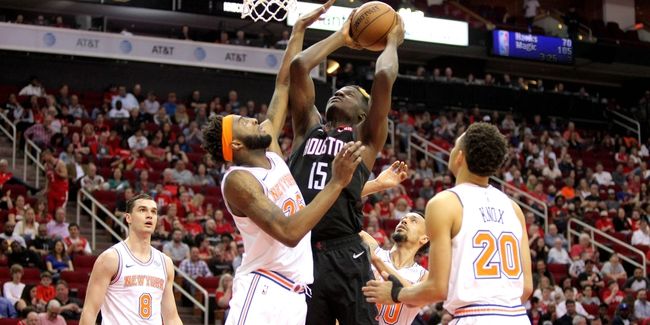 Despite a stellar performance from Mario Hezonja, the Rockets left the point guard-less Knicks in the dust in the season’s final Friday Night Knicks matchup.

It was always going to be an uphill battle for the Knicks—and that was before New York was set to play Mario Hezonja at point guard.

The mid-day scratch of Emmanuel Mudiay meant all four point guards on the roster were out, which didn’t help as the New York Knicks (15-64) were trounced by the Houston Rockets (52-28) by a final score of 120-96. The Knicks have all but clinched the worst record in the league, which comes with the best odds to land the number-one overall pick in the lottery.

There wasn’t much fight in this one, and to be fair, I don’t blame the Knicks one bit.

As most Knicks game are these days, the contest was out of hand in an instant. A couple back and forth possessions early in the first quarter and, before you knew it, the Rockets were up 16 at the end of the first. Houston’s offensive firepower didn’t seem locked in rather simplistic, beating the Knicks back down the floor to take advantage of mismatches.

The defense didn’t improve after the first quarter either. Houston’s trio of James Harden, Chris Paul, and Eric Gordon was able to space the floor, and that placed pressure on New York’s defense. An open floor allowed the likes of Clint Capela and Kenneth Faried to get easy looks at the rim. The combination of good three-point shooting and efficient bigs at the rim allowed the Rockets to score 72 points in the first half.

On the offensive side of the ball, the Knicks couldn’t put up much of a fight with a lack of outside shooting. New York finished with 6-of-27 shooting from beyond the arc, with Damyean Dotson finishing with 1-of-8 shooting from three. Going up against the Rockets, that’s an issue.

I’ll spare you the blow-by-blow in the second half, but I will say this: The Rockets emptied the bench, allowing the likes of Iman Shumpert, Austin Rivers, Danuel House, and Gerald Green to get some minutes. It was interesting, to say the least.

Starting at the lead guard, Hezonja finished with a triple double—16 points, 16 rebounds, and 11 assists in 42 minutes. Robinson finished with 12 points, nine rebounds, and three blocks, while Henry Ellenson came off the bench to add 16 points and seven rebounds.