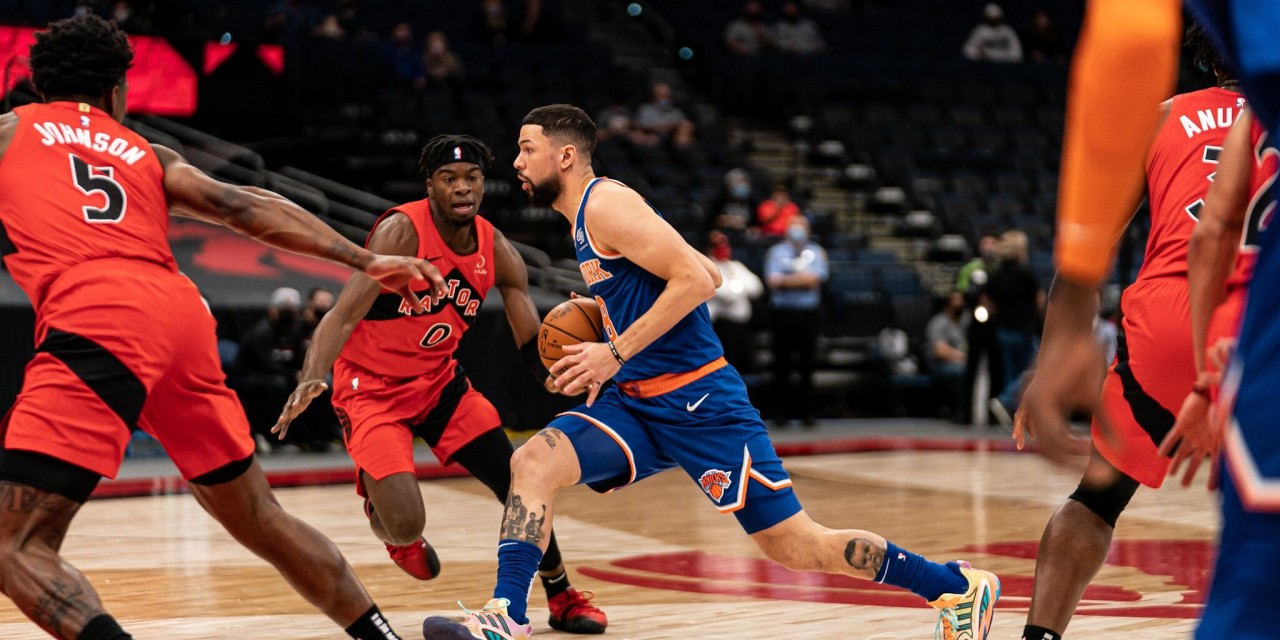 The Raptors earned a 100-83 victory over New York thanks to their backcourt play. Kyle Lowry and Fred VanVleet combined for 45 points.

The New York Knicks (2-3) faced off against the Toronto Raptors (1-3) Thursday with the hopes of extending their win streak to three games. After dropping their first two outings of the 2020–21 season, New York put together decisive back-to-back wins against the Milwaukee Bucks and Cleveland Cavaliers. New York’s opponent, the Raptors, have struggled out of the gate and held a poor 0-3 record before the New Year’s Eve faceoff.

New York struggled mightily to score the ball, particularly in the early going. The team mustered just four points by the midway point of the first quarter. Toronto’s frontcourt talents such as Aron Baynes and Chris Boucher did an excellent job of smothering the Knicks at the rim, which led to several point-blank misses for New York. Toronto trapped Julius Randle in the post throughout, but the perimeter talents of the Knicks were unable to capitalize on their open looks. Of the 35 threes that New York fired up, only three of them found the bottom of the net. Yes, you read that right, three.

That is the most misses without a make by a starting 5 all-time. pic.twitter.com/iz2ucgJpbj

But while New York had a difficult time scoring, the Raptors did as well. This game had an old-school feel to it—it was a low-scoring affair with high-level defense on both sides. Head coach Tom Thibodeau should be happy with his team’s effort on defense—the rim protection was stout all night long, while the guards of New York were effective in harassing the Raptors’ guards on the perimeter. The Thibodeau effect is no myth. New York’s improvement on the defensive end compared to the year prior is evident.

The Knicks managed to stay within striking distance of Toronto for most of the night with their sound team defense. That all changed once the fourth quarter began—the Raptors turned up the intensity on both ends and never looked back. After trailing by just seven heading into the final frame, the Knicks were outscored 29-19 over the last 12 minutes, sealing the victory for Toronto.

With all that said, here are a few notable takeaways from tonight’s action.

The play of Kevin Knox off the pine was a bright spot for New York in this one. For the first time this season, Knox reached the double-digit mark in scoring. He performed at the top of his game on the offensive side of the ball—nailing catch-and-shoot treys and aggressively attacking the rim when holes in the defense appeared. Knox flashed the level of confidence that he played with during his best performances of the preseason.

Here’s to hoping that Kevin can harness his productive night scoring the ball and replicate it consistently. With the likes of Obi Toppin and Alec Burks down for the court as of now, the Knicks desperately need someone to provide a scoring punch off the bench in the short term. Knox can be that guy.

Knox with 3 the hard way pic.twitter.com/vHSN3cSg4z

R.J. Barrett’s shooting woes carried over into Thursday night’s contest. He went 0-for-8 from deep and started the game with an airball. Barrett couldn’t find the net from the perimeter—he only found success putting up points when driving to the rack.

While Barrett failed to shake his shooting slump, he characteristically impacted the game in a variety of other ways. He was his usual active self on the glass, and he did a solid job handling the playmaking duties for New York—Barrett found a cutting Elfrid Payton for a few easy baskets and made some impressive dump-off passes to bigs.

While it’s paramount for Barrett to improve his efficiency, it’s encouraging to witness him contribute in multiple facets.

Julius Randle once again looked the part of a star tonight. Randle destroyed Toronto’s bigs inside with his patented bully ball style of play. He accumulated a double-double with five assists despite being blitzed on many of his touches. Julius made the right play time and time again when double-teamed—he would have had even more assists if the Knicks made their perimeter jumpers. Randle made things happen for New York on a night where not a lot of Knicks had productive nights offensively.

Austin Rivers made his Knicks debut, scoring seven points and dishing out five assists across 21 minutes of action. It was evident that Rivers was one of the most effective playmaking threats on the floor for New York tonight. It will be interesting to see if Austin continues to be part of the rotation once Immanuel Quickley recovers from his injury. While Rivers is arguably the superior passer and defender at this juncture, Quickley is a lethal perimeter scorer with loads of upside.

The Knicks return to action in the New Year on Saturday in Indiana to face the Pacers, who just found out small forward T.J. Warren is out indefinitely undergoing surgery on a stress fracture.