Honey, I Shrunk the Knicks: How New York Can Utilize Small Ball 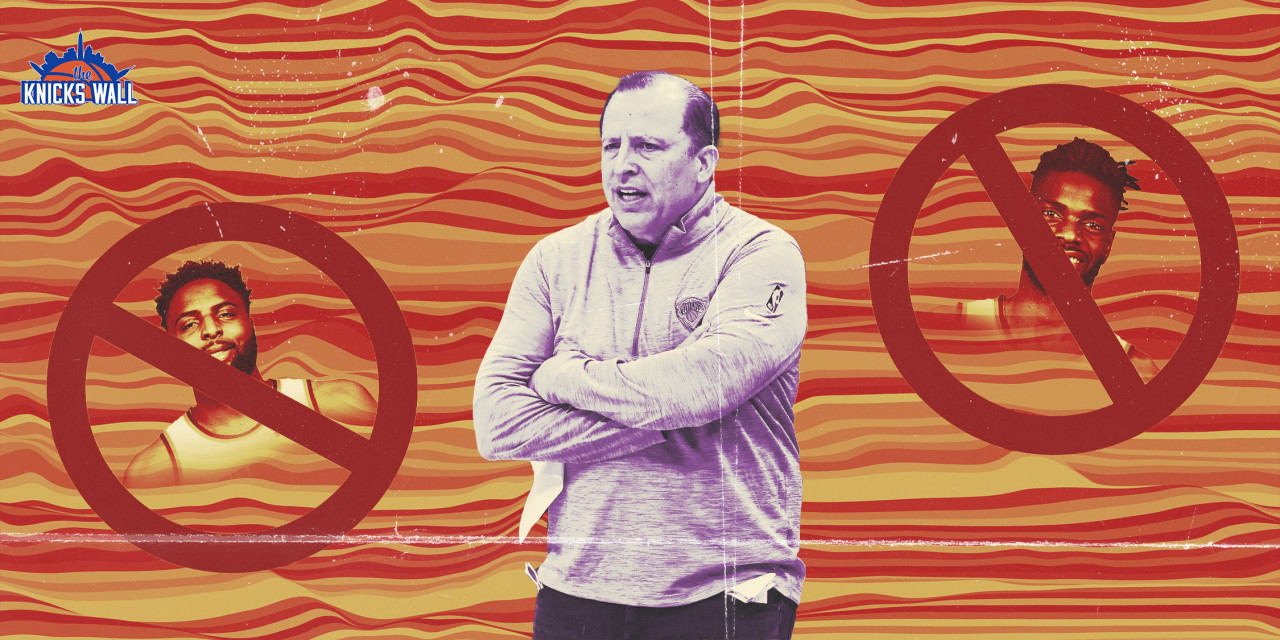 Downsizing to a small-ball lineup could help unleash the Knicks’ offensive potential and unshackle them from a messy fifth of the season.

After a blistering 5-1 start to the season, the New York Knicks have plateaued and collectively been in a slump, clawing their way to a 9-8 record with the need for adjustments becoming all too apparent.

As currently constructed, the starting five is the worst in the NBA. This is not hyperbole; it is plainly there in the numbers.

The five-man lineup of Walker, Fournier, Barrett, Randle, and Robinson has logged the most minutes of any group across the Association, but it has yet to reap the rewards many thought it would.

Of the 33 lineups across the league to have logged 75 or more minutes together, New York’s core five have the 10th-worst Offensive Rating (102.9) and the second-worst Defensive Rating at a mark of 117.9, equating to a Net Rating of -15.5, only better than Houston’s most-utilized lineup and two of Oklahoma City’s most-run groups.

Overall, the starters are playing at the level of a rebuilding team, and it was clear this was the case in their narrow victory over the Rockets. Offensively, they are inefficient with shooting splits of 42/36/69, and lack of cohesion can be seen in the long periods of futility, namely at the beginning of halves.

Indicative of New York’s struggles is the pace at which they play, in this case, it’s unfathomably slow. The Knicks began the preseason at a blistering pace, but any up-tempo game has disappeared through the first 17 games with the possessions per game sitting at 97.54, only slightly quicker on the snail-like pace of last season—96.32 (the league-slowest).

For New York, there is yin and yang. For how poorly the starters have played, the bench is the opposite. Somehow, someway, the Knicks manage to boast the worst and best five-man groups.

The Knickerbockers’ main bench mob consisting of Rose, Quickley, Burks, Toppin, and Gibson (due to Noel’s unavailability) has continually run amok on opposing benches. The continuity on both ends of the court is evident in the same numbers that show the starters’ lackluster play. They do not necessarily pile it on offensively, but the OffRtg 112.2 is good for ninth out of eligible lineups on splits of 45/40/89 while defensively they are entirely reminiscent of who they were last season.

When the five bench players are in at once, the “welcome to hell” defense of last season’s group has been on display, posting a league-leading DefRtg of 84.2, with a Nuggets lineup being a distant second. All in all, it comes out to a NetRtg of 28.0, again a league-leading figure.

Overall, this issue of being league best and league-worst all in the span of a 48-minute basketball game comes back to Tom Thibodeau. He must begin to try and find a balance within his most-used lineups as the continual sticktoitiveness with an impotent group actively hurts his chances of winning games.

A possible solution to some of the Knicks’ issues—it’s not one-size-fits-all—is to experiment with downsizing. It’s a rotational ploy seldom used by Thibodeau’s Knicks, but there has been a greater willingness to do so this early this season compared to last.

The obvious answer is more Obi Toppin next to Julius Randle, which was used to great acclaim in the season-opener and more recently in the Knicks’ comeback victory over Indiana. Thibs got weird (by his standards) one time in Philadelphia, albeit for only two minutes, with a four-guard set alongside Toppin.

The main argument for small ball comes down to a singular player; Obi Toppin. New York has been significantly better when he is on the floor, +19.5 points per 100 possessions, per Basketball-Reference, and partly so because of the intangibles he has brought in his sophomore season.

Toppin runs the floor with abandon, creating easy scoring opportunities for himself, but he has also become a functioning part of the offense in the halfcourt. Pre-draft comparisons to former Knicks Amar’e Stoudemire are correct in that Toppin is highly efficient in the pick-and-roll.

A better touch around the rim with either hand has been displayed this season while the jaw-dropping athleticism has been allowed to breathe more, be on backdoor lobs, screen-and-rolls, or catches in the dunker spot.

Toppin, sometimes to his detriment, is unselfish and always looking to make the next pass, keeping the offense and himself constantly moving. This tendency would be tremendous if the Knicks were to go small. Having the Wilson ball buzzing around the perimeter with weak side, and on-ball action will create cross matches and miscommunications leading to a high-powered offense.

More Toppin also wouldn’t be to the defensive detriment to the team, as he has shown clear improvement on this end, both on the interior and perimeter. Toppin blocking three-pointers has become a regular occurrence.

New York’s largest issue defensively this season has come on the perimeter and a cause of this has been paint-sitting big men. Mitchell Robinson isn’t as fleet-of-foot as his rookie year, and he has tended to close out to the perimeter on an infrequent basis, which Taj Gibson and Nerlens Noel have been guilty of too; however, all three can be willing competitors on the perimeter, while Julius Randle has been a culprit on losing focus and missing assignments completely.

Going smaller in exchange for mobility, agility, and switch-ability would likely minimize the current issues on the perimeter and it has been seen, to great effect, how smaller lineups can cause absolute chaos defensively.

Knicks finally with some CLAMPS and the Garden is rocking pic.twitter.com/qYkO73TEnI

Another advocate for downsizing would be impact in the long term. In last season’s playoffs, New York was exposed for the lack of any offensive contribution from their centers, with the Toppin-Randle pairing becoming a last resort. Persisting and experimenting over the course of 82 games to see what and who work together would be an investment with which could pay dividends down the line

The ‘Bockers and their coaches have been vocal in their aim to take more threes than a year ago, something in which they have done overall, and at a pretty darn good clip too—sixth in makes per game and fifth in percentage—and small ball could open this up further. Additionally, their interior game would stand to improve for downsizing, too, specifically for Julius Randle as was seen in the loss to the Bulls.

Excluding the showcase against Chicago, where the Knicks’ main man went to work in his office, Randle is taking 10.6 two-point field goal attempts per game, the lowest mark since 2017–18 with Los Angeles, converting at 43.5%. Interestingly, 64.7% of Randle’s field goal attempts are from two-point range, yet only 49.6% of his points come from such distance. Randle mentioned after the season-opener he feels he would have a mismatch against most centers when he plays the position, and he is quite right. Randle is quicker off the bounce, and he would be able to get the basket more for cleaner looks, which would, in turn, free up his passing game, further enabling the Knicks’ shooters.

RJ Barrett has been in an extended slump, but playing in a more open offense, with more space and a quicker pace, would no doubt help him find his groove again. In the last 10 games, the third-year swingman has seen his finishing numbers plummet to 42.4% on looks within five feet of the basket while converting only 15.2% of his looks via jump shots, per NBA Stats.

More space equals more room to drive, as would a faster pace—Barrett has been excellent in early clock situations (he shoots 44.3% from the field between 24-15 on the shot clock, but it amounts to 38.8% of his attempts) and more movement on- and off-ball would create cleaner, less-rushed three-point looks.

You cannot stay in front of RJ! pic.twitter.com/vuuZjMCmqr

The changes would come at a cost, fewer minutes for Robinson and Noel/Gibson, which might not be the worst idea as it could preserve them for the long run. On the other side of the coin, though, would egos be affected? Noel signed a three-year deal and would expect minutes while Robinson wants to play and maximize his time to land his next contract.

Another aspect of going small would see New York’s rotation (likely) expand; Kevin Knox could come in and play as a stretch 4, while Quentin Grimes can slide those feet of his and run the train tracks. It would allow the Knicks to evaluate players and, if it doesn’t work, there you go, you know, and if it comes out to a positive, great! Less reliance would be placed on veteran legs like Walker, Rose, and Burks, plus extended and more frequent rests for a fatigued-looking Julius Randle.

The biggest obstacle to running these experiments would be the man who would have to run them: Tom Thibodeau. It is obvious a season plus in he is stubborn, and change does not come easy to him, but adaptability is key throughout an NBA season and having different looks to throw and gears to go to against opponents, especially at the pointy end of the season, is paramount if the Knicks are to be successful.

This isn’t to say New York desperately needs to abandon how they play completely and immediately. There will be games when you need two big men, say against the Philadelphia 76ers. It is to say, though, New York needs to be willing to change and adapt to the game on a nightly basis as you can’t always have the game on your terms.

Toppin and Randle together is a start, but the Knicks must experiment further and take a plunge off the deep end.