In their first meeting this season, and on the second night of a back-to-back, the Knicks could not keep pace with the Charlotte Hornets, losing 119-107 to the .500 team.

After a closely contested first quarter, the Charlotte Hornets pulled away in the second and the New York Knicks were unable to recover.

The Knicks (8-20) were playing from behind for virtually the entire game. Once Charlotte (13-13) attained separation, it simply piled onto its lead the rest of the way, keeping the Knicks out of reach. The Hornets enjoyed a 119-107 victory over the Knicks in their first meeting this season. With the loss, the Knicks have now lost four straight games.

After a close 27-24 first quarter clash with the Hornets barely in front, Charlotte was able to begin the second quarter by outscoring New York, 25-10. From there, the Hornets enjoyed a 61-47 lead at halftime and coasted to the final buzzer. They were able to push the lead as high as 28 points midway through the third quarter, but then the Knicks started stringing together some baskets and chipped away the Hornets.

Unfortunately for them, the Charlotte lead was too great to overcome and the Hornets easily hung on for the win.

While most of the fanfare and attention goes to the Hornets’ Kemba Walker, it was far from a one-man show. Aside from the dynamic point guard, who finished with a team-high 25 points, four other Hornets finished in double figures—Jeremy Lamb (19 points), Tony Parker (16), Marvin Williams (13), and Cody Zeller (12).

The Hornets powered their way inside and dominated play in the paint, holding a 54-40 advantage over the Knicks in points scored down low. The disparity was a lot greater, until the Knicks made it more respectable in the closing minutes of the game, but by then the game was already decided.

Charlotte set the tone early, as its tenacious approach to attacking the basket gave the Knicks fits. New York failed to find an answer for it. It didn’t help that even when the Hornets were unable to finish, they were rewarded with trips to the free throw line, as they baited the Knicks into fouling. The Hornets cashed in on 23-of-27 (85.2 percent) foul shots.

Sure, Walker is crafty as ever, but it was Lamb, Zeller, and Parker spearheading the attack inside. Lamb was a perfect 7-for-7 inside the arc, as was Zeller, who was 5-for-5 and set the tone early for Charlotte. Parker dealt all of his damage up close, using his veteran savvy to fake out and fool the Knicks’ interior defense.

For the Knicks, it was another rough game in what hasn’t been an easy stretch since that overtime win against the Milwaukee Bucks. The Knicks got only 15 points from the four starters not named Tim Hardaway Jr. While Charlotte was finding success attacking the basket and getting to the free throw line, New York couldn’t say the same. The Knicks only shot seven free throws for the entire game, making six of them.

On the bright side, there were some things to cheer about and look forward to in the coming games. Hardaway got himself going again after scoring a meager seven points in the loss to Brooklyn on Saturday. He was the only starter to find success, offensively, and finished with 21 points off of 7-of-13 shooting.

While he was good, it was the younger players who stole the show. Kevin Knox, Damyean Dotson, and Frank Ntilikina combined for 56 points—just over half of the team’s scoring total. Knox excelled with a 26-point, 15-rebound double-double performance off the bench. He found success from long range, making 4-of-8 shots from beyond the arc and tying his career-high mark, which he set against Milwaukee on Dec. 1. Knox was confident and assertive, and he put together his best showing so far of his young career.

Dotson was efficient and effective in his 31 minutes of action, scoring 12 points on 6-of-8 shooting. He also had three assists and was the only player who played for more than 20 minutes and finished on the positive side of the plus-minus scale.

Lastly, Ntilikina had a career night, dazzling on offense. His first taste of action after three-straight DNPs against Brooklyn on Saturday, Ntilikina followed up in a big way, and exploded in the second half. He led a surge that trimmed the Hornet lead to as low as 14 early in the fourth quarter, forcing a Charlotte time out. Unfortunately, his night was cut short when he picked up his sixth foul. He exited the game with a career-high 18 points and four made three-pointers. However, that abrupt ending has Knicks fans clamoring and curious for more. Has he finally turned the corner?

We’ll have to find out on Wednesday night, when the Knicks head to Cleveland. Tip-off is scheduled for 7:00 p.m. EST. 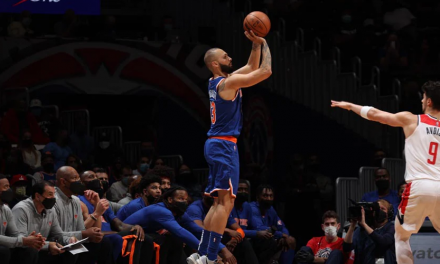 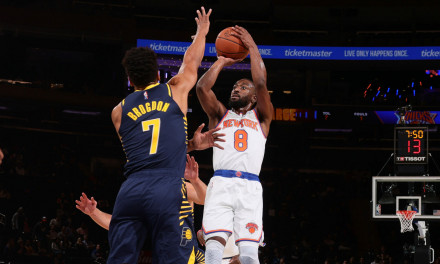