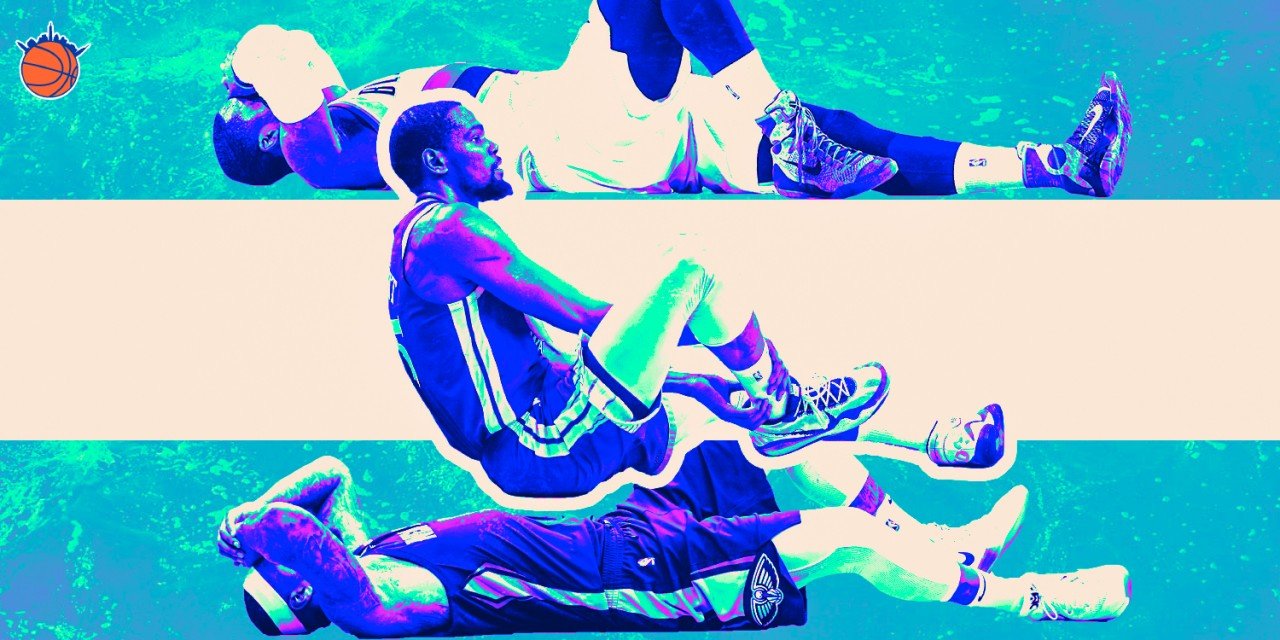 Kevin Durant’s free agency was marred with a ruptured Achilles in the NBA Finals, and it’s not unfounded to believe the forward will never be the same afterwards given modern case studies.

At first, everyone said the rumors were too good to be true. People gawked and chortled at the notion that Kevin Durant would leave the championship-caliber Golden State Warriors for an embarrassing and dilapidated New York Knicks.

Still, the whispers grew louder, our skepticism waned, and the consensus was that drinking the Kool-Aid wasn’t so bad after all. Then, disaster struck in Game 5, and the conclusive news about Durant’s ruptured Achilles heel crushed the Knicks dreams instantly. Arguably, Knicks fans were just as upset as Warriors fans that night. Then June 30th happened and #KnicksDrinkCheck became the most recent way for Knicks fans to commiserate.

Will Kevin Durant return to MVP form? Not likely. But is he still worth the max contract he’ll likely be paid? That’s the one-hundred million dollar question the Nets are facing. However, they wouldn’t be the first to sign a player after suffering a traumatic Achilles injury.

Below we’ll look at the precedent for Achilles injuries and how the players have fared afterwards. Since catch-all statistics are more prevalent in today’s game than ever before we’ll use PER, player efficiency rating, and VORP as indicators of the player’s decline or resurgence. When comparing different players PER is a shoddy metric at best since the formula incorporates advanced statistics. And, to be clear, multiplying and dividing random numbers doesn’t make a statistic good or useful. The same goes for VORP. Instead of comparing different players using statistics that place them worlds apart contextually, we’ll analyze the same player during different periods in time. Medicine in the modern era is more advanced than the NBA’s previous incarnations as well, so we’ll limit our scope to the most recent cases of players who faced Achilles injuries.

Before Durant’s injury, his teammate, DeMarcus Cousins, was the most recent tragic tale of a star facing the dreaded rehabilitation of a ruptured Achilles. Cousins suffered his career injury in January while the New Orleans Pelicans were just finding their rhythm. When he went down the Pelicans made a playoff push and advanced to the Western Conference semi-finals without him.

The Golden State Warriors signing him for the 2018–19 season dropped everyone’s jaws although he wasn’t scheduled to return until late in the season. Unfortunately, Cousins return to the court was a letdown as Kerr neglected to incorporate the still-recovering center into the Warriors offense. Cousins was never a rim runner, and the loss of mobility due to the Achilles injury looked even worse with the Warriors’ fast pace. A former All-Star he wasn’t a lost cause, but he never found a real role besides being as “SacTown Boogie” as his body allowed him to be.

All in all, he had a fairly glum return to basketball, but on a $5 million contract near the veteran’s minimum he was as productive as anyone could ask him to be. Cousins was never an integral part of the Warriors and was more window-dressing than anything, but he still showed he was talented enough to showcase value in the NBA. His next contract will likely be in the tens of millions, and for good reason—he may still have another all-star appearance in his bag.

Cousins injury and recovery is a bit like a middle ground on the spectrum of success after Achilles injuries. Wesley Matthews, however, is a different case altogether.

Former Knick Wesley Matthews suffered an Achilles injury in March yet still managed to sign a fairly lucrative four year contract that July. That summer and the following free agency were two years where lackluster players hit the lottery and signed contracts that can be described as “player-friendly.” Considering his production drop off, Matthews’ $70 million deal with the Mavericks is a great moment in securing the bag.

His three-point shooting percentage has hovered around league average, not dipping below 36% in his season after coming back from the injury, but his field goal percentage dropped from 44.8% to 38.8%. A player shooting below 40% is never good. While he came back to miraculously play more games than he did in the previous season, his drop off in two-point field goal percentage from 53.4% to 43.2% is a highly unwelcome change in a player whose role is bucket-getter.

By all accounts, Matthews was a worse NBA player after his Achilles injury. The serendipitous waiving by the Knicks and signing with the Indiana Pacers spurred him into contributing on a playoff team (that was swept). Whatever big role he could have dawned on a team was killed by the Achilles injury. It looks like the bench is the best place for Matthews as he nears the end of his career. Even then, he’ll still need to carve out the role of a knockdown three-point shooter if he’s to add value to his team.

Matthews, a wing by trade, never recovered and Cousins barely stayed afloat after his Achilles injury, but Rudy Gay somehow found a way to somewhat prosper.

Rudy Gay struggled to meet expectations throughout most of his career and the Achilles injury in 2017 was a misfortune that could only be predicted to cut short Gay’s middling career. However, Gay’s injury didn’t stop him from signing with the San Antonio Spurs. His reduced role in coach Gregg Popovich’s office decreased his total production, but his efficiency increased to a career high in the two subsequent seasons. Coach Pop has a way of bringing out the best in his role players and Rudy Gay is a prime example.

In Popovich’s system, Gay’s minutes per game numbers dipped by 10. With his responsibilities minimized and a team built around a collection of similarly talented and diversely-skilled players Gay found a happy medium as a contributor after a debilitating Achilles injury. His salary fell to rookie-contract levels, but with less strain on his aging body, it may be for the best he’s taking a backseat. Comparatively, he’s having the same amount of impact on the court by bolstering his shooting inside the arc. His three-point shooting declined from 37.2% to 30.1%, but overall his mid-range game improved. Maybe his shot selection got better after leaving a 32-win David Joerger led Sacramento Kings. Maybe the injury forced him to buckle down and pick his shots more wisely. Either way, he turned a career-ender into a career-changer and that may in fact be his greatest feat yet.

The precedent of players returning from traumatic achilles injuries isn’t one filled with many triumphs. A lot of sufferers, from Brandon Jennings to Kobe Bryant, lost a step and never regained their greatness, the lack of mobility hampering them. Very rarely has a Rudy Gay–esque adjustment resulted in triumph. He’s by far the most positive of the results.

Gay re-signed with the Spurs this July to a two-year contract worth $32 million.

Kevin Durant is an altogether different case than the others, however. Already a consummate scorer on every level, is there another way for him to elevate his game to make up for his new limitation? Will the injury matter much less since he’s already proven himself to be one of the greatest basketball players of all time? These are the scary questions the Knicks’ front office, and subsequently the Nets’ answered, needed to ask themselves; and, apparently, their answers differed widely. Scott Perry and co. winced at the idea of handing Durant an enormous chunk of cap space where he won’t even play in the first season.

It’s a tough call, but with the floodgates of free agency opening and teams already retooling with trades, a decision had to be made. Is 30-year-old Kevin Durant, a 10-time all star with a history of right foot injuries worth a max contract? We might not know the answer for years to come.