How Does the Knicks Front Office Respond to RJ Barrett’s Progress? 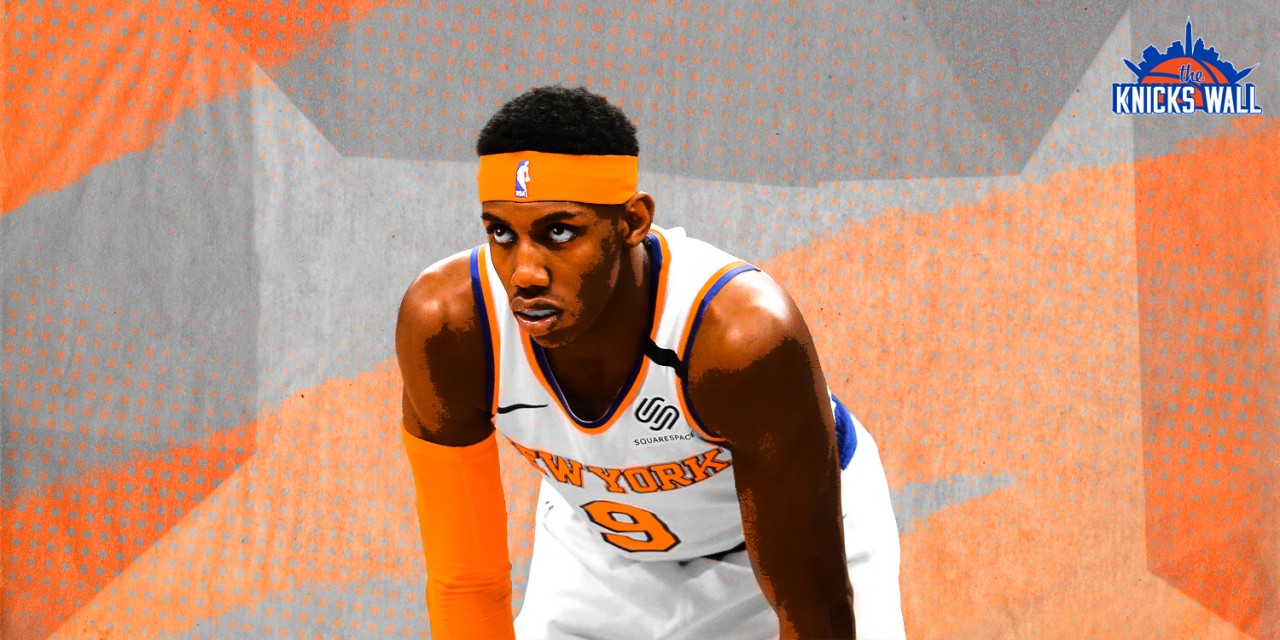 RJ Barrett is developing nicely for the Knicks, but now it’s up to the front office to match the talent and build coherently and correctly.

The phrase “good things come to those who wait” is not one you find taped to the wall while perusing the halls of the Tarrytown facility or Madison Square Garden, nor the streets of New York City for that matter. Time waits for no man, and no man waits in New York City.

That is one of the many reasons R.J. Barrett’s rookie season did not feel as promising as the numbers suggested.

Barrett finished top five among rookies in points, rebounds, and assists. He finished sixth in total steals. Despite this, Barrett failed to make either All-Rookie team. The general sense surrounding Barrett that his future as a good player was still TBD heading into this season.

The ultimate reason for skepticism around Barrett’s current skill level and long-term outlook is attributed to framing. The alternative plans fans and the general basketball world had for the New York Knicks following a 17-win season were much larger than drafting Barrett and calling it a day. Barrett is neither Zion Williamson nor Ja Morant. He is not playing next to Kevin Durant.

Now that the foolish framing is (hopefully) past us, Barrett can enjoy being the new face of the Knicks in peace.

At the time of the All-Rookie omission, the hope among Barrett supporters was that he would use the snub as motivation. It is something Barrett himself admitted bothered him, and thus far it appears that motivation is manifesting into something tangible for him and the team.

In the infant stages of his sophomore season, we have seen the Barrett we saw thrive at Duke and the Canadian national team: a confident, comfortable slasher with a bottomless pit of energy who can do a little bit of everything.

Barrett is currently averaging 16.3 points per game along with 7.3 rebounds, 3.8 assists through four contests. There have been no instances of tunnel vision—a high concern about Barrett coming out of Duke—and the jumper has looked better. The most encouraging number from Barrett’s stat sheet has been the 16-point increase on his free throw shooting, currently at 77.8% (last year he shot an icy 61.4% from the charity stripe).

If this is not a small sample-size aberration, there is a clear path to Barrett becoming a 20-point scorer when you take into account his craftiness in getting to the rim and general comfort with the speed of the game.


The next phase of Barrett’s development does not involve R.J. at all—it involves the front office responding with a roster that brings out his strengths and hides his weaknesses.

The Knicks are already off to a better start on this than they did with the last draft pick worth building around, Kristaps Porzingis, by bringing in a front office and coaching staff whose mandate is to squeeze out every bit of potential.

Leon Rose has already started to make minor improvements to the roster to better fit Barrett: drafting Obi Toppin and Immanuel Quickley, both vast shooting upgrades over Julius Randle and Elfrid Payton, and signing self-creating shooters Alec Burks and Austin Rivers. Tom Thibodeau has kept Barrett on the floor a lot (37.1 minutes per game through the first four games) and made him the focal point of the offense.

As long as Barrett can maintain his level of play under Thibodeau, Rose has a player he can sell to prospective star players. Make no mistake, the Knicks are still in the market for a star scorer and should be. The problem over years has been the Knicks selling the wrong things. Players can live in NYC in the offseason should they desire. They can enjoy playing at MSG when they visit.

At the end of the day, it comes down to dishing out a lot of dough and offering a fun team to play with. James Dolan always had the money to offload, but now he also has Barrett to offer.

So now that Barrett is an attractive player to play with, how should the front office respond?

There are really only two courses of action here. One, they accept Barrett’s progress as a successful season, thank the basketball gods for the blessing, win every third game and head into the lottery again, and hope to land another promising prospect. The other option is aggressively improving the roster in the immediate future by adding player(s) that can further make Barrett’s life much easier.

The Slow and Steady Approach

The most obvious and least appetizing option is to do nothing. Even if Barrett morphed into 2005 Dwyane Wade, what would that do in a loaded Eastern Conference? Not much. Barrett, Mitchell Robinson, Toppin, and Quickley are a good base, but the team is still missing someone capable of dropping 20 points nightly. Randle has given a taste of what that life is like when Barrett shares the floor with someone the defense has to pay attention to.

One way to achieve this is to commit to another sub-30 win season once more by leaving the roster as is.

A top-five pick in 2021 is infinitely more valuable than a top-five pick in the 2020 draft was. Should the Knicks find their way into the top five they will guarantee themselves a shot at one of the Jalen (Suggs, Green, or Johnson), Jonathan Kuminga, Evan Mobley, or Scottie Barnes. A top-10 pick can still be good enough to land a shot creator like BJ Boston. Then there is the extra Dallas pick to consider, should the front office fall in love with one prospect in particular.

Why would Rose opt for the slow burn approach? Well, the lack of potential blockbuster trades. A draft pick costs nothing, which allows the team to remain financially flexible for a big trade should an opportunity present itself.

Rose did not sign on to carefully build, he signed up to make a big splash. Rose’s problem is there is no star available at this point. Should that change tomorrow, a few months or a year from now, Rose will have cap space and a young group of players worth pitching someone on, headlined by Barrett.

The fan base has been excruciatingly patient with the everlasting rebuild, so it is not out of the realm of possibility to suck one more time, but losing on purpose just does not seem to mesh with Thibodeau’s values.

As stated earlier, there is no blockbuster trade on the horizon. Also, maybe Rose and Thibodeau think this team is one good player away from being a competitive team. Thibodeau did say earlier this year that the team needs a star player of its own. There are some players the team could take a swing on to achieve this.

Victor Oladipo makes the most sense if the team wants to take a swing on an All-Star-level player on an expiring deal. Scott Perry was part of the Orlando Magic front office that drafted Oladipo and already tried to persuade Rose to make a deal to no avail. With Barrett looking good and Oladipo looking much better this year, maybe Rose can be persuaded to reconsider.

Rose could be more worried about parting with assets to watch Oladipo walk for nothing, a valid concern, but Oladipo might have an interest in being a Knick. After all, he did ask to come play in New York last season. If he could return to full form he is an explosive athlete in his own right that will enjoy playing with the well-rounded Barrett and still be considered the top dog.

Another All-Star-level player on an expiring deal worth a look is DeMar DeRozan. DeRozan offers a similar one-two punch on the wing with Barrett that Thibodeau could stagger so that one is always on the court. DeRozan gets knocked for his lack of outside shooting, yet he has managed to average no less than 20 points per game the last eight seasons. The most appeal DeRozan brings is a cheap price tag. DeRozan is not expected to stay in San Antonio beyond this season, so it would behoove the Spurs to get anything for him.

RJ BARRETT WHAT A FINISH pic.twitter.com/7FrdEJidXw

If the team feels strongly that Barrett can become a number one option with the right supporting cast there are some options to facilitate a more democratic scoring approach. Buddy Hield is a dream fit; the sharpshooter would be on the receiving end of a lot of Barrett passes and open up the floor in ways Barrett hasn’t seen since high school.

Hield is already signed to a long-term deal so the price may be expensive compared to what the team would like to spend. Still, the chance of a 41.0% career three-point shooter who can flirt with 20 points a night and has a reasonable cap hit through 2024 that will not cripple a cap is enticing. The hard part would be convincing the Kings to take such a good weapon away from De’Aaron Fox.

A cheaper proposition would be Lonzo Ball. Ball would fit well with the Knicks for so many reasons. Ball offers the playmaking prowess Thibodeau likes in Elfrid Payton, only Ball is now a threat from deep, in addition to a good defender and a lob threat. The Knicks are still not getting up and down the floor, with Ball that can change and lessen the need to acquire a star scorer.

The price of Ball is a mystery. Pelicans executive David Griffin is a fan of Ball, so it’s not a foregone conclusion Ball is not a high priority, but the lack of an extension leaves the possibility open that the Pelicans might be in that non-committal yet hopeful stage with Ball that the Knicks appear to be in with Frank Ntilikina. Rose could use Ntilikina, and maybe even Dennis Smith Jr., in a package for Ball with picks attached.

There some other fun additions the team could look to make like Zach LaVine or even Terry Rozier. The good news is there is no rush. The way Randle has played to start the season, Barrett might not need as much help right away. The important thing is the front office does not lose its momentum and keep its current course on finding Barrett’s ceiling.

»READ: Knicks’ RJ Barrett sees need to ‘protect home court’ even when fans are away