How Does a Tom Thibodeau-led Team Fare in the Postseason? 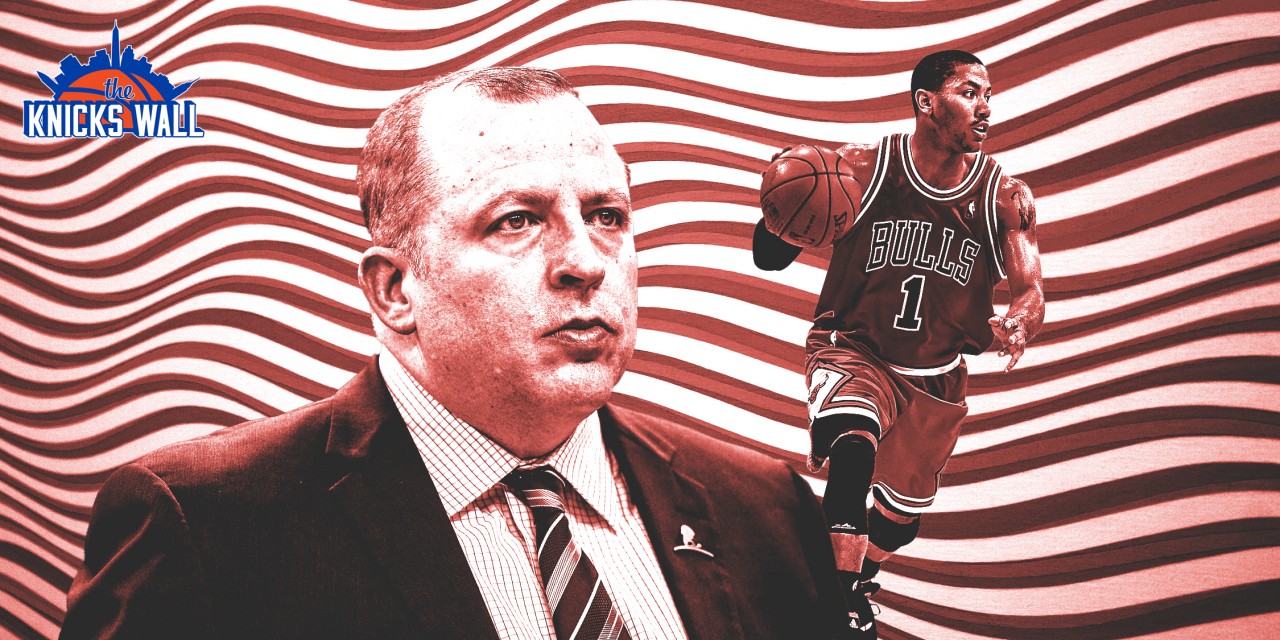 Just because the Knicks are in the playoffs for the first time in eight years, doesn’t mean fearless leader Tom Thibodeau hasn’t experienced a taste of the postseason before.


It’s hard to believe that Tom Thibodeau’s New York Knicks are once again a playoff team. And not just a playoff team, but a team with home-court advantage! After all the years of hoping, planning, pining for superstars, failing, it turned out the best practice was… patience? Whodathunkit!

So with the Knicks and Atlanta Hawks set to tip off on Sunday, it’s time to dive into the history of one of the men responsible for bringing postseason basketball back to The Garden to see what we can learn from his past experiences.

Sometimes it’s hard to remember that for as long as Tom Thibodeau has been around the NBA, this is still only his ninth season as a head coach. While no one would mistake him for a spring chicken, he’s still relatively young in coaching years. And despite his ill-fated stop in the Twin Cities, Thibodeau is currently 15th all-time in career playoff wins among coaches who have fewer than 10 years of coaching (24-32, one conference finals trip).

Let’s take a look at some of the trends from his previous playoff stints to try to get an idea of what the Knicks’ gruff-neck coach will likely expect from his scrappy group of overachievers.

The last time we saw Thibs in the playoffs, it was an abject disaster. The Minnesota Timberwolves, fresh off the first losing season of Thibodeau’s career, reunited the coach with his glory days by adding Taj Gibson and Derrick Rose (sound familiar?) along with fellow ex-Chicago Bull Jimmy Butler to the pre-existing core of Karl-Anthony Towns and Andrew Wiggins. In an effort to boost the team’s shooting, Jeff Teague was brought in and Ricky Rubio shipped off to Utah.

And for a while in the regular season, it appeared to be working. When Butler went down in late February, the Wolves were clinging to the four seed (sound familiar??), but they cratered without their defensive and mental leader, ending the season as the eighth seed and with the unenviable position of going up against the Chris Paul, James Harden-led Houston Rockets with their best wing and most important defender forcing himself to rush back from injury.

Given the circumstances, no one would blame the Wolves for bowing out in the first round. However, the way the Wolves beat themselves was especially disheartening. Towns, one of the best shooting big men in the league, was third on the team in shot attempts by the time the series ended, with Rose only three shots behind. In total, Towns finished with fewer attempts than the likes of Butler, Rose, Teague, Wiggins, and Jamal Crawford.

Despite the option of playing a four-out offense, with Gibson as the hub inside, the team fell into an isolation-heavy style of play that played right into the Rockets’ hands and was a departure from the attack that had allowed them to succeed all season. In the regular season, 8.7% of their possessions had been isolation plays. That number shot up to 18% in the playoffs while the number of passes made per game fell by over 30. Butler, still recovering from his injury, tried once again to lift the team onto his broad shoulders, but this time, he couldn’t make it work.

Fair or not, the lingering memory of the Timberwolves in the 2018 playoffs will forever be that of the mediocre point guard tasked with too much responsibility and the coach unwilling and unable to make the necessary changes to get his stars the ball in the right spots.

If you’re wondering why I’m sharing this specific and unpleasant memory, well… you must be new ’round these parts.

But enough doom and gloom! Thibodeau—despite an annoying, borderline troll-god level of resistance to change—has made it clear over the last few weeks that Elfrid Payton’s spot in the starting lineup is closer to an honorific than a testimony to his importance to the team.

And besides, there are plenty of reasons for optimism heading into their first-round series against Atlanta. This Knicks squad is one of the three best two-way teams Tom Thibodeau has had in the playoffs, and there’s a decent argument it’s better than the lone Rose-Butler year, in which two 34-year-olds—Pau Gasol and Mike Dunleavy Jr.—combined to average 61.8 minutes per game.

After going 22-13 on a brutal schedule to end the year, this team is clicking at a perfect time thanks in large part to their three-point attack. Following the All-Star break, the Knicks as a team shot 40.9% (best in the league) on 32.5 three-point attempts per game, the 19th-highest mark during that time. That may not sound like a world-beating number, but given that pre-All-Star break they were 29th in the league at 27.8 attempts a night, 19th represents a massive shift in their offensive make-up. This is a wildly encouraging trend, for multiple reasons.

The first reason is simple: the Knicks, for once, actually have the personnel to pull off a three-point heavy attack!

This graphic doesn’t even include Frank Ntilikina (who may actually play against the Hawks!) and his 47.9% on the season. Apologies to Chris Copeland and Steve Novak, but it’s hard to remember the last time the Knicks had this many shooters who weren’t functional zeros at all other aspects of basketball.

This is crucial because Thibodeau’s teams have historically actually upped their three-point attempts in the playoffs. Over the six seasons that Thibs led his team to the playoffs, there have only been two times where the number of attempts went down in the postseason: the disastrous Rose injury year, where Joakim Noah had to step up and lead the team in scoring, and the previously discussed Wolves year, when KAT couldn’t get a shot up to save his life.

Surprised? I was too!

The one interesting wrinkle here is the Timberwolves, who only lost one and a half possessions and in fact, managed to increase the percentage of plays in transition by nearly 6.0%. This is relevant because the Knicks, like the Bulls before them, play as slow as a sloth in a tar pit. On the season, the Knicks played with the league’s slowest pace, and it’s one of the few numbers that hasn’t seen a marked upswing in the second half of the year.

They run the fourth-highest isolation rate in the league despite having only the 14th-highest efficiency in such plays, and only the thinnest possible margin keeps them from possessing the lowest frequency of transition plays in the league, despite having guys like Randle, Rose, and Alec Burks who can thrive attacking a transition defense. I omit R.J. Barett here only because he still hasn’t quite figured out what to do in transition and his forays often end in tragedy.

There is both good and bad to take away from these numbers.

The bad is that many of the best-performing playoff teams over the last few seasons tend to have pass-heavy approaches with isolation sets sprinkled in, as opposed to the other way around. Of course, there are exceptions—teams like the Clippers and Trail Blazers, with Kawhi Leonard and Damian Lillard, respectively, feature a ton of isolations. But in general, teams that rely too heavily on isolations (especially without a 99th-percentile isolation scorer) tend to struggle against playoff defenses.

This is particularly dangerous for someone like Julius Randle, who finished with the fifth-highest frequency of isolations this year while only being in the 58th percentile for such plays. His hot shooting and incredible playmaking offset those numbers to the point that he’s still a ridiculously effective primary engine, but if he starts relying too much on his iso-game in the playoffs, it could end up hurting the team’s offense.

Even in the regular season, this reared its head in how Randle struggled to find good looks for himself and others in late-clock situations, whether at the end of games or quarters. Oftentimes, he ended up too focused on hunting a shot for himself, to the detriment of the kind of ball movement that defined the team’s success at its best.

This can also be seen in the numbers: according to Inpredictable Stats, Randle was in the top-10 in game-deciding/buzzer-beating shots attempted this season while having the sixth-lowest effective field goal percentage of anyone in the top 25. Granted, Atlanta’s Trae Young had the lowest eFG% of anyone in the top 25, so it may even out a bit.

But the good news is that this team is ready for playoff basketball. While it would be nice to see them get out and run more to really put pressure on Atlanta’s relatively weak defense, the kind of grind-it-out, rough-em-up game that the Knicks have played all season is exactly why they will make life so difficult for the Hawks.

Simply put: the day after a team plays the Knicks, they know they’ve played the Knicks. They feel it. While that likely won’t be enough to beat a team like the top-seeded Philadelphia 76ers in a best-of-seven series, it absolutely will be a factor going up against a relatively even matchup like the Hawks.

Not to mention the fact that while Randle may be a middling-efficiency isolation player, Burks and Rose are both top-10 percentile isolation players. With both of them constantly attacking, Quickley’s mega-deep three-point shooting, Obi Toppin’s newfound confidence, and Bullock’s consistent sniping, the lanes should be open for Randle and Barrett to play their unique brand of highly skilled bullyball.

As much as we’ve celebrated the Knicks this season as a team redeeming itself after years of being a laughingstock, it’s important to remember that this is a redemption year for Thibs as well. His reputation as a coach took a hit after his tumultuous time in Minnesota, and he chose to try to turn it back around in one of the most scrutinized and unforgiving markets in the league.

The Knicks are a feel-good story this season, but this is the first real test for whether Thibs deserves to regain his position amongst the coaching elite or not. If he wants to do that, he’s going to need to be ready to adapt, change rotations, and ensure Randle continues the All-NBA level style of play he’s shown all year.