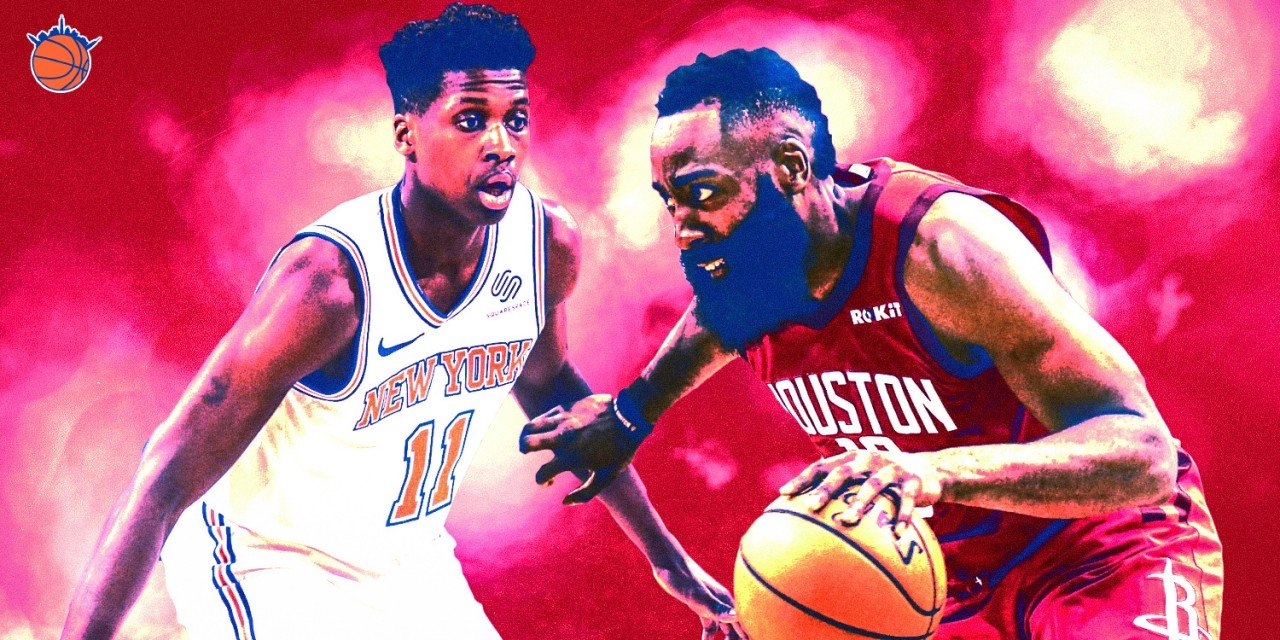 James Harden is one of the league’s most difficult players to defend. How did Frank Ntilikina do it?

James Harden averaged 31 points per game during the Rockets’ latest playoff run, and 34.8 points and 5.5 assists in the Conference Semifinals against the Golden State Warriors. It took, arguably, the most talented team of all-time and an absurd showing from three of their all-stars—with Curry scoring 23 points in the fourth quarter—to defeat the Rockets.

What do the normal teams without four all-stars do against a player averaging 35 and 5? Defensively, you have to scheme for James Harden, whose absurd efficiency on the toughest shot in the game has made him as unguardable a player that we’ve ever seen. This past regular season, he averaged 36.1 points per game on 61% true shooting, to go along with 7.5 assists per game. Offensively, he was able to do anything he wanted.

A common tactic used against Harden was to cut off the left side of the court and force him to dribble with his right, less effective, hand. The Portland Trailblazers used this tactic in the 2014 playoffs, and the Spurs and Bucks have also done it. Milwaukee took this strategy a step further, forcing their primary defender to stay behind his left shoulder, cutting off his step back jumper and forcing him to create with his weaker hand. The Bucks won this game, as Harden shot 9-for-26, and buzz circulated on a possible blueprint for defending the league’s deadliest offensive weapon.

The Utah Jazz, one of the best defensive teams in the league, tried this same technique against the Rockets during the first round of the playoffs, yet they still lost in five games. The reason was simple—2019 Harden isn’t the player he was against the Blazers in 2014, or even against Golden State last year. Those tactics aren’t going to work in a series.

While the Bucks gained praise because they did something drastic, Harden’s lowest scoring night of the season came against the Jazz on December 6th, where Utah didn’t employ any outlandish techniques, but played their usual tough and smart defense. Maybe it is better to attack him straight-up defensively—just stick your best defenders on him and hope to stop one of the things he’s good at. But what defender can bother James Harden?

Defending James Harden the Bucks’ way requires a full team effort. The 2018–19 New York Knicks were not a full team, so David Fizdale decided everyone on the team would take on that challenge individually. Unsurprisingly, this did not go well. Harden scored 61 points, which guided the Rockets to a win at Madison Square Garden. Almost every person tasked with defending the Rockets’ shooting guard failed miserably, except for Frank Ntilikina. Let’s look at how he was effective.

Usually when the Knicks are used as an example for the rest of the league, it’s to demonstrate what a team shouldn’t do. Yet the Knicks’ sophomore point guard showed the league how to slow down the perennial scoring champ.

Harden shot only 1-for-6 with four turnovers when Ntilikina was the main defender. Ntilikina’s impressive defensive game was personified on this possession:

Harden was fouled on 11% of his three-point attempts this past season. He was fouled four times behind the line in that game alone (none by Frank). He’s impossible to guard because if you’re too close he will flop or extend his legs or arms in order to get a whistle, but if you are too far away, then you’re leaving one of the great shooters the league has ever seen wide open. Frank had to try something different.

Ntilikina was conscious of how close each part of his body was to Harden, often staying more to his side while keeping his hand in front of Harden’s face. Positioning was a key part of his defense the whole game, as he managed to bother Harden enough to make him miss shots that he normally makes, while remaining far enough away to avoid foul calls.

Frank then used similar positioning on another three-point attempt by Harden.

After Harden drove on Frank earlier in the game, Frank was cautious of that threat. Harden used it to his advantage in the move below:

While keeping his distance, Frank made sure to cut off any attempt to the paint. Although he was led by Harden’s fake, Frank was never too far. Still, he has the ability to cover the small distance with an absurd wingspan. He used his hand not to swipe at the ball, but to keep his hand in front of Harden’s face, blocking any view of the basket.

Let’s look at his defense on a Harden drive:

Even on the only basket that Harden was able to score against Ntilikina, the effort to contest without fouling was still there. Harden got zero space until he was right at the rim, yet other Knick was aware that Harden put his head down, only focused on the hoop. There was no one at the rim to meet him, resulting in two easy points for The Beard.

Frank’s greatest defense came at the end of the third quarter, as Harden attempted a three to send the Rockets into the final quarter with momentum and a large lead.

Harden looking for space in that game was like my cat trying to run out the front door whenever it is slightly open. Frank’s hands constantly bothered Harden’s attempts to dribble past him, and Harden was aware, as he pulled up quickly trying to get to the line on another three-point attempt. However, Frank’s hands were up by that time, resulting in a rushed and terrible shot. It’s clear that Frank was aware of the time winding down, and knew Harden would wait until the last second. He did his best to keep him far behind the line, while also keeping his hands up as the buzzer wound down.

Ntilikina’s intelligence was on display, even on off-the-ball defense.

One of Harden’s moves to get space is a little push on his defender, and it rarely gets called. As Frank bothered him more and more, the push-offs became increasingly noticeable:

The refs may not have seen this develop, but Frank certainly did. The next time it happened, Frank got into a better position to make it more obvious, and he exaggerated the contact in order to get the Knicks the ball again.

What’s the best way to keep Harden from scoring? Don’t allow him to get the ball.

The Knicks came out with no game plan against a thriving James Harden and the Houston Rockets, but were able to keep a close game throughout the night due mostly to Trier’s 31 points and Ntilikina’s suffocating defense on the Rockets’ only offensive force.

How many defenders have the intelligence to understand both what their opponent wants, and the physical tools and athleticism to stop him?