How Hiring Tom Thibodeau Would Affect the Knicks’ Young Players

Ex-Bulls and Wolves coach Tom Thibodeau has been heavily linked with the Knicks for his next NBA gig, but how will he impact certain players?

Tom Thibodeau’s reputation in the NBA is interesting. His name carries weight, but he comes with heavy baggage.

Some of his accomplishments include winning Coach of the Year in his first season as a head coach, helping Derrick Rose win Most Valuable Player and Joakim Noah win Defensive Player of the Year, and turning Jimmy Butler from a fringe NBA player into a perennial All-Star candidate. Some of his shortcomings include bungling a situation in Minnesota with Karl-Anthony Towns and Andrew Wiggins and the inability to adapt to certain playing styles.

But with rumors linking Thibodeau to the Knicks, one can only wonder how he will affect the Knicks’ rebuild going forward. For better or worse, Thibs brings a certain coaching style with him. His short rotations and rigid substitutions help some players flourish while others are left out to dry.

While central organizational pieces flourish under Thibodeau, those left to the margins are often neglected. This could be the boost toward stardom R.J. Barrett and Mitchell Robinson need. Barrett could develop as a playmaker and improve as a defender while Robinson could finally be afforded opportunities to stay on the floor longer that, for reasons that truly elude me every day, he was not provided this year.

This practice could, however, spell trouble for the other young Knicks who are still trying to prove themselves. This is the minutes per game breakdown of the 2016–17 Timberwolves, a team that went 31-51 (roughly the record that the Knicks were on pace for had Mike Miller been at the helm the whole season): 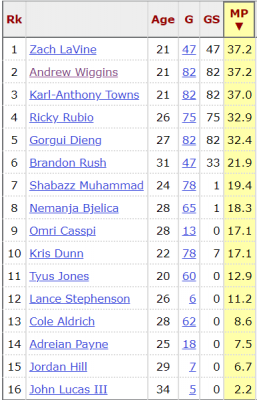 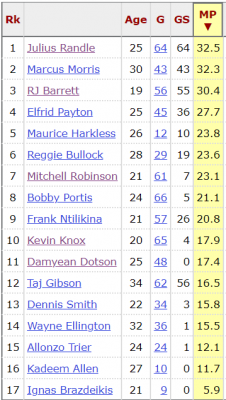 Even with a middling team, Thibodeau has his starters that he trusts, his rotation guys who see some action, and little room for anything else. Based on what we saw this year, I cannot imagine Dennis Smith Jr. would make his way onto the floor much under a team led by the former Wolves caoch.

Ntilikina and Knox ranked ninth and 10th in minutes a game on the Knicks this season, respectively (ahead of them are both Maurice Harkless and Marcus Morris Sr., so they really finished eighth and ninth but both finished ahead of Gibson, who started all but six games; what a weird team). This is right on the edge of where Thibs’ rotations traditionally have ended. Thibs is not known for bottoming out, so if there is someone who can do Ntilikina or Knox’s job better behind them, the young players would risk falling out of the rotation altogether.

Both Ntilikina and Knox were drafted as incomplete players, and both have been inconsistent to maddening degrees. Not being able to count on consistent minutes night in and night out would be problematic for both players. Some of the last things the Knicks should want is Ntilikina being too passive offensively and Knox being afraid to put the ball on the floor.

Ntilikina, 21, and Knox, 20, both came in as projects, and while neither of them have made the leap yet, they both have showed that can improve when they are afforded minutes. While Ntilikina fits the mold of an ideal Thibs player, bringing in a coach that could jeopardize both his and Knox’s minutes would be counterproductive to the last three years of rebuilding.

Let’s not treat Thibodeau like he would come in and lay waste to the Knicks organization, though. Thibs is not necessarily the one-trick, defensive pony that most assume he is. While it is true that the Bulls finished in the top six in defense from 2010–14, his Timberwolves teams finished no higher than 24th in defense while finishing 10th in ORtg in 2017, fourth in 2018, and 11th in 2019.

If you want someone who can really get everything out of what you have on your roster, Thibs is your guy. Barrett and Robinson are the most valuable assets that belong to the Knicks, but it is still not clear what either player will be in five to six years.

Questions abound about the two young players. Can Barrett really be the motor of an NBA offense? Or will his poor shooting, subpar playmaking, and lack of elite quickness plague him throughout his whole career? Will Mitchell Robinson ever be a threat to do anything outside the paint? Will he ever be able to take a dribble and find an open guy? (Robinson tallied fewer than half as many assists as Portland’s Hassan Whiteside did this year.)

Thibs might not be perfect, but he helps hard-working players achieve their ceilings. Jimmy Butler is a good example of this. He appeared in 42 games as a rookie, starting in zero. He appeared in 82 games the next year, starting 20. By his fourth season, he was an All-Star.

Perhaps another coach, namely Kenny Atkinson, could help Barrett and Robinson achieve their ceilings while simultaneously further developing Ntilikina and Knox. Many people see Atkinson as the right man for the challenging Knicks job, and he may well be, but his winning percentage as a coach in 3.5 seasons is .383. Thibodeau’s through 7.5 seasons is .589.

The sample size for Atkinson is actually quite small given the way people talk about his track record. There are factors about both candidates that need to be considered. Thibs has coached numerous All-Stars. In 2019, Atkinson’s most successful season, the team was ideally constructed to spread out and run approximately one million D’Angelo Russell pick-and-rolls per game.

Thibodeau has the longevity and results to show that he can be an extremely productive coach in the NBA. His body of work allows us to draw the conclusion that he can effectively get results out of his best players, while his fringe players may suffer.

The good thing about the way the Knicks are set up for the next few years is that Ntilikina and Knox should still have every chance to prove themselves. Ultimately, if Tom Thibodeau is hired as the next head coach of the New York Knicks, it is likely to the benefit of R.J. Barrett and Mitchell Robinson, while we will really see what Frank Ntilikina and Kevin Knox are made of.