How the Knicks Can Break Mitchell Robinson’s Struggles 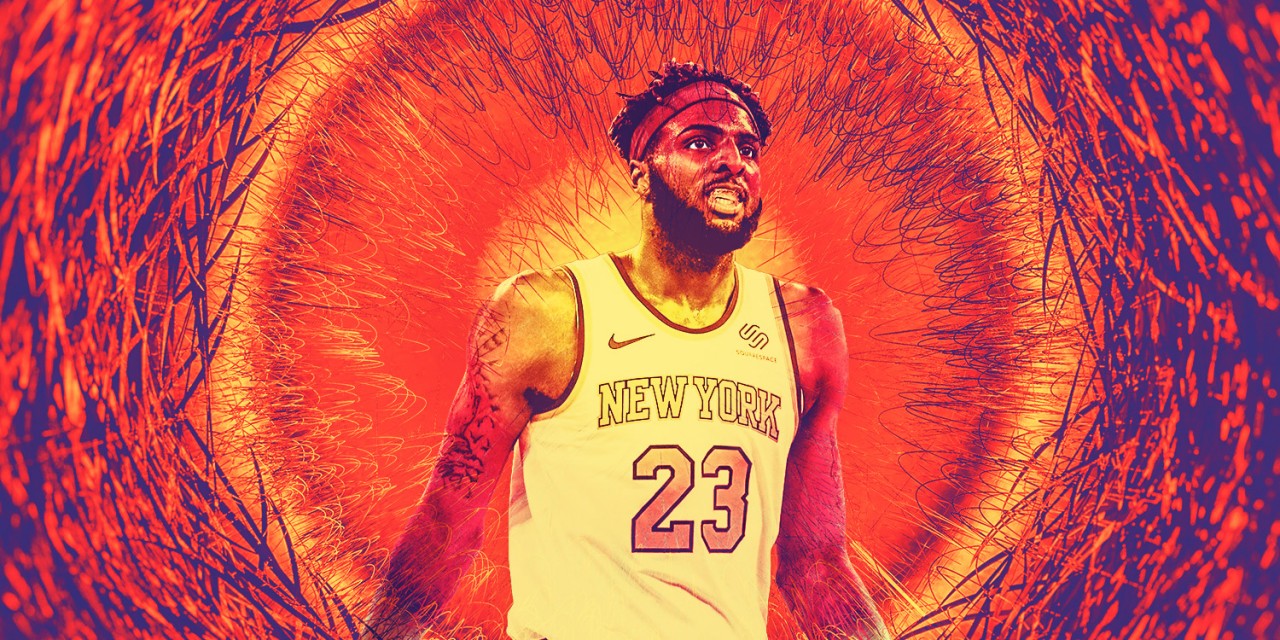 Mitchell Robinson was a bright spot last season for the Knicks as a second-round steal. He still has parts of his game that need work.

The 2018–19 New York Knicks were terrible. They were like a car driving off a cliff. Everyone watching knew it would end horribly but chose to keep watching anyway.

Mitchell Robinson was the lone person trying to steer the car away from the end of the road. The 20-year-old rookie was Dikembe Mutombo reborn, a 7-foot-1 robot made in a factory with the sole purpose of keeping any opponent’s shots from coming close to the rim.

With the qualifier of playing at least half the season, Robinson is only the second rookie to ever average a block percentage over 10%, while also being the only rookie to ever have a True Shooting percentage over 68%. It’s obvious he had an immediate impact on a terrible Knicks team. Unfortunately, he also averaged 5.7 fouls per 36 minutes, so he would probably foul out of every game if David Fizdale tried to play him consistent starter minutes. Rookie big men foul. It’s normal. For Robinson to grow into the defensive anchor he flashed signs of becoming during his sensational rookie campaign, he would need to stop constantly sending the opposing team to the charity stripe.

As a sophomore, Robinson is expected to bring a lot more to the table. Unfortunately, he continues to bring fouls: his fouls per 36 minutes has gone up to 5.8, and he has fouled out of four games along with five fouls in three games. This equates to him either fouling out or being extremely limited due to foul trouble in 36% of the games he’s played this season.

In order for the best version of Robinson to shine through, there has to be two major adjustments: one to the Knicks’ playing style and the other to Robinson’s habits.

Teams with strong rim-protecting big men scheme to funnel slashers directly into the big man waiting in the paint. The rest of the team can focus on cutting off the weak side of the court. Slashers cannot kick the ball out or change direction since there are two players on both sides. Their options are to shoot a floater or attempt at the rim. This is how the Jazz have been second in defense the past two years.

Instead of planning a defensive scheme to maximize the strengths of the Knicks’ most important young players, now-deposed head coach David Fizdale somehow devised a system that maximizes Robinson’s biggest weakness. Even when there is no reason for it, the Knicks switch on screens and are over-aggressive with their help when players drive past the three-point line; a system that limits mid-range shots but allows wide-open threes with an easy pass.

Do the Knicks even have an analytic department or someone who understands that three is greater than two? It’s obvious that allowing triples is part of New York’s defense: The Knicks allow the second-highest three-point percentage and the third most threes made per game.

Robinson struggles in this scheme because he has too many responsibilities: trying to protect the paint as well as stop wide-open attempts from beyond the arc. It’s hard to put yourself in a good position to block a shot when you’re constantly sprinting to cover the open man.

Flipping this plan to decrease opponent’s attempts beyond the arc and increase attempts below the three-point line and at the rim would dramatically change Robinson’s play. The 21-year-old is at his most devastating when he has established footing. The Knicks are treating an elite shot-blocker like just another player on the roster. While the sophomore may not be ready for it, the Knicks need to try to gameplan with Robinson as their defensive anchor and put him in situations where he can be at his best to succeed.

Mitchell Robinson currently has the highest block percentage in the league. While this is a great personal stat, his desire to block every single attempt limits his and the Knicks’ overall effectiveness on the defensive end. Despite the high blocking percentage, Robinson is only eighth in blocks per game because he cannot stay on the court for more than 20 minutes!

It doesn’t matter where on the court, if someone on the opposing team is attempting a shot, Robinson will try to spike it back into the ground. While his fiery competitiveness is a welcome change from the general disdain that most of the roster has for anything beyond personal stats, not every shot needs to be swatted. Rim protectors can capitalize on their ability to block shots even when with their arms simply raised above them; when playing the Jazz, teams only shoot 25% of their shots at the rim, way below the 30% average.

Being a good defender is more than just being able to smack away the opposing team’s shots. It’s knowing when to block, when to simply put your arms up, or when to not use your arms at all. Right now, Robinson is jumping into everything, which includes players’ bodies. Even at only 21 years old, he is one of the most important players on the roster, so he needs to stay on the court even if it means reducing his most known skill.

While Robinson does not have the same reputation as the reigning Defensive Player of the Year, teams will still be bothered by Robinson’s length. Simply keeping his arms high instead of extending them to smack at the ball could mean a world of difference for Robinson’s ability to stay on the court. While not a recorded stat, Robinson’s presence should cause players to over-think and possibly not shoot at all. This is worth even more than a block.

Mitchell Robinson has been disappointing to start the season due to his lack of restraint on the defensive end. While the Knicks have not put the young big man in an opportunity to succeed, he needs to learn from his mistakes and have more gritty defensive possessions that stops the offense without attempting to deflect the ball.