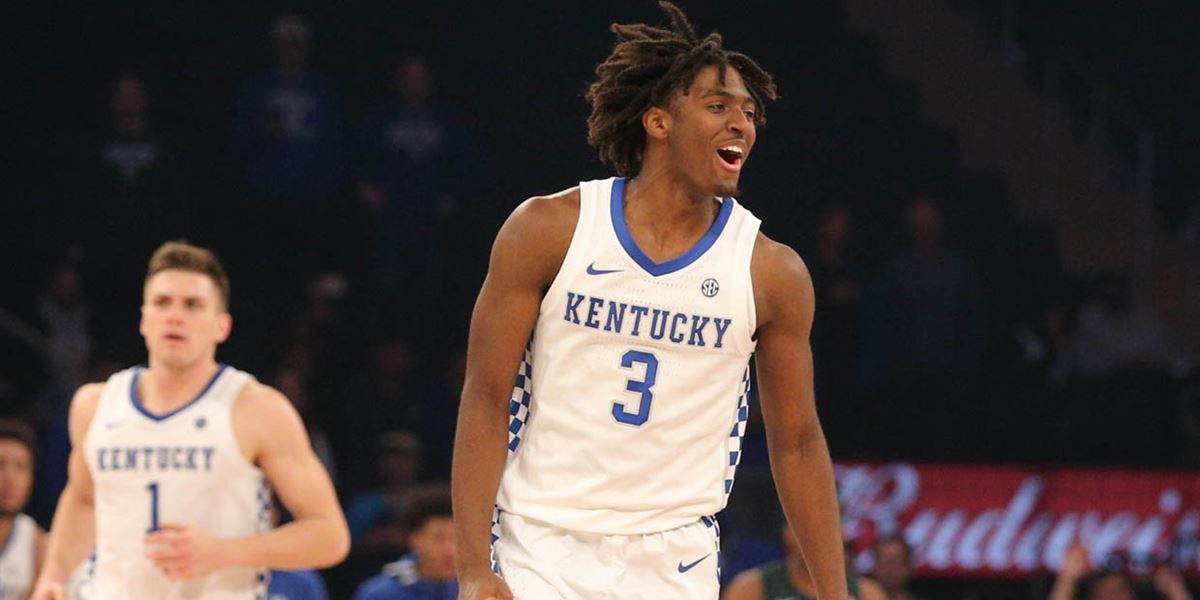 A recent report from the New York Post indicates the Knicks possessing interest trading back at the NBA Draft, giving them more options on the trade.

The season is over, but the news never stops. According to Marc Berman of the New York Post, the New York Knicks are considering moving down from the eighth overall pick in November’s NBA Draft unless Memphis center James Wiseman or former NBL point guard LaMelo Ball are on the board. The Knicks currently hold three draft picks in the 2020 NBA Draft, with all three selections falling within the first 40 picks.

On the surface, it makes sense for this front office to cross all their T’s and dot their i’s. If a team is interested in moving into the top 10, the Knicks should listen and see what they can get. Rumors swirled about new head coach Tom Thibodeau’s interest in Auburn forward Isaac Okoro; this move would certainly eliminate any chance of that.

However, the intrigue in Kentucky guard Tyrese Maxey makes sense for New York. He has great size for a point guard at 6-foot-5, he’s a good defender and shot 65.1% at the rim last season for the Wildcats. There are some issues, highlighted by his poor three-point shooting (29.2% last season), but would be an interesting developmental prospect in the middle of the draft. He’s a reach at eight overall, which makes sense if New York wants to move back and acquire him.

While the Ball interest is well known at this point, the conviction and intrigue around Wiseman is worrisome and says multiple things about the direction of the franchise. Twelve months ago, Wiseman was the top high-school prospect and was viewed as a one-and-done college athlete. While he did leave Memphis after one season, he did so playing just three games, finishing with averages of 19.7 points, 10.7 rebounds, and a staggering 70.4% from the field.

The Wiseman tidbit suggests two things: the Knicks could be swinging for the fences in this draft and that they might not be married to the idea of extending Mitchell Robinson. But that is a discussion for another day, let’s talk about the prospects behind trading down.

In the same piece, Berman mentioned that the Knicks could look to move back into the 12-15 range and add another player on his rookie contract to add to the roster. A wise move, similar to what the Phoenix Suns did last offseason, trading the sixth overall pick to Minnesota for the 11th overall pick and Dario Saric. Minnesota took Jarrett Culver with the sixth pick, while Phoenix acquired Saric and added sharpshooting forward Cameron Johnson at the end of the lottery.

Is there an opportunity like that for New York? Let’s take a brief look here at some potential options.

San Antonio Spurs: Lonnie Walker and the 11th pick to New York for the eighth pick

While the piece suggests the “12 through 15” range, I’d be remiss if I didn’t mention the Spurs, who match up as a great fit with New York. San Antonio has a fascinating roster—a gluttony of guards on rookie contracts, LaMarcus Aldridge, and DeMar DeRozan as veterans, and an uncertainty of when the Gregg Popovich era will reach its end. It would be interesting if New York can snag someone from the Spurs and still remain in the top 12.

Walker makes a ton of sense. Selected two years ago, Walker began to crack Popovich’s rotation last season with his combination of shooting and athleticism. A 40.6% shooter from three-point range last season, the 21-year-old would be a great add to New York’s wing rotation.

New Orleans Pelicans: Nickeil Alexander-Walker and the 13th pick to New York for the eighth pick

After piping New York to Zion Williamson last offseason, could the New Orleans Pelicans work with the Knicks as trade partners this offseason? This makes sense for both sides—New York could add another young talent, while New Orleans quietly has a few big financial decisions to make over the next two years in Brandon Ingram, Lonzo Ball, and Josh Hart.

This might be a tough sell to New York, as Alexander- Walker struggled last season to the tune of 36.8% shooting from the field and 5.7 points per game. However, Alexander-Walker’s per-36 numbers offer a glimpse into the kind of player he could be with proper development—5.1 rebounds, 5.4 assists and 1.0 steals last season. Combine his versatility with some modest shooting (34.6% from three last season) and you have the makings of a do-it-all wing who could help New York’s roster.

The Celtics are great at drafting players and similar to New Orleans, have some big contracts coming up. New York should force Boston to overpay in this scenario, but the idea of Boston using their future assets to move up and grab a point guard, someone who can serve as Kemba Walker’s understudy while New York being the benefactor of said assets returning back makes some sense. New York would have to make this deal hurt a bit for Boston, though.

Grant Williams is the type of players you find on a winning team and even though he didn’t play well as a rookie, his per-36 numbers, 8.2 points, 6.1 rebounds, 2.3 assists, 1.0 steals, and 1.2 blocks, suggest that he can be a good player in the very near future. At only 20 years, Williams’ combination of skill and basketball I.Q. would be a refreshing addition to a Knicks roster who could use a versatile player in his mold. If he learns how to shoot, Williams could be a starter and an impactful one pretty quickly.

The 2020 NBA Draft is still a month away and the Knicks are making sure they do all their homework before deciding on their approach. While you can’t blame them for that, someone of the names seems dubious. Interest in James Wiseman doesn’t make much sense when you have a cheap center that you can extend on a below-market rate. Tyrese Maxey is a nice option, but is he worth giving up the chance to add someone like Florida State’s Devin Vassell or France’s Killian Hayes?

Time will tell, but the Knicks are making sure the first draft pick of the Leon Rose era is a successful one.

»READ: Kentucky guard Tyrese Maxey is worth keeping tabs on