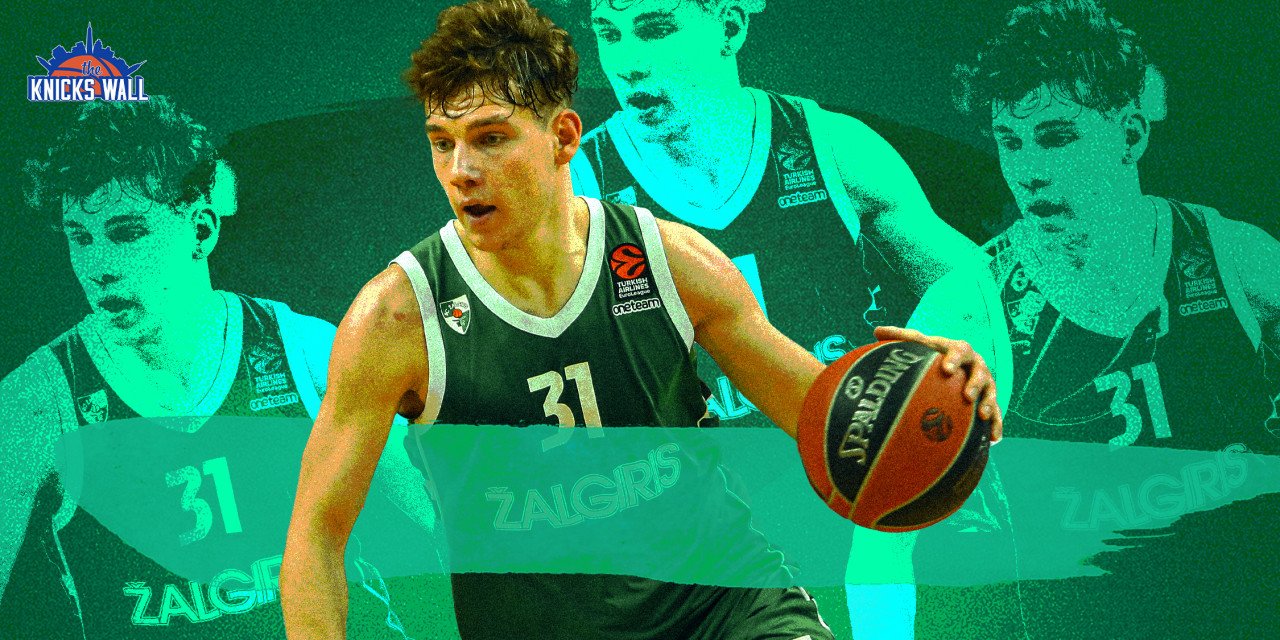 An afterthought following solid rookie showings from Quentin Grimes and Miles McBride, could Knicks stasher Rokas Jokubaitis make the jump from EuroLeague to NBA next season?

Stop me if you’ve heard this before: Eastern European hooper making waves in an overseas postseason causes excitement and skepticism to ripple throughout the basketball world. A tired, if not exhausted trope if I’ve ever seen one; ideally, we’re beyond the days of the fans at home screaming “WHO DUH F–K EZ DIS” at their televisions when their team drafts an international talent early in the NBA Draft’s first round.

Well, what if I told you that said Eastern European hooper will likely end up playing for the New York Knicks next season?

Your ears are perking up. I had a feeling they might.

No, Luka Doncic isn’t coming to Madison Square Garden in September—not as a Knick, at least. Also, you can stop quivering. I promise, the days of Kristaps Porzingis are long in the rearview, even if his slight resurgence in Washington might be cause for some regret from New York’s front office of yore. Instead, the Knicks will aim to welcome in a fresh international face next season, one who they’ve had waiting in the wings for the better part of a year, since acquiring his draft rights in 2021.

The mystery player in question is Rokas Jokubaitis, the Lithuanian guard currently playing for FC Barcelona in the EuroLeague, and at the moment, happens to be leading them through the postseason. (At least one member of the New York Knicks made the playoffs, right?) Selected early in the second round in 2021 by the Oklahoma City Thunder on behalf of New York, he spent Summer League with the Knicks but then spent the following season with Barcelona.

The club—one of the premier teams in the EuroLeague—boasts a good bit of former NBA talent, with the likes of Nikola Mirotic, Dante Exum, Nigel Hayes, Cory Higgins, and Nick Calathes, among others, all receiving run aplenty last season. Ultimately, this resulted in Jokubaitis having difficulty making a significant footprint this season, despite making the leap from Zalgiris to Barcelona. He averaged a mere 7.3 points, 1.7 rebounds, and 2.7 assists in 16.9 minutes per game in 27 appearances this season. But the EuroLeague can also be… weird. Players don’t necessarily explode for big numbers like they do in the NBA. Even the most elite talent, like the aforementioned Doncic, will produce “middling” numbers; when Doncic won Euroleague MVP in 2017–18, he averaged 16.0 points, 4.8 boards, and 4.3 assists per game on somewhat inefficient 45-33-82 shooting splits. That Jokubaitis didn’t have the numbers to make a quantitative impact doesn’t mean as much as the qualitative feel of his better flashes.

From a general standpoint, Jokubaitis is a poised point guard with respectable, shifty scoring chops and a passing ability that could see him slot directly into an NBA rotation right now. Despite averaging just 2.7 assists per game last season, his best passes set up his teammates seamlessly as opposed to making them perform extra work for a shot. He hits them directly in their shooting pocket or on the run; some of his better moments come on the break, where Jokubaitis surveys the floor like a side-to-side lighthouse beacon, only 55 times quicker.

He’s a European lefty, so the natural comparison has to be Goran Dragic. Not only is Jokubaitis’ shooting motion somewhat similar to Dragic’s in speed and purity, but he’s as shifty as prime Dragic was, too. While Dragic was hardly weaving his way through defenses like a scythe through a wheat field, he was crafty, dribbling enough to find a great shot or dump pass option, but not too much.

Remarkably, Jokubaitis rarely turns it over—just 1.3 giveaways per game, regardless of his frequent touches and his incessant energy on the offensive end. Some of his passes can border on erratic and dangerous—of the games and highlights I watched, I found more than one occasion on which Jokubaitis attempted to thread a pass through his opponent’s closed legs, which, not great—but more often than not, he’s composed and direct with his ball movement. The word that might fit his play the most? Purposeful. He would sooner pull the ball back out than force up a leaning layup over tight defense, a shot he can (and does) make quite often.

And yet, there is concern when it comes to his shotmaking against elite athletes, particularly those that are broader and stronger than the lean Jokubaitis can beat. His high I.Q. is one thing, an advantage that he might have over most average NBA defenders. But he’s while not unathletic, he’s not exactly explosive either, and his deep ball leaves plenty to be desired. His release isn’t as quick as Dragic’s is—it’s methodical, almost molasses-like on occasion. On a team that lacks pure scorers like the Knicks do as presently constituted, that would make him a problematic perimeter fit.

Offensively, I might liken him a bit closer to a less athletic Kevin Porter Jr. or Tomas Satoransky type—the kind of player that can pass and create their own shot but sometimes falls into the trap that comes with being less dexterous than the opposition. His finishing ability and confidence as a passer more than make up for any of those detractions, though, and though I mentioned it already, you literally can’t say enough about his I.Q. on the offensive end.

Defensively, he’s a bit more of a mixed bag. He plays above his size, which helps his defense at the rim. And he has an Alvarado-esque acumen in the passing lanes (I just love that I can make that comp now, even if it’s semi-forced). But he has difficulty fighting through screens due to his slighter build, and when a shot goes up, he fails to focus on boxing out, almost as though he’s thinking about the pass he plans to make before he pulls down the rebound (he often doesn’t). But again, in the passing lanes, and in the backcourt, he’s a fiend.

That sort of offensive boost and defensive irritant is something the Knicks desperately need in their backcourt… today. On top of that, he’s already embracing the New York vibe: Back in January, he told Eurohoops that he likes to read things about him that are “more negative, not positive.” Additionally, he noted, “Every time someone asks what I have to improve, is making decisions with the right hand, three-point shooting and defense. If we are talking about NBA—and EuroLeague of course—it’s physicality, speed, shooting. When I think about it, these scouts are right.”

It’s imperfect, the idea of stashing a draft pick and not allowing them to immediately make an impact or an impression on the NBA level. Players like Doncic, Porzingis, and Alperen Sengun bring excitement upon arrival, whereas prospects like Jokubaitis and Boston’s Yam Madar inevitably draw criticism preemptively. But there’s plenty for the Knicks to love about Jokubaitis and plenty that he can bring upon arrival.

So, for a second, forget the fears that come with a draft-and-stash player, and relish in the idea of a new face in the backcourt, one that can bolster the Knicks gameplan on both ends. There’s risk, but there’s reward aplenty, too. It’s worked for plenty of teams in the past. Perhaps, for once, the Knicks are next.