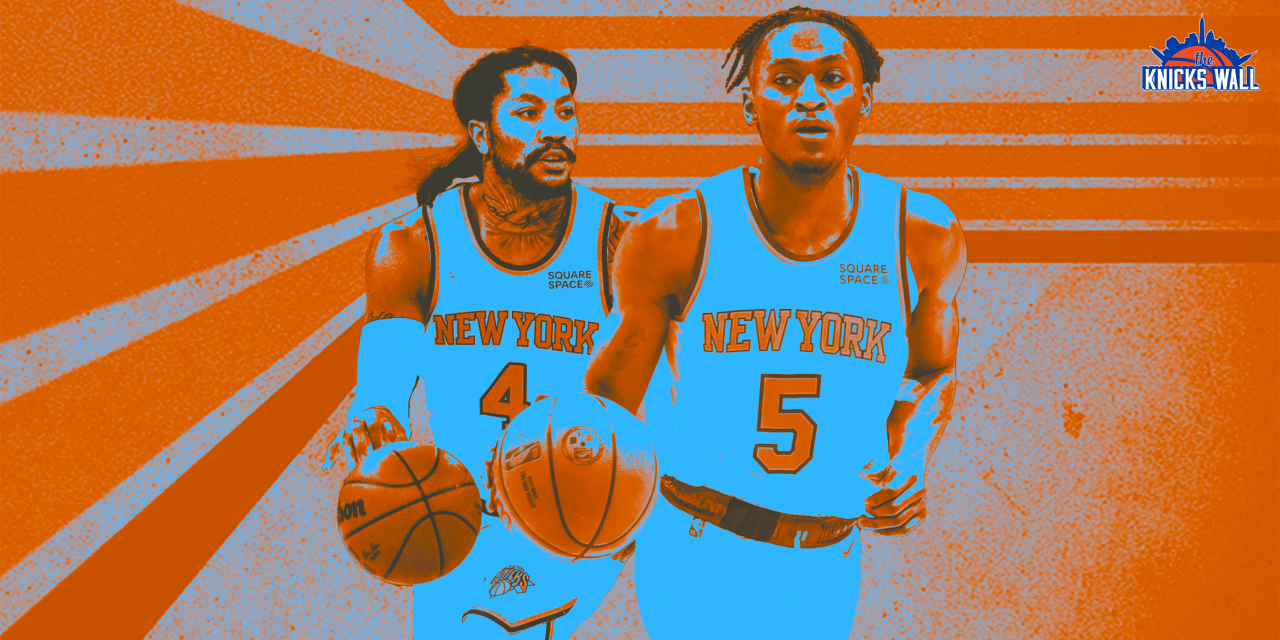 The Knicks seem to be running back the roster of young players and older veterans. This dynamic could still prove to be beneficial if the youngsters develop some of the skills of their elders.

It’s no secret that the New York Knicks have veterans that lean on quite a bit to play heavy minutes. It’s a given, considering that their head coach Tom Thibodeau would rather see the wheels fall off of his 30-something-year-old bench options than provide an opportunity to the younger ‘Bockers at his disposal.

Even with the great promise shown by guard Immanuel Quickley, for example, Thibodeau opted to start Alec Burks at point guard despite Burks being better suited as a spot-up shooter in the backcourt instead of as a facilitator. In the month of April alone, Quickley averaged 20.0 points per game along with 8.8 assists while shooting 40.9% from the field. These eye-popping stats came only after Thibodeau opted to give him more minutes with the season finally coming to a close with no playoffs, or play-in, in sight.

With Mitchell Robinson, the story is a bit different. Robinson has been the de facto starting center for New York for the last three seasons, but injuries kept him sidelined for much of his first two go-arounds with the team. This past season, he stayed healthy throughout and was solid on both ends of the floor. Robinson ended up averaging 8.5 points per game along with 8.6 rebounds and 1.8 blocks. He looked especially good with an actual point guard, like Quickley or Rose earlier in the season, on the court aside from him for pick-and-roll action. Without them, he often clogged the paint with Julius Randle opting to handle the ball primarily.

Alas, with Thibodeau expected to return next season with the same roster of both young guns and veteran role players (barring any major trades prior to the regular season’s kickoff), we could see some benefit come of those more seasoned players providing help to players like Quickley and Robinson on how to improve in some weaker areas of their game.

With Quickley, the biggest knock against him is his ability to drive to the basket and finish. While his three-point shooting can be lethal at times, it can feel like he falls back on that or his signature floater because he is not comfortable with finishing in contact at the rack yet. Enter the former Most Valuable Player on the Knicks’ roster, Derrick Rose. Rose is known as a savvy cutter on the court, and it feels like he is able to get anything he wants when he’s on the floor and in the paint. He has the ability to score through contact, but in his later years has opted to work on his three-point shooting to alleviate the more knee injuries.

Rose and Quickley spent time last season together as a backcourt duo off the bench for Thibodeau, and they played very well off of each other. So well, in fact, that it was almost expected that once the Knicks’ bench entered the game, it’d actually become competitive. Their actual starting backcourt of Evan Fournier and Kemba Walker, then Fournier and Burks, were often slow to start games. But, since Rose was the true point guard between the two, he’d often facilitate to Quickley, who was always a risk from long range and from midrange if he was able to get a floater off.

Quickley could definitely model more of the explosiveness that Rose had in his earlier years in the league around the basket. His floater is solid, but defenses can easily pick that apart. If IQ wants to begin to separate himself from the pack, he should start to work on that skill. Last season, he only attempted shots less than 10 feet from the rim 22.5% of the time compared to taking 58.6% of his shots off pull-up jumpers, most often from three-point range. Comparing this to Rose’s 2020–21 season, when he played more significant minutes, where he averaged 42.9% of his shots from less than 10 feet, you could see how a reversal of Quickley’s thinking on offense could serve him well while playing alongside Rose. A larger diet of shots at the rim could serve him well entering year three with the Knicks as defenses begin to learn his mannerisms on the court and what his shot chart looks like on an average basis.

With Robinson, a player he could look to improve his game in the post is Taj Gibson. Gibson has a hook shot in his arsenal while also being a surprising threat from deep. Robinson tends to practice his three-point shot in the offseason but has yet to attempt a shot from deep during the regular season. He is an extremely effective cutter and a problem on defense in the paint but does not have much of a post-up game. He tried to use his weight to get more strength down low, but it ended up hindering his athleticism instead.

Robinson barely dribbled when catching a lob, obviously, or cutting for a finish at the rim, and he ended up averaging 90.9% of his shots off of zero dribbles. Gibson, on the other hand, had a pretty even distribution of how he managed to score in the paint. He averaged 56.4% of his shots off of zero dribbles, and 14.7% of his shots off of one. Those often came in the form of backing down a defender in the paint with ease or taking a pretty short-range jumper. Robinson does not have much of a game outside of being right at the rack to catch a pass and could use some tips from Gibson to really open up his scoring. Gibson is able to create his own shot, although he doesn’t do it too often.

The point is, though, he has it in his arsenal, so he’s never trapped as often as Robinson in the paint against a double team or against another physical center. Robinson was, and he ended up averaging almost one turnover per game because of it. If he were to pick up some of the skills that Gibson has acquired like some shooting from mid-range or a hook shot, he would instantly become a force and less of a clogger in the paint.

This is all, again, assuming that Gibson or Rose, or both, are not shipped off in some mega trade cobbled together by the Knicks’ front office. If they aren’t, then New York can truly utilize their vets in a meaningful way without the need to play them for double the time that they play their younger, developing players.