How Mitchell Robinson Can Take His Game to the Next Level 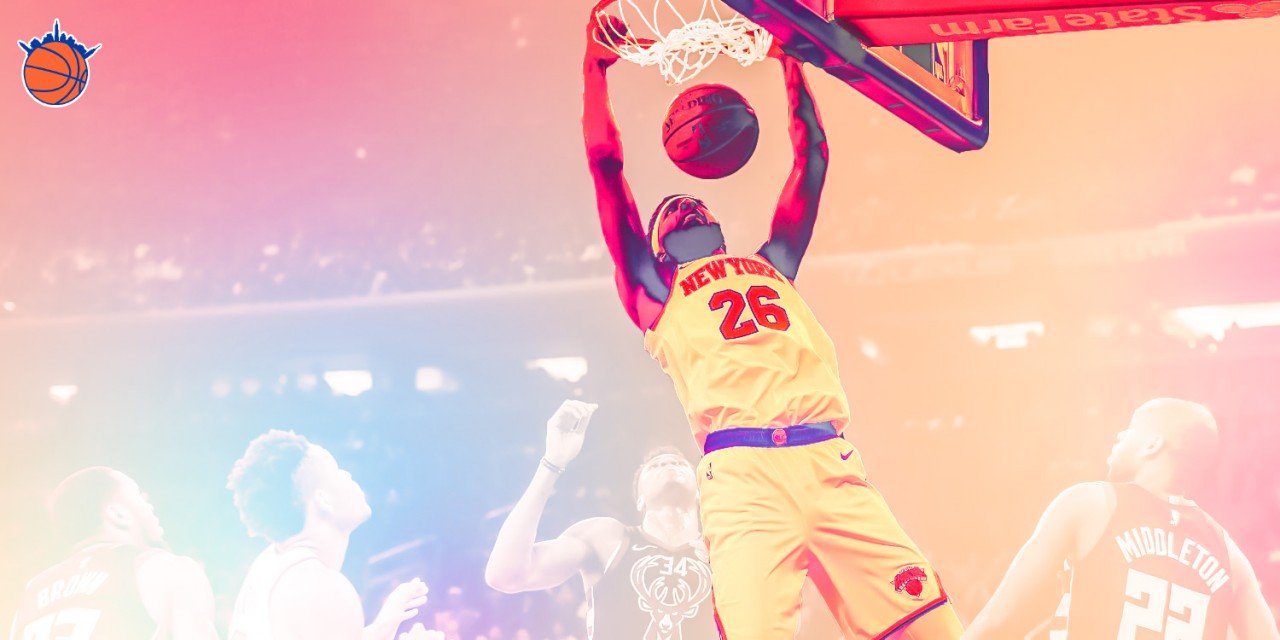 Mitchell Robinson has clearly installed his name as the next big building block for the Knicks. Here’s what he needs to work on to refine his game.

The Knicks are bruised and battered at the end of this horrifyingly terrible season.

They stand to lose more than 60 games and a handful of their prospects, rookies and sophomores, have gone down during the final stretch. Frank Ntilikina has been ruled out indefinitely, presumably for the remainder of his awful sophomore season, while Kevin Knox and Allonzo Trier are questionable to close out their rookie campaigns.

Yet, standing tall and talented with the arrogance to break rookie record after rookie record on a damn near nightly basis is Mitchell Robinson, New York’s second-round selection in 2018. Robinson wasn’t intended to be a centerpiece, but with his strong play and increasingly exciting potential it’s looking a lot like he’ll be in the conversation.

When it comes to rookie performance this season, Mitchell Robinson is at the top. Although Knox had the benefit of winning the Eastern Conference Rookie of the Month award in December, Robinson’s injury in the same month served as a springboard for the rest of his campaign.

The last game Robinson played in which he didn’t have a block by the end of the night was on December 12th. He missed 13 straight games and is still top five in total shots blocked. Plus, of those five, he has the highest field-goal percentage at a whopping 68.2 percent. In his limited 19 minutes per game, that’s beyond impressive.

Let’s cool our jets—a high field-goal percentage for a rim runner scoring 6.7 points per game is to be expected. But his standings in his draft class were not.

Robinson may not have been a first-round pick, but he sure as hell is playing like one. Currently, he’s first in his class in field goal percentage and blocks per game while second in offensive rebounds per game.

These are some impressive charts to top, especially given the circumstances. His offensive numbers are modest, but his defense can be infectious, or, at least, an unstoppable asset for the easily stoppable Knicks.

According to his on/off numbers, the Knicks have a 109 Defensive Rating with Robinson on the court and a 112.6 DRtg with him off. Robinson, with his raw athletic ability and defensive acumen, has been a force to be reckoned with this season. Maybe it’s not too much of a stretch to suggest that he could be a core building block for a competitive team. So, what steps would he need to take to legitimize this notion?

If there’s one thing Mitchell Robinson can do that would thrust him in the driver’s seat of the Knicks’ destiny, it’s working his ass off in the off-season. As simple as it sounds, there’s a ton of room for improvement for Robinson, and it begins with developing an offensive game.

At first glance (or highlight), you’d assume Robinson is only interested in dunking, but he ranks third among rookies in second-chance points per game and in the top 30 of all NBA players active for more than 50 games.

Yeah, there are plenty of lobs, but the put-backs are a special kind of demoralizing:

That kind of play could work wonders in destroying an opponent’s psyche: The 24 seconds spent playing good defense is all for naught because Robinson decided to go airborne. You hate (read: love) to see it.

Now, imagine instead of just a lob at the basket, Robinson learns to spin or put up a hook shot. Those added skills, even just the footwork, could add an entirely new dimension to his game.

Robinson is a lanky 20-year-old and turns 21 on April 1st. It’s no secret he needs weight training to be able to handle posting up against grown men in this league. However, if lobs are among his only offensive weapons, there’s really only one box that needs to be checked when game planning against him.

With his height and athleticism, Robinson could develop formidable post game skills that don’t necessarily conflict with the pace-and-space era. Learning to operate in the post could force defenses to help against him, leading to open perimeter players. If Robinson can get on the waiting list for Hakeem Olajuwon’s Big Man Camp, or have the Knicks fit the rumored five to six-figure bill, he should be in Houston for a month soaking up knowledge.

I know, I just gave a rundown of traditional big man skills that Robinson should lock into his muscle memory, and ball handling is essentially on the other end of the spectrum when it comes to traditional skills by position.

Nevertheless, Robinson is a special player, and the moments where he handles the ball should be sporadic yet lethal surges that the defense doesn’t recognize until it’s too late. It’s highly unorthodox, but Robinson should learn how to slash to the basket. He’s 7’1”, yet can be the quickest player on the backcourt in certain situations. His length combined with his athleticism does much of the job for him. Just watch his “Jose Cuervo Moment of the Week”:

The kid isn’t even of age yet, but the liquor companies can’t keep themselves away. Sounds like a centerpiece to me.

In all seriousness, Robinson was all over the place in that sequence: he swatted the shot, rebounded it, passed, hauled ass to the other side of the court, and slammed it home in a single moment. Praising his fast-break chops is one thing, but if Robinson could drive à la Giannis Antetokounmpo, it would be a step toward stardom.

Players that tall aren’t known or expected to have that kind of ball handling ability—thus adding to what makes the Greek Freak an athletic marvel. Cajoling Robinson into embracing his unique talents would change the conversation from him being a steal in the second round to a full-fledged phenom.

They all tried to stop Giannis Antetokounmpo…. It didn't go too well pic.twitter.com/ZSgM06xBZ5

No one is expecting Robinson to single-handedly bring back New York bully ball, but it would be an off-putting weapon that the Knicks could build upon as a part of a rebuilding offense, or as a break-in-case-of-emergency attempt at disorganizing a defense.

With Kristaps Porzingis gone and Kevin Knox and Frank Ntilikina underperforming, the Iron Giant is one of the few clearly positive things the Knicks have going for them at this point. It might seem like a silly notion, but Robinson is the closest thing the Knicks have to a stable centerpiece in their core.

While fostering Robinson’s growth, the Knicks shouldn’t look at what they have to lose in going all in with him—which is nothing as a lottery-dweller—but rather focus on the world they have to gain.

»READ: Can Mitchell Robinson be the Knicks’ (new) big man of the future?