How Much Blame Should Knicks General Manager Scott Perry Share? 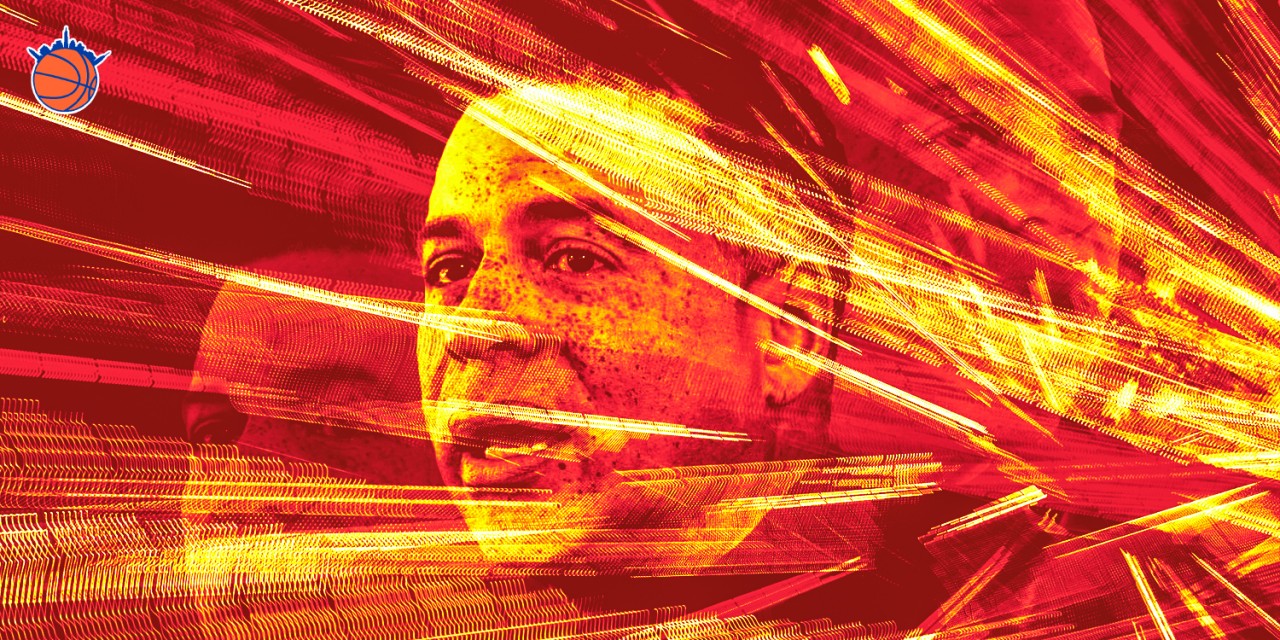 Scott Perry may not be inexcusable in the current Knicks mess, and if there is a big change at the top of the food chain, he could be out too.

One name that has managed to escape the lips of the disgruntled Knicks fans, in the midst of a seventh consecutive losing season, has been general manager Scott Perry. Most of the frustration has been focused on David Fizdale (fired), Steve Mills, and of course the omnipresent owner, James Dolan.

Perry has also been the sole recipient of any praise. As general manager, the Knicks have control of all their future first-round picks, have acquired a few extra picks, and stabilized their cap space to the point that they are not locked into any serious long-term money—along with having the flexibility to pull a swing-for-the-fences move. In comparison to his predecessors, Perry has done his job fairly well.

While Mills, and Fizdale before him, remain on the hot seat with Dolan, Perry’s future is less certain. The assumption has been that if Mills were to go, Perry would too—but Mills was able to survive the sacking of Phil Jackson, even receiving a promotion despite doing a poor job as GM.

So while it would be wise to assume Perry’s fate is tied to Mills’, we have to remember that anything is possible with the Knicks. As solid a job as Perry has done since taking over in 2017, he does not have all that compelling a case to stay.

For starters, the Knicks are 24-88 with him as general manager. Both he and Mills promised a proper rebuild. While they have stayed true to their word of not risking future assets in any trade, there has not been any improvement from last season’s team to this season.

Last year’s team was a well-built tank. This year’s team was built to compete, a talking point Mills emphasized on Media Day; yet the team is on pace for another sub-25-win season, has not shown improvement in any department, and will likely end with another appearance on the lottery dais.

Should Perry be allowed to oversee a year three, or should he be relieved of duty? On the surface that question is difficult to answer. If you put his moves under a microscope, however, a clear answer reveals itself.

One of his first tasks as general manager was finding Carmelo Anthony a new home. Phil Jackson had torpedoed Anthony’s trade value almost to the point of nonexistence, further complicating a deal that already had a no-trade clause to get around. Anthony wanted a fresh start, and the list of suitors he picked was slim.

Perry settled on a deal with the Thunder, trading Anthony for a pair of young players—Enes Kanter and Doug McDermott—who were not tied up in future money, and a second-round pick that would turn into Mitchell Robinson. Given the circumstances, the trade was a massive win for Perry, and a big source of the trust among the fanbase.

His work on the Kristaps Porzingis deal was not as successful. As much as we would like to move on from the Porzingis trade, it’s one of the seminal moments in franchise history, and the highest stakes move Perry’s been a part of in New York. The butterfly effect of the trade will be a topic of discussion for a long time, especially if the Mavericks thrive with Porzingis and Luka Doncic while the Knicks dwell in irrelevance.

The early returns of the Porzingis deal have been ugly. Dennis Smith Jr., the centerpiece of the deal, has been a disaster this season, and projects to be a rotational player at best. The unprotected 2021 first-round pick will in all likelihood fall outside the lottery, barring a serious injury to Doncic or Porzingis next season. The 2023 first-rounder is top-10 protected, so even if the Doncic-Porzingis marriage fails miserably, the Knicks cannot benefit.

Cap relief was the true centerpiece of this deal, allowing the Knicks to rid themselves of Tim Hardaway Jr. and Courtney Lee’s contracts—the former considered untradeable. Both signings were done by Mills when he served as GM.

The optics of the deal in the immediate aftermath made it bearable to part with the best homegrown talent the team has seen since Patrick Ewing. At the time the front office framed it as Porzingis wanting out, and signaled a star (Kevin Durant) was coming in July. A little less than a year later, the Porzingis narrative has begun to develop serious holes; Durant did come to New York, only he plays for the Brooklyn Nets.

This mess is on Mills’ lap more than Perry’s. It was Mills who dished out bad contracts. He was among those Porzingis blew off in the exit meeting that started the conflict in the first place. Where Perry comes in is the return.

According to ESPN’s Ramona Shelburne the Knicks started to gauge interest in Porzingis at the start of 2019. They offered a deal centered around KP in exchange for Anthony Davis, but Pelicans GM Dell Demps showed little interest. Perry and Mills took that to mean Porzingis lacked the type of value they thought, leading to the eventual trade with the Mavericks.

Perry must share the blame in that mismanagement. Porzingis was the greatest asset in his chest, and he sold it for 10 cents on the dollar.

Perry’s saving grace, if he were to stay, would be his draft history. Selecting R.J. Barrett third overall in 2019 was a no-brainer, and looks like it was the correct pick. His job-saving move was selecting Robinson with the 36th pick in his first draft with the team. Robinson is the best player on the roster, with legitimate All-Defense potential and more if developed properly. His first selection in that draft is less impressive.

Kevin Knox has flashed moments of potential—specifically shooting the basketball—but is still a blank canvas, while the three players taken immediately after him have found their footing.

Miles Bridges was among players the Knicks were said to be considering, before opting for Knox because he dominated Bridges during a one-on-one workout. Bridges now starts for a surprisingly competitive Hornets team. Mikal Bridges, another wing who was given serious consideration, is mostly a bench player like Knox, but has a clearer path to making an impact on his team.

The most egregious miss was passing on Knox’s Kentucky teammate, Shai Gilegous-Alexander. Heading into the 2018 draft, the Knicks made it clear they were going to take a wing. That is a declaration a team one piece away should make—not a team starting from scratch.

Gilgeous-Alexander was the best overall player on the board, and passing on him looks worse by the day. Gilgeous-Alexander is one of the best young players in the league. He would have freed the Knicks of their perpetual point-guard problems and is malleable enough to coexist with any player, negating any concerns that he and Frank Ntilikina would be redundant.

If you scouted Knox in any capacity, it was impossible to ignore the skill of SGA; he was the player who popped off the screen. The inability to notice that is troubling.

Aside from the Knox pick, Perry has drafted well for the most part. In addition to Barrett and Robinson, Ignas Brazdiekis appears to be a solid selection. Perry also signed Allonzo Trier immediately after the 2018 draft, added Kenny Wooten to the Summer League squad, and brought in Kadeem Allen.

If drafting has been Perry’s strength, his handling of free agency is why he should be fired. His first season was excusable: he had limited cap space and a homegrown star recovering from a major injury. With limited space he made minimal, modest signings, the largest being Mario Hezonja on a one-year deal. Perry was part of the front office that drafted Hezonja with the Magic. Noah Vonleh was the best signing, in addition to bringing back former two-way G Leaguer Luke Kornet.

This past summer Perry did not fare well. Once Porzingis was dealt, it was assumed the Knicks had a pair of stars lined up: Durant and a friend. When it became clear Durant wasn’t coming, Perry quickly pivoted to Julius Randle, who has been maddening to say the least.

Perry spent $74 million in contracts on a slew of role playing veterans. Marcus Morris has been the only home run; the rest varied from strikeouts to base hits. Elfrid Payton and Taj Gibson have been solid. Randle, Bobby Portis, and Wayne Ellington have been bad, and Reggie Bullock has not played yet.

The only good thing about the $74 million spending spree is that everyone except Randle can be gone at the end of the year. Each contract, except Morris, was a two-year deal with a team option or partial guarantee for the second year. Randle’s three-year deal also has a team option for a third season. The method is part of Perry and Mills’ flexibility plan—a fancy way of saying they are not crippling the cap on make-up signings.

Beyond the letdown of not landing Durant, the new veterans have only hindered the core of young players. If the Knicks are going to stink, stink with the kids. Right now the veterans are playing major minutes on a team going nowhere fast.

This is not an issue exclusive to Perry’s work in New York: in his brief time with the Kings, he was part of the front office that signed Vince Carter, George Hill, and Zach Randolph to play with a promising young core.

He cannot be blamed for failing to lure major free agents; that will remain an issue as long as Dolan and Mills loom. But the inability to build a cohesive roster through secondary signings is a red flag.

Expectations weren’t sky high for this season after the summer, but Perry was adamant that this team would be competitive. This has clearly not been the case. Even with the switch from Fizdale to Mike Miller, the same issues persist: none of these pieces fit, and they’re bad pieces.

There are larger problems at Madison Square Garden that need fixing before you get to Perry. In comparison to Mills (the main pillar in a near two-decade stretch of ineptitude) and Dolan (self explanatory), Perry is much lower on the priority list.

General managers have survived regime changes before, but if Dolan can land a Mills replacement like Masai Ujiri, Perry would likely have to take a walk.

If that time comes, he won’t have much leverage to stay. Perry shouldn’t be the fall guy; nor should he be exempt from the consequences of a failed season.