How RJ Barrett Emerged From Inconsistent Rookie to Breakout Sophomore 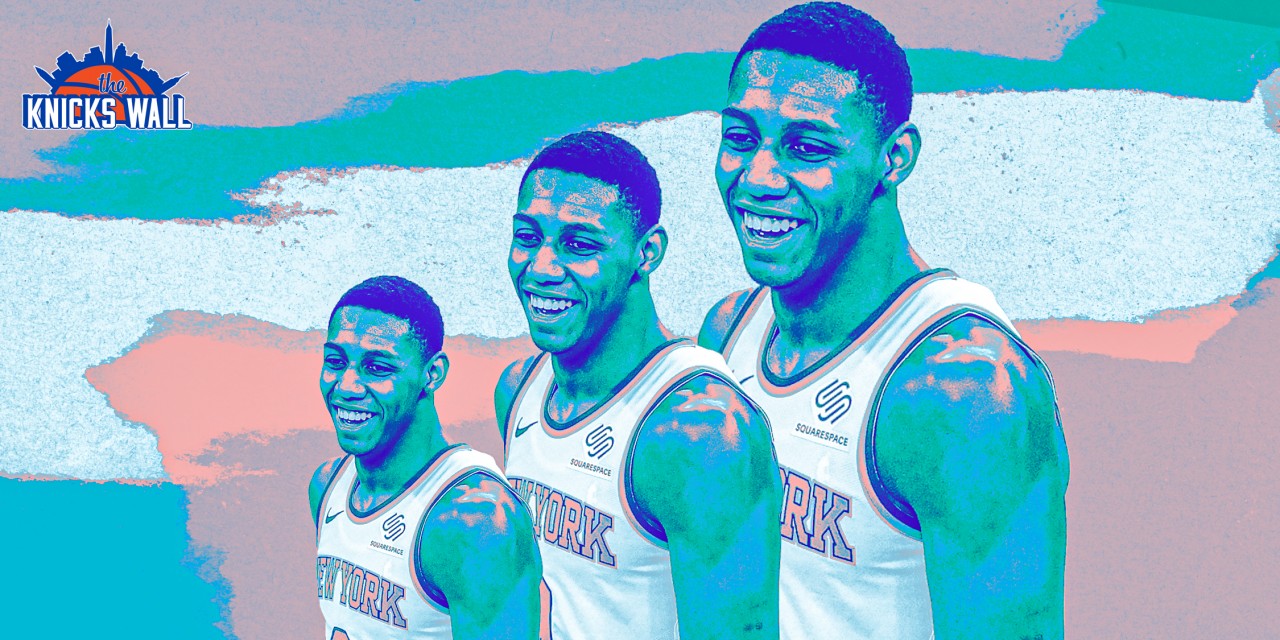 After a shaky start to his NBA career, RJ Barrett has embodied the new Knicks’ strong-willed and hard-work attitude in year two.

As the worst team in the 2018–19 NBA regular season, the New York Knicks had their hopes set high on lottery night in preparation for the 2019 NBA Draft. With a 14% chance of securing the no. 1 pick, the possibility of Zion Williamson coming to New York seemed very real.

Unfortunately, the odds fell out of their favor as they ended up with the third pick. Once the Memphis Grizzlies grew enamored with Murray State star Ja Morant, the Knicks became laser-focused on R.J. Barrett. The 19-year-old Canadian guard had just averaged 22.6 points, 7.6 rebounds, and 4.3 assists per game at Duke University as Williamson’s teammate.

This was still a big win for the franchise. Barrett had all the makings of a player to build your team around. On a roster deprived of star players, Barrett had an opportunity to get ample playing time with the ball in his hands and live up to that star role on a team with no defined expectations.

“This is the place I wanted to be.” –@RjBarrett6

Unfortunately, he didn’t immediately turn into the star Knicks fans had hoped for last season. Barrett averaged 14.3 points and 5.0 rebounds while playing 30.4 minutes per game. While those numbers seem respectable, they come on high volume and low efficiency. Barrett’s shooting percentage was just 40.2% from the field, and 32% from three-point range. In fact, on any attempt away from the rim, he only shot 29.4%.

Barrett found trouble trying to drive the lane, something he was able to do with ease in his one year at Duke. He would often find his way into heavy traffic, and then hoist up a prayer hoping to get a foul call. Take the below clip against Indiana, for example, where Barrett takes the ball down court full steam and barrels into a stonewalled Domantas Sabonis.

Even in the event Barrett would get a shooting foul called, he still had trouble from the free throw line. He only made 61.4% of his free throws in his rookie season.

The hits kept coming for Barrett when he wasn’t even named to an All-Rookie team at the end of the season, despite his bulky numbers in extended playing time. He was vocal about his displeasure with this and made a point to prove wrong those who doubted him after that year.

Whatever motivation it gave Barrett, it certainly helped to make him into the player he was expected to be. Through 69 games in his sophomore season, Barrett has improved tremendously across the board. His plus/minus on the court has gone all the way from a -5.8 last season to a +1.9 this campaign.

Most noteworthy, he’s gone from averaging 14.3 to 17.5 points per game and shooting incredibly better from all around the court. His Offensive Rating jumped from 105.4 last year to 110.1 this season. He’s shooting 3.8% better from the field, and 7.3% better from three-point range. His three-point percentage is 39.3% currently, putting him among the top-70 players in the league.

That shot has become fundamental for Barrett, as he averages over four three-point attempts per game. He just capped off his most electric shooting month in April, knocking down 48.2% of his three-pointers on 85 attempts. His previous high attempted in a month was 57 back in January. On Tuesday in Los Angeles, undoubtedly Barrett knocking down his regular clip of threes (instead of 0-for-8 from deep) would have put the overtime game to bed.

Outside of the three-pointer, Barrett has looked more comfortable driving to the basket. After Tuesday, 45.6% of his shots inside the arc have been taken at the rim, of which he has made 61.2%. As often as he gets to the rim, Barrett still isn’t getting many foul calls. He’s averaging fewer free throws per game than he was in his rookie season, and only 16.6% of his points have come from the free-throw line. He has improved his free-throw percentage by 12.9%, though, so he is hitting them when it counts.

In the below possession against the Rockets on May 2nd, Barrett gets the ball at the three-point arc and exploits a mismatch with Kelly Olynyk. Barrett uses his left hand to drive to the rim and manages to draw a foul on the made basket.

While Barrett’s offensive improvements have been stark, his defensive impact this season is nothing to overlook. After posting a Defensive Rating of 114.5 last season, he’s brought that number all the way down to 107.5 this year. With Derrick Rose swapped for Elfrid Payton, the starting unit has posted a Defensive Rating of 99.3, leading the fourth-best defense in the NBA.

Barrett’s rebounding numbers have improved mildly, averaging 0.8 more rebounds than a year ago at 5.8 per game. After the Lakers game, he is on the floor, though, the Knicks out-rebound their opponents by 2.3% and force turnovers at a rate of +0.6%. Barrett also fouls opponents at an average of 3.8 times per 100 possessions, tied for the fourth lower number on the team.

Even though Barrett forces less than a steal a game, he is making a name for himself by playing quality on-ball defense and forcing opponents into poor decisions.

Guarding former Knick Austin Rivers in this clip, Barrett sticks to him closely as he gauges his options from the three-point line. When Rivers decides to make a move for the basket, Barrett doesn’t miss a step and follows him right to the rim. By extending his arm as Rivers goes for an awkward lay-up, Barrett tips the attempt and grabs the easy rebound.

Oftentimes, Barrett is able to turn those situations into instant offense by playing great transition basketball. Over 13% of Barrett’s points this season have come in transition, on the fast break, like this one against the Clippers on Sunday. He finds himself in the right spot after a bad pass by Patrick Beverley, and instantly rumbles back on offense and hits the Euro-step floater with Beverley as his only defender.

With these improvements on defense to go along with his electric shooting, Barrett has proven himself to be a key to this Knicks team. And while a year ago he was believed to be the star player to right the ship for the team, that perception has shifted substantially. This isn’t a bad thing. His narrative has shifted in all the right ways.

Just like at Duke, Barrett has played best as the second option. No one expected Julius Randle to be an All-Star in the back-end of the MVP conversation. With him taking on the brunt of teams’ defenses, Barrett has thrived in all the ways fans could have hoped for in a complementary player. He’s the second-leading scorer on the team, a stalwart defender, and has proven himself to be a more than reliable option in close games.

He’s looking more like the player fans expected and proving those wrong who left him off the All-Rookie teams last summer. The sky is the limit for the 20-year-old Canadian. His year-to-year improvement has been stark, and his game will only continue to evolve as he inherits a larger star role on a playoff-ready Knicks team. In a few years, he just might be able to put an All-NBA plaque where that All-Rookie one was supposed to go.

»READ: Expanding the floor is the next step in RJ Barrett’s ascension