How Should the Knicks Be Recognized in End-of-Season Awards? 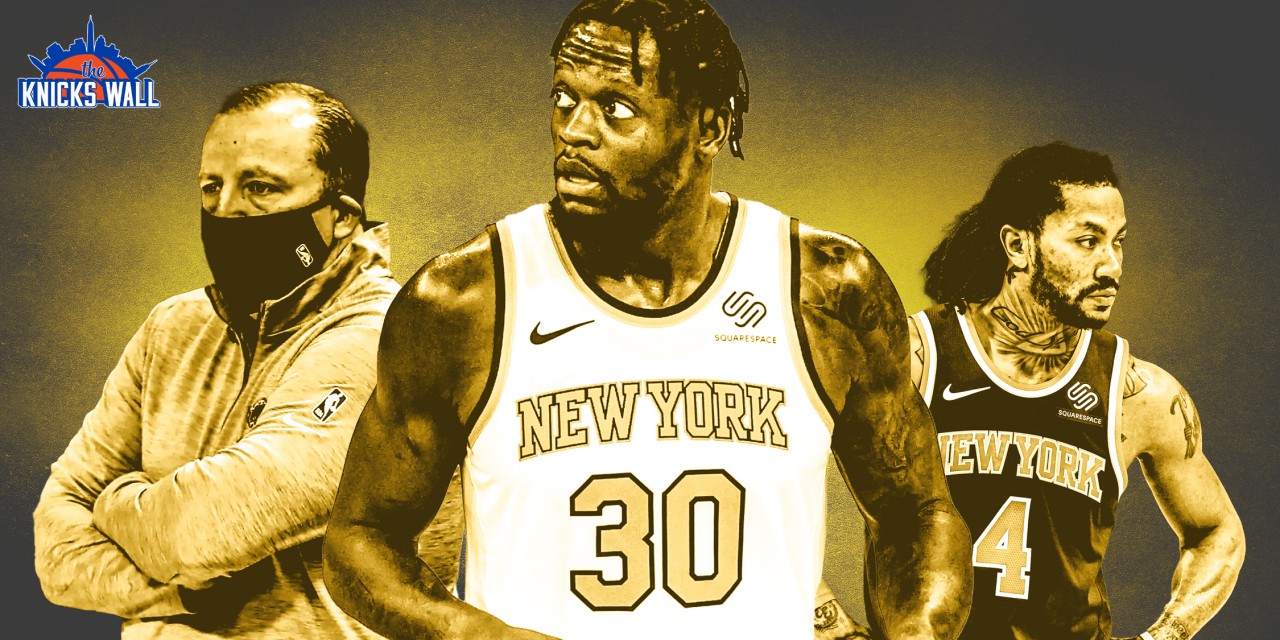 After shocking pundits and fans with a 41-win season, the Knicks have several viable contenders for the NBA’s end-of-season awards.


With a win over the Boston Celtics on Sunday, the New York Knicks clinched the no. 4 seed in the Eastern Conference on the final day of the 2020–21 NBA regular season, finishing with a record of 41-31. That is an extraordinary accomplishment. In the first full season under Tom Thibodeau and Leon Rose, the Knicks flipped a group projected to win 22 games into a pseudo-contender and the franchise from punchline into a respected enterprise.

Coach Thibs on what the Knicks (finally) making the playoffs means to young fans, and how the franchise is preparing for their first round matchup already 👀 pic.twitter.com/iVll0gkO7X

New York will host a playoff series for the first time since 2013, and Knicks fans will be forever ecstatic about the collective performance of this Knicks group. Having said that, let’s celebrate the individual campaigns of a few of these Knicks and how that should be reflected in awards voting.

Immanuel Quickley’s stellar rookie year has been thrilling to witness. Quickley, predictably, has proven to be a fearless combo guard who can hit free throws, rain triples, and eagerly pester opposing guards. In one of the best rookie campaigns in recent Knicks history, Quickley averaged 21.2 points per 36 minutes while shooting 38.9% from deep.

While the top candidates for Rookie of the Year seem to be Charlotte’s LaMelo Ball, Sacramento’s Tyrese Haliburton, and Minnesota’s Anthony Edwards, Quickley should still be slotted on one of the All-Rookie teams. For this award, positions aren’t factored onto the ballot, so IQ could certainly wind up on the First Team: an incredible look for the 25th overall pick.

While he doesn’t project to be an All-Star, Quickley looks like a Marcus Smart–esque building block for Thibodeau.

Lottery-pick Obi Toppin came on too late to garner consideration, but at least he came on at the end of the season. For May (nine games), Toppin shot 55.2% from the floor, knocked down 41.7% of his outside shots, and wasn’t a complete negative on defense. With a full offseason, Toppin could be an interesting second-year player for New York off the bench.

Sixth Man of the Year

Derrick Rose is making a late push for inclusion on this ballot.

In 35 games with the Knicks, Rose averaged 14.9 points in 26.8 minutes with his career’s most efficient shooting splits (.487/.411/.883). Like seemingly everybody on the roster, he’s playing better defense than ever.

The Utah Jazz finished first in the Western Conference, largely due to the help of their top bench players—Joe Ingles and Jordan Clarkson. Meanwhile, Mavericks reserve guard (and future Knicks target) Jalen Brunson is also making a strong case for the award with 12.6 points and 3.5 assists per night. However, I’m not sure another bench player has had more of a direct impact on a team than Rose, especially considering his crunch-time play.

Rose will be dinged due to a lack of games, but he should receive some third-place votes.

Nerlens Noel deserves a few votes. He’s been outstanding as a rim protector, including in Sunday’s season finale versus the Celtics.

Genuinely can’t recall his effort level wavering at any point. He’s been so key in almost every contest to this point https://t.co/R5md4EcszY

Noel has contested the most shots on the Knicks, despite spending a third of the season as a backup. He’s second in the NBA in blocks per 36 minutes.

Noel has more than adequately filled the void left by Mitchell Robinson, which has rendered his performance that much more valuable to one of the best defenses in basketball.

Coach of the Year

Tom Thibodeau is either going to finish first or second in Coach of the Year voting.

Historically, the template of “first-year coach plus surprising improvement” is an award-winning formula. It doesn’t hurt that Thibodeau is also a long-respected veteran helming the most high-profile success story of the NBA season.

Plus, Thibodeau’s impact is easy to pinpoint. The Knicks have visibly adopted his DNA and ruggedness. They approach each possession like a Game 7 and have fully invested in what their coach is selling.

Monty Williams may be Thibodeau’s stiffest competition, but some voters will attribute the Suns’ success to Chris Paul—reflected in an MVP vote. Quin Snyder and Erik Spoelstra will get support, but their excellence with the Jazz and Heat, respectively, is nothing new.

In 2020–21, specifically, no head coach had had a greater influence on his team than Thibodeau. He’s +200 to win the award, as of last week. You had my curiosity. Now you have my attention.

Thibs will personally see to it that this team wins its 7th straight pic.twitter.com/dqaPoWulGP

Executive of the Year

Why not Leon Rose?

The former CAA’s agent strategy of laying low—both in terms of transactions and media relations—won’t help him win the award. It’s also precisely why he merits consideration.

Approximately 98% of folks getting the keys to the Dolan-mobile would immediately hit the gas, and within months they’d be missing turns and losing direction.

Instead, Rose resisted the urge to open his checkbook, biding his time while giving the young roster a chance to develop under Thibs. His second draft pick, the Rose trade, and the Noel and Alec Burks signings were hits. Taj Gibson is a Thibs guy, but he’s been great, too. The Knicks still have gobs of cap space and plenty of draft capital. Whatever batting average that translates to, it has to be better than most.

He hit a home run with the coaching staff, and the organization has been humming uncharacteristically smoothly. Ultimately, Rose’s job was to turn the Knicks into a destination franchise. This upcoming free agency period will determine if he’s already pulled it off if he hasn’t already.

The Knicks are guaranteed hardware here: Julius Randle is a lock.

The precise criteria for MIP are opaque, but Randle epitomizes what, I believe, is the award’s intention: a not-super-young player who unexpectedly levels up.

Randle hasn’t just added one or two skills: he’s honed every part of his game.

The uptick in his assists (from 3.1 to 6.0) is glaring and a convenient figure for voters to recognize the matured decision-making that has defined his improvement—ditto for his 41.1% clip from downtown. On defense, he’s more alert, competitive, and destructive.

Randle has earned a long-term deal in New York. As dramatic as his improvement on the court has been over two seasons in New York—from infuriating bowling ball to heady playmaker—his turnaround from pariah to cult hero is even more astonishing.

Julius Randle’s leap into stardom is one for the ages ⭐️ @J30_RANDLE pic.twitter.com/D0va6RCKIl

R.J. Barrett has a chance to get some votes in this category, as well. (You can read TKW‘s Patrick Kiernan for a detailed analysis of his evolution.)

Randle and Barrett receive bonus props for grinding out heavy and high-volume two-way minutes under Thibodeau and consistently having enough in the tank to close on my theoretical ballot.

The emergence of Barrett and Randle is the most important development of the Knicks 2020–21 season. Building the foundation for a contender requires multiple All-Star-caliber players. The Knicks started the season with zero. They’re finishing it with two.

Unlike the other awards (beyond possibly Executive of the Year), voters rank five names for MVP.

Randle won’t garner as much support as front-runner Nikola Jokic, Joel Embiid, Giannis Antetokounmpo, Stephen Curry, nor Luka Doncic. But he’ll be represented on some ballots in the final tally.

His play never slumped, and he led the league in minutes while playing (hard) in 71 games should impress voters. He had no shortage of memorable moments and nights when he lit up NBA Twitter. He won Eastern Conference Player of the Month in April and finished with double-double averages of 24.2 points and 10.2 rebounds.

Injuries will knick the voting count for James, Williamson, and Tatum. Randle is probably going to end up on the Second Team, and if not, he’ll be named to the Third Team. Miraculous.

Now, it’s playoff time. After all that: it’s time to step up.