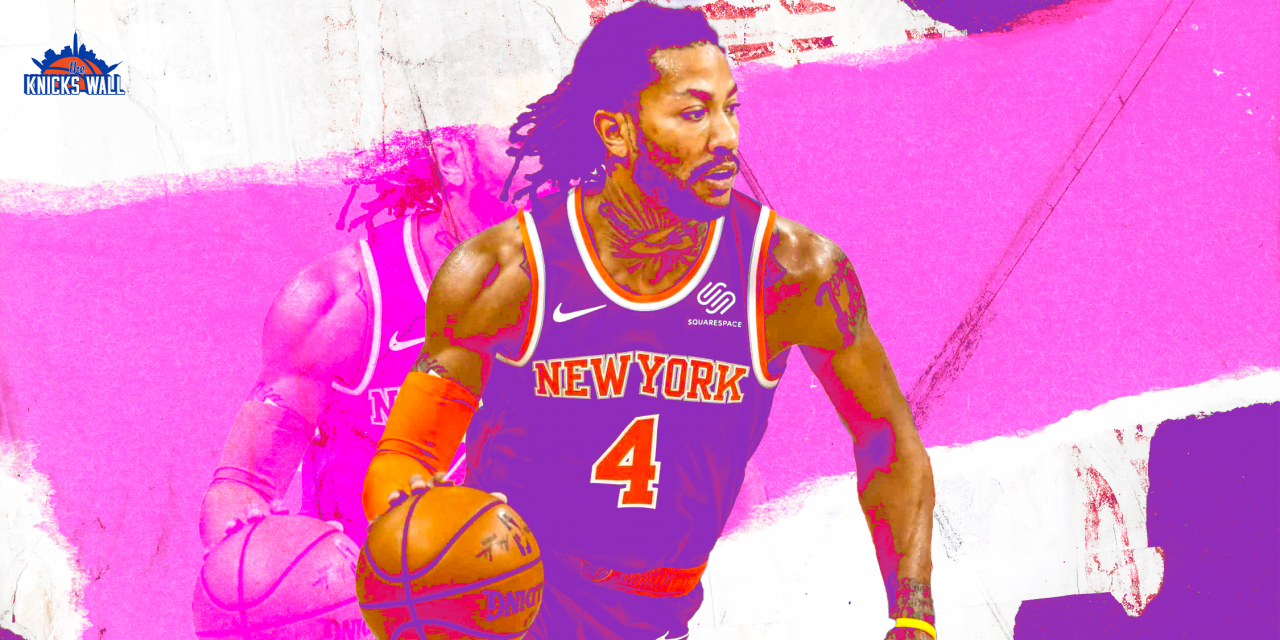 Derrick Rose barely played last season, and with murmurs of more playing time for Immanuel Quickley, the Knicks could rid themselves of the oft-injured former All-Star point guard.

The 2021–22 season was a disappointing one for the New York Knicks, one that could’ve pushed back the long-term trajectory of the team. Heading into the offseason, the Knicks are going to have to look at every piece in order to improve. From Julius Randle’s long-term status to whether or not they have the pieces to make a trade, New York’s roster needs to be re-evaluated.

The most intriguing evaluation will be Derrick Rose. The former MVP will be entering his age-34 season on the second year of a three-year contract. Last year, Rose only played just 26 games last season and was a crucial loss in New York’s down season. Entering the 2022–23 season, the Knicks will have to make a decision whether to keep Rose or move on.

Keeping Derrick Rose seems like an easy decision. Though his stats were modest—12.0 points, 3.0 rebounds, 4.0 assists, and 54.1 TS%—Rose was a key piece off the bench for the Knicks, providing New York with a smart point-guard option. The once eclectic pick-and-roll dynamo is now replaced with a guard who probes defenses more than slashes. The elite athleticism has now been replaced by 40% shooting from the outside. He also had a fairly decent relationship with Obi Toppin as his pick-and-roll partner, which helped him early in his career.

For New York, Rose is a perfect veteran backup point guard who knows how to be monitored by Tom Thibodeau—that second part is important. Last season, Thibodeau gave him four starts, but maintained his minutes between 20 and 28 a night; rarely giving him more than that. Whether it be Elfrid Payton in 2020–21 or a struggling Kemba Walker in 2021–22, Thibodeau leaned on the alternative and largely left Rose in his reserve role, where he was allowed to thrive.

If he were to return, Rose would assume that backup point-guard role and offer the Knicks something they missed in the second half of last season—stability. His ability to thrive in the pick-and-roll and shoot is a welcomed sight to any rotation.

On the other hand, the Knicks moving Derrick Rose would be a wise move for New York. We’ve mentioned just 26 games last season, Rose has battled injuries for most of his career, making his availability more of a question mark than anything. As talented as Rose is, relying on him and his production at this stage is a tough ask. In a perfect world, Rose is healthy for about 60 games, but the former Memphis product has failed to register that total since the 2016–17 season.

Before, Rose was a second unit placeholder to play alongside Immanuel Quickley in his rookie season, but the game has changed. Quickley has impressed to the point where he looks to be, at worst, the team’s backup point guard next season, and with guys like Evan Fournier and Alec Burks, players who can handle and create in the second unit, I’m not sure that role is needed. It also must be asked; can the Knicks get a more consistent backup?

Rose has weird trade value. With a sizable contract at $14.5 million, Rose offers another ball-handler and shooter in the backcourt, while also being a solid defender over the last two seasons. The problem? Who is in need of a backup point guard? Often, that’s an upgrade for a contender, but teams like the Los Angeles Clippers have other ball-handlers on the roster, while others, like the Milwaukee Bucks, don’t have the asset to offer.

What about sending Rose, Burks, Noel, and Fournier to Los Angeles for Russell Westbrook, Talen Horton-Tucker, and their unprotected 2027 and 2029 first-round picks and just release Westbrook? It won’t happen, as the Knicks probably value these players more than that, but I’m interested from the asset collection standpoint.

One intriguing option for New York is to move Rose and most of the veterans and bring in a backup point guard closer to the young player’s age. Would moving Rose in a trade and signing Tyus Jones from Memphis make sense for the Knicks? Jones is younger, arguably better insurance if Quickley struggles, and could play alongside Quickley in smaller lineups. Jones is also a better trade chip if everything works out.

The New York Knicks have several questions to answer heading into the 2022–23 season and Derrick Rose is oddly one of them. There’s an argument to keep him, as a veteran point guard that Thibodeau both likes and trusts within his minutes could help this team. However, if this team leans towards using the youth, using Rose as a trade chip and giving the job to someone else could be a direction the Knicks should entertain.

Either way, the second Derrick Rose run makes up for the first and when healthy, he’ll continue to be a solid player who can contribute, whether it be for the Knicks or someone else.

»READ: How Knicks draft stash Rokas Jokubaitis factors into the rotation next season