How to Maximize RJ Barrett in Year One 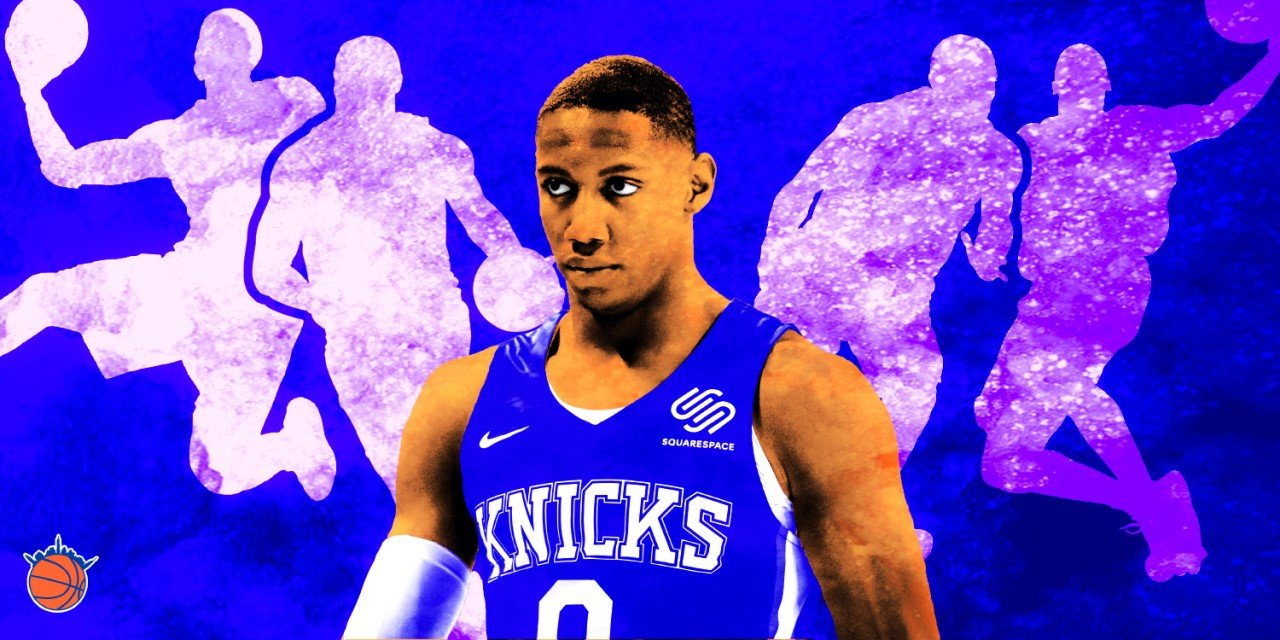 Exploring the type of players and lineups Knicks rookie RJ Barrett should play with in order to extract the most value out of the swingman.

R.J. Barrett cleared his first hurdle. Similar to GoodFellas, where you are not an official member of the crew until you get pinched, you are not officially a Knick until you’ve been loved, questioned, hated, and loved again. Barrett experienced this full cycle in the span of eight days.

After two poor performances to start his Knick career, Barrett was considered a bigger bust than Justice League. The honeymoon phase ended swiftly, Barrett’s lack of explosiveness and shooting touch became trending topics, and the world was literally collapsing.

Then something miraculous happened: a 19-year-old found his footing in his third professional basketball game and started to cook. Barrett ended his Vegas trip on a high note, posting three straight double-doubles, capped off with a near triple-double performance in a win versus the Wizards.

As impressive as his bounce back from a horrific first two games was, Barrett’s demeanor is what stuck out. He shut out the outside noise, which got pretty loud after his eight-point stinker against the Suns, and allowed his game to be his rebuttal.

Beyond shutting up some doubters, Barrett gave skeptics a better feel for what type of player to expect this season.

The tendency is to fantasize about what rookies could become, while becoming frustrated with what they currently are. It’s a bad habit.

Coming out of Duke, R.J. had a plethora of player comps, varying from foolish (Andrew Wiggins), to hopeful (James Harden), to kind of in the ballpark (DeMar DeRozan). With a five-game sample size, Barrett flashed an encouraging playing style, akin to one of his more hopeful comparisons, two-time scoring champion and Rockets star Harden.

Before you close this tab, hear me out. The Harden comparisons have been out there. Check out this excerpt from a Harden scouting report coming out of Arizona State:

“The biggest issue for most scouts will be his athleticism, or relative lack thereof. … [A] lot of critics worry that Harden will not be able to finish at the rim in the NBA. What Harden lacks in athleticism, however, he makes up for with a great understanding of the game and what he can do. I like to say he has ‘old-man’s game.’

“This is even more evident when you consider that Harden was really the only player on his ASU team with the ability to create his own shot, and he was still able to average 20 despite defenses gearing toward him (he was also able to penetrate … though teams knew he is much better going left, to his strong hand).”

Sound familiar? It would be foolish to say Barrett will eventually become what Harden is, yet the playing style has some similarities.

Both possess a strong understanding of what’s going on at all times with a propensity to make the right pass. Once Barrett found his bearings, the ball hogging stopped and the good reads began.

Where Barrett and Harden differ is how they make up for that lack of burst. Harden has the ball on a rope, forcing defenders to fall back. R.J. does not have this luxury, which makes getting to the rim a tougher task. Defenders do not fear getting rope-a-doped by the 6-7 swingman, so instead he has to force the issue, using his strong frame and subtle strides to slither past defenders.

RJ TO THE RACK pic.twitter.com/NS9fii3Rsj

His shot, as noted earlier, was off for most of the Summer League, but that is nothing to get up in arms about. There were enough encouraging sequences where you can see Barrett developing a reliable jumper. As at Duke, he looks most comfortable shooting off a feed versus off the dribble.

R.J. Barrett has a strong game last night, getting to the line 10 times to compensate for a slightly inefficient night, and was all over the glass.

Defensively, he was better than expected. He will remind no one of Xavier McDaniels, nor will he be a human turnstile. Barrett will always give you the effort, he just might not be suited to deal with speedy guard. Against the Suns, Jared Harper sped past him like he had EZ-Pass. Moving forward, Barrett could be the de facto point guard on offense, but rarely if ever should he be guarding the opposing team’s point.

The key question regarding Barrett heading into training camp is: how can the Knicks keep the positive momentum from Vegas flowing?

David Fizdale took a “throw him to the wolves” approach to Kevin Knox, which did work to an extent, but also led to one of the worst statistical rookie seasons of all time. A key contributor to Knox’s subpar rookie campaign, playing time aside, was the talent surrounding him.

This season’s roster includes actual NBA players, placing Barrett in a much favorable position from the jump. It also gives Fizdale flexibility to nurture R.J. in a way that was not possible with last season’s tank-tastic roster.

If this summer has taught observers anything, it’s that landing big free agents might not be in the cards under current ownership. The onus is on the coaching staff to maximize the talent accumulated through the draft. Barrett has star potential within him; it is vital that he is put in positions to not just succeed, and awaken that untapped potential.

Here are some lineups that can bring out the best in Barrett for year one:

If there is a checklist of things Barrett needs around him it would look like this, in no particular order:

This lineup checks all of those boxes.

For most of his basketball life, R.J. has been his team’s best scoring threat. That will not be the case this season. He will be able to score from day one, true, just not at the rate he is accustomed to, nor the with efficiency desired from a top scorer. Because of this, it will be necessary to group him with guys who can score the ball in their own right.

The best case for Barrett on the Knicks before the summer was using him as a tertiary scorer alongside Kevin Durant and Kyrie Irving. Julius Randle will instead assume the role of top dog, with Dennis Smith Jr. hopefully ready to take on that secondary scoring role, placing Barrett third on the totem pole.

The success of this lineup will hinge on how far along Smith’s jumper is, as The Knicks Wall’s Tyler Marko covered last week. There has been encouraging footage, but open gym season is one thing—the regular season is another. Operating under an optimistic outcome, this lineup will allow R.J. to ease into his scoring, while being able to have the ball in his hands and be the de facto point.

Bullock and Robinson are nice complements, as neither needs the ball in their hands that much. Bullock would be mainly used for cuts and catch-and-shoots beyond the arc (37.7 3P%). Mitchell will be open for lobs, something him and R.J. started to vibe on as they logged more court time.

Smith and Robinson will have to carry the weight defensively. The center’s rim protecting is well known, but Smith is underrated on that end. If he can consistently bring this energy on the defensive end, Barrett has help up top and down low.

This could easily be the team’s starting lineup by midseason, and could be a good one if the little things bounce right.

Scouts and draft experts universally agreed that Barrett would need to be surrounded by strong shooting early on. This lineup provides just that, with Dotson (36.8 3P%), Marcus Morris (37.5 3P%), and hopefully Ntilikina, who has the foundation to be a good 3-and-D player.

Barrett would hold the ball a lot in this lineup, which is when he seems most at ease. Morris is capable of generating his own shot too if needed, as are Dot and Gibson, although he does not need to touch the ball much if at all.

Gibson’s best use in this lineup would be on the defensive end. His defensive prowess would hopefully rub off on the rook, too. One thing Gibson can appreciate is Barrett’s tenacity—and hopefully he can mold that into something the way Tom Thibodeau channeled Gibson’s.

What makes this lineup so good is that it would be a bench unit, which ideally is where Barrett would begin his career. As mentioned earlier, there is some Harden in Barrett’s game. Harden began his career running the second unit instead of playing third fiddle to Durant and Russell Westbrook.

The way the summer played out, it’s unlikely the Knicks do not start their highest draft pick since Patrick Ewing. Barrett will likely start, but maybe, just maybe, he’s featured in this lineup for stretches.

There had to be a lineup with Brazdeikis. Beyond his unrivaled swagger, Iggy is the guy Barrett seemed most comfortable with off the bat. That comfort level comes in handy when shots aren’t falling.

The Knicks turned to this after R.J.’s less-than-stellar debut. Iggy was inserted into the starting lineup and started off the game with this:

Brazdeikis serves as a safety valve for R.J., as well as someone who can create for himself and knows when to cut to the rack. In this lineup R.J. could handle the ball often, with Iggy and Smith playing off as cutters or spotting up. Bobby Portis (39.3 3P%) would be the floor spacer—and you already know what Mitch will be doing.