How Tom Thibodeau Can Avoid the One-Hit-Wonder Distinction

Tom Thibodeau’s debut season as the Knicks’ chief orchestrator went quite well. But the work isn’t finished, and he could improve.

Awards in the NBA are pretty cut and dry these days, especially the reasons for which they are handed out. MVP goes to that season’s best player (or most valuable, though the gray area is something we’re not allowed to talk about). Defensive Player of the Year? Read it aloud and tell me who you think gets that one. Same for Rookie of the Year, for Most Improved Player, Sixth Man, and all the rest. If it looks like a duck, swims like a duck, and quacks like a duck, I have a feeling it’s probably a duck.

In most cases, that is. The Coach of the Year award is no duck. Not even a goose, if we’re being honest. There are layers to this one. It’s… an onion. Peel back one qualification, and you’re bound to find a host of others. You don’t just win COY for being the best. Well, you can, but there’s more to it (the layers!). You win COY because you helped a team emerge from the cellar and return to prominence; occasionally, you win because you’re a good story. Really, you win because you created or caused the most positive change. This, arguably, is the award that should carry the “most valuable” label.

Tom Thibodeau won COY for his efforts last season because he influenced the New York Knicks in a positive fashion. That’s the overarching reason. There are many layers to his victory—the fact that Julius Randle turned Super Saiyan for 70 games, that the team shocked everyone by catapulting up to the four-seed in the East, to name a few. But it’s successfully gutting a system that had been failing this and every modern iteration of the Knicks since the Mike Woodson era that wins you the trophy. (Maybe not the Larry O’Brien one. Not yet.) His campaign last season captures the award’s ethos like no other winner in recent memory. Monty Williams would have made a fine victor as well, but it’s Thibodeau who resurrected the Knicks and helped recall a feeling of excitement, like when The Garden was Eden.

But the 2021 COY is just that: the 2021 COY. It remains in 2021, just like the season’s embarrassing and abrupt ending, with exceptions for when Mike Breen brings it up how loud that crowd was on every single home broadcast and Stephen A. Smith yells “DESE DO NOT FEEL LIKE DA NEW YAWK KNICKS OF YESTUH YEUH, NOR LAST YEUH, OKAY” on TV every third Tuesday morning. The thing to remember about awards, overall, is that they’re given out on a yearly basis.

So, while his 2021 campaign might buy him an extra two or so years of cushion should things go awry at some point, there’s still room for improvement. That’s how the world works; Nikola Jokic better not turn in anything less than the fifth-greatest individual season in NBA history next year, or else we’ll never hear the end of it from Nick Wright. FS1’s answer to Mike Greenberg won’t be as passionate (nor loud) should Thibs crater off, but other knives will certainly come out. How can he avoid them, you ask? By considering the following.

Funny enough, if you just glanced at the numbers and formed your opinion on them alone, you’d think the Knicks were moving plenty. R.J. Barrett (14,105.3 feet) and Julius Randle (13,982.9) both ranked inside the league’s top 10 for total distance traveled. The next Knick on the list, though? Reggie Bullock, with 11,699.9 feet in total. And after him, it’s Mitchell Robinson (10,494 feet), who literally played less than half of last season, for what it’s worth.

It’s worth a lot, actually. It gives us a window into one of the team’s biggest issues, something they seriously need to nip in the bud moving forward: they don’t move. Aside from Barrett and Randle, the team operated in a stationary position. That Robinson can miss half the season and move close to 1,000 more feet than, say, Elfrid Payton (while only playing four more minutes per game, mind you) feels disastrous. Holy calamity, indeed.

Now, Second Spectrum doesn’t split their measurements by whether a player is on the ball or off it. That’s where touches come into play. Randle was fourth in the league with 5,936 in total. The next Knick? Barrett, obviously, with 3,414. Sure, Randle was the team’s primary scorer and creator. But for him to be positioned, at times, as the only scorer and creator? That won’t work.

To keep it simple, the off-ball Knicks need to fly around more. That’s how my high school coach always put it; I’m sure Spadoni won’t mind if Thibodeau steals his lingo. He always pushed us to keep moving if the ball wasn’t in our hands, if we weren’t the man concerned with directing traffic. This isn’t necessarily something you see a lot of in the NBA—these guys are pros, and have been grandfathered into perpetual laziness—but for the Knicks to succeed long-term, this will be crucial to implement.

The absence of a true point guard last season (a void now filled by Kemba Walker) and/or a second consistent shot-creator (Walker; Evan Fournier, even more so) didn’t help. So, now that they’re on board, this change should be natural. If it isn’t, a plug of some kind is going to get pulled.

No, no, no. This is not an argument for load management (something that might be smart to broach with a separate player or two). Instead, it’s a call for Julius Randle to, perhaps, be less involved in the offense. Or at least less intimately involved. Obviously, we’re not looking to turn last year’s best surprise—its Most Improved Player winner—into a decoy, but maybe, just maybe, it’s not the worst idea?

Hear me out on this: We all know it’s not a sustainable game plan, handing Randle the keys to the Ferrari and letting him rip and roar through traffic undirected. The problems with that approach were on full display against the Atlanta Hawks in the first round of the playoffs last season, when Capela and co. immediately aimed to neutralize any impact the Knicks’ principal motor hoped to have throughout the series. This point of emphasis is actually the perfect dovetail for my previous one: if the off-ball Knicks had flown around more against the Hawks, perhaps shots would have been more attainable and, in succession, would have fallen.

Don’t fans want that next year? Touches have to be distributed a bit more equally. Heck, even if Randle remains the primary shot-creator—which hinges on whether last season was a fluke or not, a point on which there are pleeeeeenty of differing opinions—wouldn’t it be better for everyone involved if he was doing more shooting, less creating? The biggest bang for the team’s buck would come if the newly extended Randle continues to draw defenses to the point of them collapsing, thus allowing him to either draw a foul or dish to an open teammate (because they’ve been flying around so much!).

He has those now. Well, he always had teammates, now he just has more serviceable, offensively gifted ones. What Walker and Fournier can do as shooters gives even non-Knicks fans goosebumps (though, having watched them on the Celtics last season, my expectations are admittedly somewhat tempered), and what they can provide Randle with—freedom to relax as a creator, or freedom to fly around on his own—is cause for a whole lotta this. 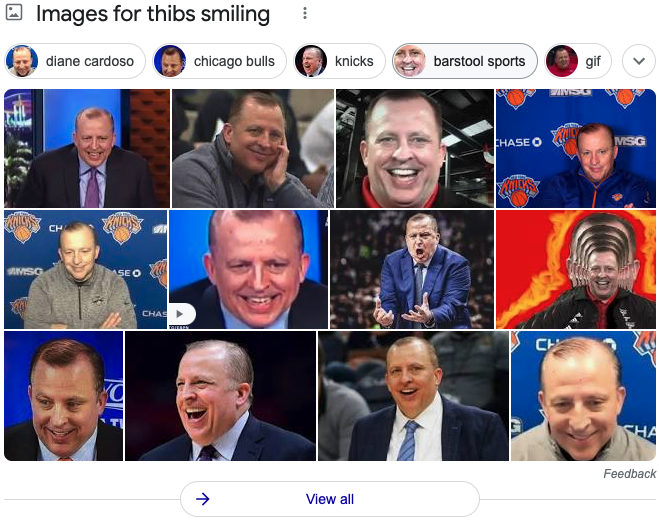 Get better on defense. No, really.

For a team with the defensive prowess of a Greek God—in normal-speak, the league’s fourth-best Defensive Rating, a clean 107.8—the Knicks don’t force nearly enough turnovers. They were 23rd in the NBA last season in turnovers forced (12.8). New York was as good at forcing empty possessions as it was bad at taking them away altogether.

Their off-ball defense (a calling card last season, as their rotations often sent teams into a spiral, then a whirlwind, then a tornado) can still be more active. Hands in passing lanes; ball-denial; collapsing on runaway creators at opportune times. All of these things would likely aid the Knicks’ overall defensive numbers, and in return, boost their offensive output. They were 22nd in Offensive Rating last season (110.2) and dead-last in pace. They were also dead-last in total possessions, the only team to not eclipse 7,000 over the course of last season. Thibs harping on taking them away can change that while allowing his team more offensive chances, something it desperately needs if it ever wants to hang with the league’s big boys (in high-scoring affairs, that is).

Tom Thibodeau has never been known for coaching teams that play in high-scoring affairs. Nor has he pushed for his players to fly around, or for responsibilities to shift when need be, nor for adapting at all, really. Everywhere he’s gone, he’s emphasized culture and grit, to varying, sometimes middling results, but failed to maintain long-term success. To change that, he’ll have to change approaches every once and a while. I don’t know much, but I know that’s what the hallmark of a good coach is: leading his team on a set course and reacting to snags when they come along.

Coach of the Year is a nice prize. But it’s on to a new year now. And with that comes change. At least, to get better, it better.