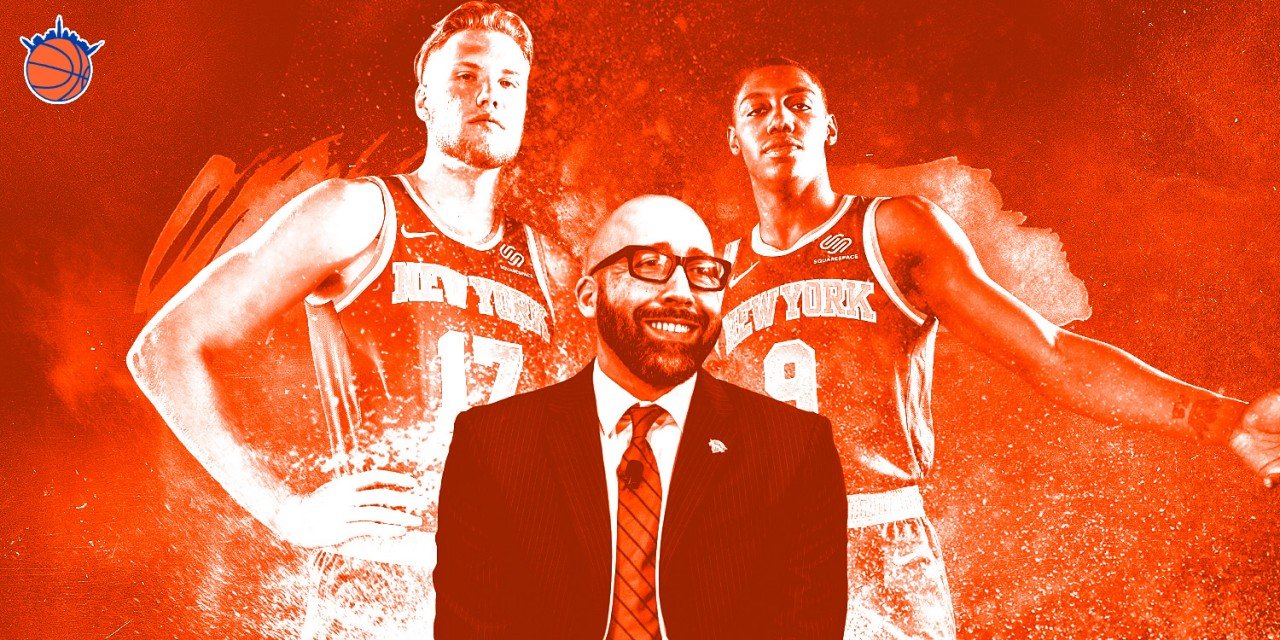 Knicks head coach David Fizdale had a lackluster first season in charge in New York, mostly due to the lack of talent on his team and a fluid roster half composed of G League call-ups and fringe NBA players by March and April. That fluidity would be proved veritable over the summer, as general manager Scott Perry flipped nine spots on the rosters to new players—seven free agents signed and two draft picks from June’s class.

Entering his second season as the Knicks’ leader, Fizdale is under slightly more pressure to truly develop his “system”—whatever that is—and maximize the available talent. That talent ranges from established veterans in Wayne Ellington, Marcus Morris, and Taj Gibson to younger players who figure to make up the “core” of the ‘Bockers going forward: R.J. Barrett, Dennis Smith Jr., Mitchell Robinson, and Kevin Knox.

For now, though, let’s focus on how the former Memphis Grizzlies coach and Miami Heat assistant could impact younger players. We spoke about a similar query this time last season, but at that moment the focus was on then-second-year guard Frank Ntilikina, incoming rookie forward Kevin Knox, and the one-time All-Star forward out indefinitely in now-deposed Kristaps Porzingis.

This time around we’re looking at rookies Barrett and second-round selection Ignas Brazdeikis, plus sixth-year forward Julius Randle, who will play his first season in New York come the fall at the age of 24.

We’re already spoken at length about Barrett during the pre-draft process and in the immediate aftermath of his roller coaster Summer League appearance in Las Vegas, Nevada. Barrett finished his Vegas Summer League competing in five games and averaging 15.4 points. (Never mind the shooting percentages for now.) At his best, Barrett was a strong playmaker, setting up his teammates rather nicely while avoiding sloppy, and unclear, jump shots.

At his worst, though, Barrett had trouble identifying matchups on the floor. He also was in the midst of reworking his jump shot and it certainly looked like a work in progress. Nevertheless, the iffy jumper was less problematic than borderline tunnel vision on the hardwood.

So how does Fizdale solve this? First, the Knicks’ coaching staff will need to slow the game down for Barrett. That could perhaps lead to forcing the former Duke standout to make quicker decisions. The more hesitancy in Barrett’s game, the likelier that spells doom—multiple dribbles at the top of the key leading to tough finishes around the rim with multiple defenders in his grill or a spot-up long two-pointer.

This kind of play featuring a hand-off from another wing player and the screen with an outside perimeter shooter threat from new Chicago Bulls big man Luke Kornet could be very effective in creating room in which Barrett could operate:

Additionally, Fizdale has demonstrated thus far a reliance on curls from his wing players. Picture how many times Knox and Damyean Dotson came off curls for catch-and-shoot opportunities during the 2018–19 season.

Here is Dotson coming off a curl and deciding to immediately pop up to shoot a mid-range jumper over reigning Rookie of the Year Luka Doncic:

Should Barrett find himself in this position, the crafty wing player, at 6-foot-7, may be able to either show off his passing chops and create for cutting perimeter players on the opposite side of the arc, or check a rolling Julius Randle after the screen, or continue his momentum to the basket, draw a foul, and attempt a close-range layup. The jumper is another option, as Dotson hits in the clip, but, again, we want to limit Barrett’s work-in-progress shot for the time being.

The Knicks traded for the draft rights to Canadian wing via Michigan Ignas Brazdeikis, the 47th overall pick in the 2019 draft. Brazdeikis was a constant nuisance on offense for John Beilein, now the head coach of the rebuilding Cleveland Cavaliers. Some of that tracked in July as Brazdeikis made his semi-professional debut playing for the SummerKnicks in exhibition. He was always searching for spaces to get defenders on edge; New York’s Vegas opponents had to be wary of where Iggy was at all times.

Brazdeikis popped off for a 30-piece against the Phoenix Suns last month, a performance featuring a bevy of creative moves around the rim. Iggy was a strong finisher, graceful even, and his touch reminded me of former Knicks undrafted free agent Allonzo Trier in his initial stages with the team.

As ambidextrous as Brazdeikis looked in his highlight moments during Summer League, the southpaw lit up the Vegas strip from downtown, shooting over 50% from the small sample.

Brazdeikis is going to thrive as a multi-dimensional wing for David Fizdale and the Knicks. He’s an elite spot-up scorer, and even in college he performed well handling the ball in pick-and-roll situations. It would behoove the ‘Bockers to play Iggy with a guy like Marcus Morris, the former Boston Celtics forward with a tough attitude who can play both forward positions. Morris is a career 36.0% three-point shooter who can just as easily back up if needed and work the post.

That type of versatility would play well next to Iggy, a downhill player looking for any inch or crevice available to sneak to the basket around his matchup. Willing passers in Morris and perhaps Gibson playing the backup center should be the always eager Brazdeikis.

First, for Randle, let’s examine how he’ll likely operate under Fizdale’s defense. The two-time NBA champion as a Heat assistant often deployed heavy switching in his initial season coaching the Knicks, frequently finding big men changing matchups due to opposing offenses’ screens. That’s where you saw Robinson hold his own against smaller guards or Kornet roasted on the perimeter.

Especially with the many new players together on the Knicks, Randle and company are going to communicate better than Fizdale’s defense last season. That would mean Randle diving back under to pick up his man after the screen, or another player taking Randle’s new assignment should he be pressed by a faster, smaller guard on defense. It’s not an easy task by any means, but it’s the baseline of how the Knicks could slowly turn and close the leaky faucet that was the league’s fourth-worst defense in 2018–19, tied with the Washington Wizards, which hemorrhaged points and saw New York fall into un-comback-able holes.

(Perhaps Fizdale will once again deploy his wretched zone defense next to Robinson in the frontcourt with Randle. That could provide cover for Julius, who has never been known for stout defense, but the enhanced veteran presence on the current Knicks roster may oppose the return-to-college infrastructure on that end of the floor.)

On offense, though, Randle will have the chance the shine as a dominant post player under Fizdale (the foreseeable interior duel with Enes Kanter is already palpable). New York hasn’t exactly seen this type of player under Fizdale aside from Kanter, who was quite limited on offense aside from a post feed from his teammate and a green light to isolate.

We could turn to how now-champion Marc Gasol performed during Fizdale’s brief tenure coaching the Spaniard in Memphis. Fizdale opened up the court for Gasol and recommended the occasional three-point attempt. Gasol was also a fulcrum in the offense, given his passing ability, and awareness.

An All-Star in 2016–17—Fizdale’s first and only full season in charge of the Grizzlies—Gasol scored and dished career highs in points and assists per game at 19.5 and 4.6, respectively. Gasol also recorded his second-best Player Efficiency Rating season and fourth-best Box Plus/Minus (BPM).

Randle has a chance to break out here with the Knicks. Expectations are impossibly low after New York tied its franchise-worst record last season, 17-65, and free agency was more or less not what fans desired (hint: rhymes with Seven Courant). The ex-Los Angeles Lakers lottery pick is a solid ball-handler for his position and could figure as a dynamic scorer in Fizdale’s offense—finding perimeter players like Barrett, Morris, or Ellington for open shots while drawing double teams, or punishing defenders with his imposing post game.

Julius Randle (@J30_RANDLE) out here playing like a guard ?

It’s a new ball game for Fizdale and the Knicks. Randle is obviously the most tangible talent on the team, and he could likely lead New York in scoring. What comes next, though, is Fizdale’s decision to let Randle loose, opening the floor for three-point opportunities, dribble handoffs with Barrett, and smart connections with teammates who are aware of faults in opposing defenses. In many ways, Randle’s success or failure next season could illustrate how far the Knicks can go, too; he’s a new player with potential, playing under a new coach and new teammates. But guidance and leaning into what his teammates do best could unleash the beast.

»READ: With free agency over, the spotlight shifts to Fizdale to juggle young talent and older vets